Who Runs the GOP? 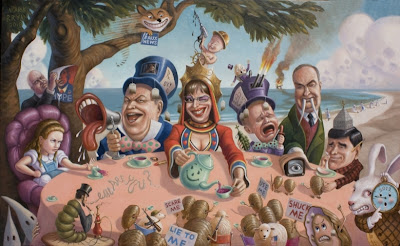 I was sure the GOP was on a steep downhill trend back in the 1980s.  I figured it would hit bottom sooner or later and they would begin to show signs of sanity again.  I guess I need to have more patience. But let's face it, thirty years is an awfully long time to watch a party continue to fall.  Maybe there is no bottom because they are hard into a an ideological free fall into a pit with no bottom.  Maybe it is the proverbial corner and being painted into it by their own rigid set of ideals.  Whatever it is, the GOP have definitely become slaves to an unrealistic agenda and are now tools of fringe ideologues whose oars only intermittently hit the water in smooth strokes.  Those intermittent strokes of sanity seem to be less frequent each day the presidential election inches closer.  Their panic boldly displayed as they have begun to turn on themselves in ugly public displays more common among bickering Democrats.

One British writer, Jonathan Freedland, contends it is Fox News who has turned the GOP into what they are now.  He offers up a compelling argument devoid of the passionate partisan claptrap that usually accompanies such claims.  One quote by David Frum, former speech writer for George W Bush is telling :

"Republicans originally thought that Fox worked for us – and now we're discovering we work for Fox."

If a Liberal said this, it would be passed off as more predictable ditto head lackey rhetoric  from the Left.  But in the article, Freedland quotes more than one "conservative" voice regarding their concerns over Fox and its influence over the GOP agenda.  I won't rehash his article here.  But take a look, it is a very interesting insight from someone who sits outside the fray.

For years I have loudly whined about the two parties we have controlling our lives.  I have indicated that I would love to see the two party system self destruct.  ...................Hmm...............Now the phrase " be careful what you wish for" comes to mind.  Now that one half seems intent on destroying itself, it looks like they are determined to take us with them.  I should have seen this scenario coming, but I did not.  I was so full of my righteous indignation, I only wanted it to fail without regards to who was hurt and how much damage would result.

So I sit here watching the system I grew up in suffering serious tests to its viability and instead of being pleased, I am sad.  I know no matter what the fallout is, those creating the havoc will most likely come out smelling like roses and the grunts on the street will pay the price as we always do.

It's all bullshit and smokescreens, no one knows who runs any of this bullshit.

You may as well go enjoy some magic mushrooms.

The article by the Brit is an interesting read. Helps explain the flavor of the week we have been seeing in the GOP candidates.

For years I have been saying I hope to live long enough to see the GOP become the Whigs of the 21st century. They are already the "Know Nothing Party" and that will hopefully be their downfall. As for whether or not losing the Repukes will be a bad thing, I think there may be a period of turmoil until some other party will take it's place. If the GOP were to become inconsequential, then we can work on fixing the Dems, if the GOP are the abusers, the Dems are the enablers.

We're all gonna get the shiv in the end, so apocalypse now.

So I sit here watching the system I grew up in suffering serious tests to its viability and instead of being pleased, I am sad. Me too dear man..me too.

Yep the meanies and the weenies. They are just two sides of the same corporate controlled coin.

"...those creating the havoc will most likely come out smelling like roses and the grunts on the street will pay the price..."

Sounds about right. I'll take some of those mushrooms.

Maybe a third, or even a fourth party is what we need. With three or four parties represented in Congress a filibuster would be much more difficult, and all parties would need to be willing to make concessions in order to get their agendas passed.
the Ol'Buzzard