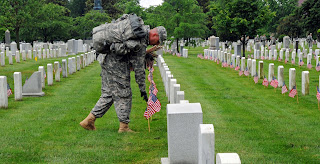 Well, here we are celebrating another Memorial Day weekend.

This is the weekend that kicks off the summer season in the US. All the hub bub and stress of plans well laid months ago will play out this weekend. Planes will be full.  Highways will be full.  And if everything goes as planned, stomachs will be filled with food fresh off barbecues coast to coast.

Yes, another happy break from all the drudgery and everyday lives we all deal with most of the year.

Tomorrow, parades will break out.  Moms and Pops will corral their broods and line Main Streets  everywhere. They will watch high school bands and old men stuffed into old uniforms doing their best to walk upright. They will witness America celebrating remembering those who have given their lives in defense of our country.

In the meantime, Arlington Cemetery is running out of room.
Posted by MRMacrum at 9:45 AM 2 comments:

Email ThisBlogThis!Share to TwitterShare to FacebookShare to Pinterest
Labels: A Perfect World

For someone who scoffs at the notion there is actually a God who gives a shit about us and our petty lives, I sure think about religious stuff more often than one would think.  My feet are firmly planted on the maybe there is a God and maybe there is not fence. Why?  Well, this God has not introduced themself to me in person and basing my loyalty on faith is a crap shoot at best.


The Bible is the Lord's word written down by humans setting up a framework that neatly explains, excuses, and condemns every last one of us to the role of slack jawed minion to one of two masters.  I won't belabor the point, but I think organized religion is bullshit.  Done more damage over the ages than it has helped.

But that does not mean there is no Creator.

Regardless, the notion of Rapture has popped up it's silly head recently.  I checked my favorite Rapture website for the latest and well..................

Apparently, moving the US embassy to Jerusalem is another sign the End is just around the corner.

Add to that now we can expect China to invade the Middle East in our near futures with a 200 million man army, while Israel will ally itself with Russia to , well, I guess I am not really sure, but you can bet they are gonna whip someone's ass.

Oh yeah, and Bill Gates is responsible for the latest Ebola outbreak in Africa.  This site has its fingers on the pulse of ........ hmm, not sure whose pulse or what pulse, or is it they just like to make shit up.  Anyway, the site is a hoot.

I spent some time on "Rapture Ready"  .  After all, it might behoove me to prepare myself some.  I won't need to bring clean underwear I guess.  All that will be provided when I step up to the allotment counter just inside Heaven's Gate.  That is where all Christians find out what neighborhood they will be living in.  The site's page, "Mansions in Heaven" set forth the type of home one can expect based on their level of piety and subservience to the Creator.

Unfortunately I do not rate even the "Quitter's Mansion".  Apparently this is the heavenly home of those who  ......  was a believer in name only. Angels began to build him a mansion, but they stopped work when it was clear the client had no intention of fulfilling his commitment.

Sadly, based on the choices available to me and the time I have left to maybe get in God's good graces,  it looks like it will be a cardboard box under an overpass for me.  And that is if I am lucky.  Most likely scenario has me deported south of Heaven's border where Satan knows how to deal with heathens like me.

And I do believe in Satan.  I have not met him yet, but I have seen him on TV.  He has orange hair and is the greatest president in like forever.

Email ThisBlogThis!Share to TwitterShare to FacebookShare to Pinterest
Labels: Answers to burning questions, Bozos, Inspiration, Religion, Sanity, Sleepless Nights, What is It?

What is there to Say? 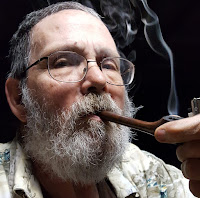 What is there to say?

When I have the urge to write lately, all I want to do is dislodge the lump of disgust I have caught in my craw regarding what my country is going through.  Venting my anger at least used to make me feel better, if only for a moment.  Now, I know that venting will only fire me up even more to the point that even a second doober won't bring back a smile.  Because of this, I have refrained from blogging.

It is not even about Trump anymore or the morally / ethically challenged Right and their spineless  ways.  I have grown used to the "fuck the country, we want what we want for us first bull shit" Right Wing policies and two faced rhetoric from so called conservative mouthpieces.

And to be fair, I am even more than a little disgusted with the Democrats.  Now is their chance to take away the message from the Right and they are sitting on their side of the aisle, wringing their hands  and mumbling among each other like a bevy of grandmas hard into a group quilting bee..  And in the meantime, the Right is still able to control the narrative.

Yeah, seems gutless is the one recurring theme on both sides.

I had a conversation with a friend who is a registered Republican, but who is actually closer to a Bernie Democrat.  Hates Trump and most of the madness playing out on the Right.  He thinks the biggest problem is polarization.  Neither side willing to give an inch.  Yet, he feels the Democrats need to be more willing to compromise just to get the bipartisan train into gear.

"Well, the Republicans do have the majority, ... uh maybe the Democrats should...."  His face told me he was reaching for any straw in sight.  " ...... aw, fuggit,  yeah fuggit."  My friend never said "fuck".  It was always "fug" and all the derivatives he could turn.

Again I said, "Fuck that. ..... And fuck the Republicans. .........  Ever since Newt Gingrich and his "Contract with America" cronies in the 1990s, the party most likely to compromise has been the Democrats.  Maybe the Republicans need to step up and moderate or , here's an idea, drop their "my way or the highway" attitudes.  That the Right cannot get anything done is more about their inability to govern than anything the Democrats have done...............  The two of them have served this country poorly for years now."

As I filtered this conversation through my undependable memory banks, the answer for it all again stood out just as it always does.  Not just one answer but a multitude of answers that need to be recognized by the largest group in this shit fest.

As long as the American Public prefers to walk around clueless to the manipulations carried out  to control them, we will always have sleazy leaders who have no morals or have no ethics other than their own self interest.  Our leaders are but reflections of ourselves.  ..........  We buy into the fear our favorite blowhards regurgitate instead of recognizing the real threat that is buying into over the top imagined worst case futures.  But it is easier to be afraid than show any composure at all.

Suck on that America, you bunch of chicken-shit apathetic hateful jerkwads.

Email ThisBlogThis!Share to TwitterShare to FacebookShare to Pinterest
Labels: Bozos, Politics, Rants, Silent Conquest of Ourselves, What is there to say?
Newer Posts Older Posts Home
Subscribe to: Posts (Atom)