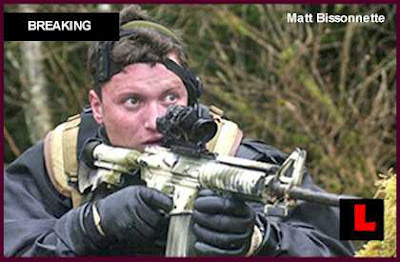 All the hoopla over the recent book, "No Easy Day" makes me smile and frown at the same time.  Matt Bissonette, AKA Mark Owen, the former navy Seal who penned the account makes claims that in small ways differ from the official version.  Whether Bin Laden was killed in the room or while he stuck his head out of the door is of no consequence in my opinion.  The man is dead and gone.  For me that is all that matters.  And Matt's claim that the book is not political statement is not his call to make.  It has become one whether he wants it too or not.  His back handed criticisms of the President and his part in the affair  mean nothing to me.  Matt was but one cog in an mission machine made up of many cogs and much planning far above his pay grade and I assume intelligence.  The President had to make the decision to initiate the plan.  It was Matt's job to follow the orders to carry it out.  Had the mission failed who would be blamed?  Certainly not Matt.  The president would have had to eat the blame.

That the President is garnering some political capital from his decision is what politicians do.  I wonder what Bush would have done after the attack, given his publicity hogging landing on an aircraft carrier with a sign in the back ground that said "Mission Accomplished" and in reality, the mission had only begun.

Politicians never miss a chance to bank good publicity.  It isn't right and it isn't wrong.  It is what pols do.  On the other hand what Matt did when he wrote the book was wrong on many levels.  The least of which was that he chose to disrespect the long standing tradition of the Seals to not talk publicly about their missions.  Not only is he bragging about his part in it, he is most likely going to make millions off the book.  Shame on him.  And the fact he did not not even use his own name tells me he is probably not someone I would want to have my back.  The Seals are better off without him. 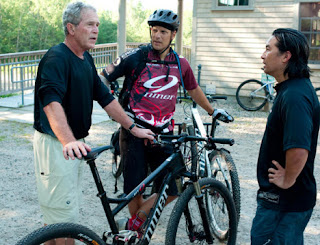 So I have been MIA awhile now.  Figured I'd stop by and put a few words to paper (so to speak).  Since I have not been watching, listening, or otherwise paying any attention to events outside my small parcel of the planet, I have cleansed myself of the need to vent over stupid actions by stupid leaders.  Besides, paying attention to what's in front of me is a full time job it appears.

GW Bush rode by me on a mountain bike last week.  Keith and I said, "Good Morning George".   Dubya grinned and we continued on our way.  Of course in tow behind him was a group of maybe 30 local riders who comprise what is called "Peloton 1".  There was security everywhere.  ATVs, big guys and gals on mountain bikes, and the appropriate number of black SUVs all over the area.  That was one expensive mountain bike ride.

Keith and I had no clue the ex-President was in the woods over to the Smith Preserve in Kennebunk.  We were glad he was finishing up and we were just getting started.  We had the woods to ourselves once the sweep security rode/drove past us.

I hated the man's politics and many if not all the actions he put in play during his reign as POTUS.  But seeing him grunting it out on a mountain bike has taken the edge of the animosity I have for him.   The fact we share a common interest and he is no longer large and in charge has mellowed my opinion of the man........but not what he did to us.