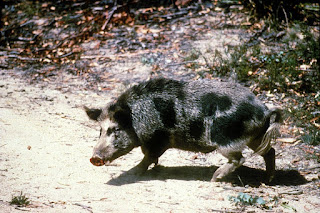 I was reading the Google news feed on my phone this morning and a story about the 30-50 pro assault gun meme popped up.  Apparently a fellow from the South who owns some property asked how was he supposed to shoot 30 -50 feral hogs that run into his yard in 3 to 5 minutes without an assault weapon.  He was inferring the danger to his children.  The article from "Slate" went on to agree he had a point.

Now this is where I do the predictable thing and talk about how his argument is stupid, great, or something in between.  No, I won't do that.  It is the background of this story handed to us as factually based I have a problem with.

Once the purpose of the article was solidly in place, a brief history of feral hogs unfolded, giving us their past and their present and the doom and gloom if their populations are not put in check.

One claim in particular caused me to check its accuracy.  "Now, 48 states have reported the animals’ presence..........."

I had not heard of any feral hog sightings in Maine, and having actually followed the rise of the feral hog problem in previous years, I understood the problem to be one mostly located in the Sun Belt and not up in the frozen outback states nestled next to Canada.

I jumped all over it and googled faster than you could say "Google It".  The first article that popped up was from a local paper, "The Portland Press Herald".  They claimed Maine has no feral hog issue as there are no feral hogs that have encroached into Maine. According to the article feral hogs only inhabit 39 states.

Fast forward now to my second Google.  An article in the "Central Maine Sentinel" told the story of a Russian boar killed in Somerset County in the yard of a very surprised farmer.  Officials were sure it was not born in Maine and it did not travel this far from another state.  It was most likely one that had escaped a state licensed game preserve.

So what is my conclusion in all this?  The people who write and deliver the news need to be especially careful now days to frame their stories in a way that does not give the wrong impressions.  In other words, report the facts that are not up for interpretation.  And if the facts are up for interpretation, say that.

Fake news is fake news even when it is unintentional. 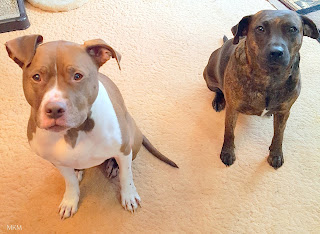 Its been a beautiful morning here on Sam Page Road.  Sun's out, 60 degrees or so and the humidity feels almost non-existent.  I took my dynamic duo, Maggie and Sammie, for some leg stretching over to Mary's Woods across from my place.  Sammie is on loan from my daughter and her SO while they are off gallivanting who knows where.  I don't remember gallivanting so much as they are at their age.  But that is to be expected.  There is a lot I don't remember from 35 years ago.


Once safely cross Sam Page Road, I released both.  Maggie took off into the pucker and Sammie waited patiently for me to throw the Chuckit.  When I Chuckit, Sammie will fetch it at full tilt boogie until he can't run anymore.  His chest heaving hard, he finally collapses at my feet.  The ball from the last Chuckit firmly clamped between intimidating teeth that refuse release until , well, its been 30 minutes since we came back, and that damn ball is still in his mouth. A single minded mutt for sure. He loves his Chuckit. 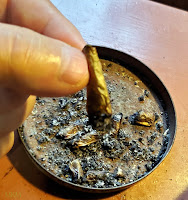 Like me, Maggie does not understand the concept of Chuckit.  She watches Sammie run himself to exhaustion chasing a stupid ball.

"What a brain dead dog he is", she mutters to herself.  Maggie knows real fun.  She runs and runs, just to run until her eyes cross and her tongue is hanging out with her dog spit tricklin hard off the tip.

Sammie looks at her and thinks, "What a dumb mutt.  She runs and runs and gets nothin done.  Me, I at least bring the ball back every time, never fail, you can depend on me yes-sir-ree-Bob's your uncle."

Anyway, have a great Monday.  Just don't burn your fingers.

The Right is to Blame 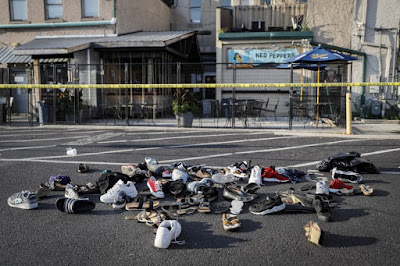 According to Mother Jones, there have been 113 mass shootings or killing sprees in the States since 1982.  We can now add another two incidents and 29 more fatalities to the 1035 people killed since the early 1980s.

Some folks may try to minimize the effect of 1064 people killed in 37 years as a price of a free and armed society.  .......... Bullshit.    Others might counter that mass killings only happen a few times a year.  Again Bullshit.

What is the one common denominator that might explain this outrageous increase in mass shootings over the last four years?  I would conclude it was the poisonous political and social atmosphere Donald Trump pumped up to a boil when he disrespected the country with his presence.

And instead of helping to rein in this pitiful excuse for a national leader, his party, the GOP, sit on their hands, look down at their feet, or actually root this asshole on.  And the Right claims to know a patriot when they see one.  They haven't had that ability since the Rich took over the party in the late 1800s. 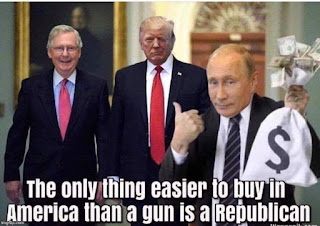 “Mitch McConnell is a man that knows less about Russia and Russian influence than even Donald Trump. And I know nothing!”

Again Trump lays a whopper on us and we don't even blink.  Not anymore anyway.  It is impossible for anyone to "know less" about anything than Donald, I'm Vlad's Bitch, Trump.  I believe the man takes pride on how empty his cranial void is.  Nobody is this stupid unless its on purpose.  Trump had to and continues to work overtime on keeping his stupidity sharp and ready for any issue he might be needed to not have a clue about.

And it appears the GOP proletariat has embraced the clueless-ness and the stupidity of their chosen leader.  Together they wallow in ever deepening pools of nincompoopery.  They have been offered life jackets, yet they still refuse.  They would rather tread water waiting to drown than accept the help of those awful Socialist loving Democrats. 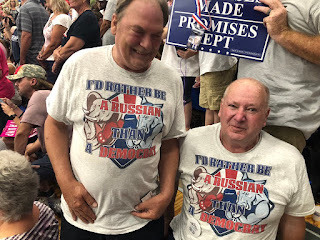 A sign of the GOP's intractable course of stupidity, is their record of marketing that stupidity through retail sales of racist hats and Russian Love tee shirts. Their their drooling minions eat it up.

No better example of the brain dead nature of the Right is the "I'd rather be Russian than a Democrat" tee shirts and the uninformed reasoning of the two guys made famous when they were photographed  wearing the Tees at a Trump rally.

Of the shirts, one of the two, Tim Alicie said,

"We're not traitors by any means. And we're not Russian spies or cult leaders, ....."

"........ We've been working with Russia with the [International] Space Station, and doing a lot of things with Russia, not just that," Alicie added that critics of the Russia shirts "need to be a lot better informed."

Now there's some irony for ya.