People love labels.  We humans seem to want to label everything.  We put labels on clothes, on pillows, on ourselves and on other people.  We do not seem to care if the labels we assign ourselves or each other fit into the definition of what that label originally meant.  We do not seem to care what someone else labels themselves if we have decided on a label for them we like instead.  You are not a Conservative, you are a Fascist.  You are not a Liberal, you are a Communist or maybe a socialist.  Seems those two have become unfairly and inextricably entwined with each other because like our joy at mixing metaphors, we just love mixing labels.

Most of us have no clue what these labels originally meant, because all of them seem to be malleable ideals that can be manipulated to mean anything we want them to.  I have given up trying to sort out what someone is other than their sack of ideals hangs left or hangs right.  They can call themselves or me anything they want, but what they are does not usually or comfortably fit within the parameters of the label they have chosen.

I won't pretend I am any better than anyone else regarding labels.  I can label with the best of them.  But what I won't do is label myself, as it seems I always get it wrong.  I prefer to go through life being whatever anyone claims I am.  I admit that I tend to be labeled a Liberal Loser most of the time.  But there have been times when  my liberalism was not enough for the crew I was hanging with and words like Winger were flung in my direction.  I have been called an Atheist, yet I believe in a higher being or committee of beings.  I have been called a Yankee when in the south and a Reb when in the north.  It seems everyone knows what I am but me.  And that pisses me off.

I am not pissed that others label me.  I am just angry I cannot seem to get comfortable in anyone's camp, religious, political, or civic.  Not a single group out there makes me feel at home.  Never have and I assume never will.  I grew up that way.

I'd love nothing better than to be a liberal, but well I think owning guns is fine and I still view Goldwater kindly and the over the top Left wing agenda of PC can really chafe my naughty bits.

Being Conservative would be nice, but the kind of false Conservatism being foisted upon us currently does not work for me.  Remember my fondness for Goldwater.

I once considered being an anarchist.  I even had long winded discussions with a self avowed anarchist who did his best to live up to the label.  My problem is I do not have the optimistic view of human nature it would take to get behind Anarchy.  I believe in private property.  I believe in the rule of law.  If for no other reason to control the loose dogs like me and much worse that walk the surface of the planet.  Most of us need boundaries beyond which there should be serious penalties for crossing.  Grant you  I think most of our self inflicted boundaries are unnecessary.  but there needs to be some.  Regardless of what people might think, we do not live in Utopia.  So Anarchy is out.

What about Libertarianism you say?  Wouldn't that fit the bill?  Nah.  Because then I would be lumping myself in with a group that has no clue what they are either but came up with a label just because they needed one.

All this self recrimination, self examination and self flagellation is but beating a dead dog.  It is a waste of time to anguish what I am when what I think I am, others always have a different opinion.  But I think I have finally figured out what I am and whether others see me this way I do not care.  I am from now on and even before, a card carrying Contrarian.  At least I will be as soon as I print up some cards.

The card I hand out will have printed: 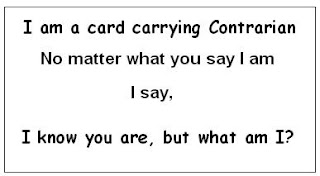 boy&howdy.... youse sure been posting bunches...

Hey, someone labeled me once.. called me a beer snob. I appreciated that.....life is too short to drink bad, cheap beer. And I am not conservative in my consumption... I drink liberally .... but usually as a moderate.

A lot of people see things as black and white, either/or. I see things as a lot of shades of gray. For instance while I believe people have the right to own guns, there should also be limits on the types of guns people can own. NRA types think we should be able to own anything up to and including small tactical nukes.

As for belonging to groups, I've been in a few, school, the military, etc and didn't really belong in any of the groups I've been in. I like the Groucho Marx saying, "Any group that would have me as a member, I don't want to join." In the past I have thrown out that line and been told that I must have a low opinion of myself. NO, I have a high opinion of myself and a low opinion of other people especially those in groups!!

I'm a progressive. I'm for progress. I like the way that sounds.

I'd love nothing better than to be a liberal, but well I think owning guns is fine and I still view Goldwater kindly and the over the top Left wing agenda of PC can really chafe my naughty bits.

Pretty much sums me up as well, add to that I like animals and hate to see them abused but I will jump at the chance to eat Bambi, Sammy Squirrel, or any other tasty animal.

I too am a contrarian.

As a Gregorian Christian Republican, I take issue with your liberal post.

So you're really a Pee-Wee-ian?

Hmm. Confession time about how I label our host: I generally think of you, Crum, as a liberal. But every time you mention Goldwater or Nixon in a positive way, I think no, Crum's more of a centrist libertarian. And then I turn in circles and realize that you just can't be labelled.