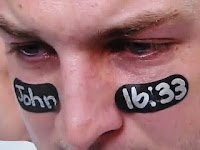 So yesterday I blogged my disdain for those who would inject specific  "traditional values" into our lives whether we wanted them or not.  Again I feel the need to offer up some kind of counter to my previous post.  Neither side of this debate is guilt free when it comes to wanting to shove their values down our throat.

The Tim Tebow hoopla.  I don't care one way or the other about Tim Tebow.  I wish him well unless he is playing my Pats, then the gloves are off.  But I have no opinion of him wearing his faith on his sleeves, under his eyes or his tendency to drop to bended knee and thank the almighty for that touchdown pass.  He has the right to do so, period.

I find his on the field religious displays no more obnoxious or less obnoxious than some of the other silly crap NFL players pull.  The end zone dances, the chest thumping, the over the top WWF type displays of manly behavior make me smile.  Guys can be such idiots.  Tim Tebow included.  It's part of the show.

I watch football to watch football.  The extraneous displays I usually pay no attention to.  Why can't the whiners of the secular kind do the same?  They tolerate the jive ass stupid dances.  They scream their support when their line backer thumps his chest after a sack.  Why all the panty bunching over a guy who wants everyone to know he is a God fearing man like my neighbor and the forty foot cross he erected in his front yard?

Like it or not, Tim Tebow's and my neighbor's right to broadcast their faith is equal to someone's right to not remove their hat when the flag is raised or lowered.  If we are going to insist on calling ourselves a free society, then we need to tolerate harmless and personal displays of that freedom.  Tim Tebow may have another agenda by broadcasting his religious beliefs for all to see.  And maybe he doesn't.  Regardless, it is nothing to get upset about.
________________________________

An afterthought and a good reason why I have no right to criticize jocks for stupid ball field antics.:

I was fiercely opposed to the war in Vietnam during my college days.  I was also a jock who played lacrosse for Towson State University in Towson, Maryland.  One of our games conflicted with a huge march on DC some 60 miles away.  Sad that I could not go, I decided to show my solidarity with the cause by wearing an anti war head band around my lacrosse helmet.during the game.  My coach shot me dirty looks, but said nothing and even played me.  As I was mostly a defensive middy, my specialty was going in and beating the crap out of the opposing players.  I lived to hit.

So here I am wearing a headband that tells everyone I am into Peace Love Dove Groovy Man and by the second half  I have already been penalized a couple of times,  Cost the team one and a half minutes.  Thankfully the team we were playing were chumps and couldn't score.  There was one middy on the other team who was better at illegal checks than I was.  He had gotten more cheap shots in on me than I had on him.  He had not been caught and I had.  I was some pissed off.  With ten minutes left in the game we are completely away from the play.  The ball was being nancied back and forth between some wimpy attackmen.  This guy chokes up on his stick and jabs me hard in the stomach knocking the wind out of me.  No ref saw it.  Once I gathered myself and enough air in my lungs, I went after the guy, swinging my stick and beating the bejesus out of him.  The ref did see that.  I was ejected from the game and well, my nickname on the team  from then on was "Peace".
Posted by MRMacrum at 8:44 PM

Well, I don't watch any football but I agree with your assessment about people's rights to be as silly as they please - as long as it doesn't frighten the horses.

Have a great day, Crum.

Oh, like Jefferson wouldn't have beat the hell out of Madison if he had been cheap shotting him all throughout the convention.

But yeah, Tebow's Jesusery doesn't bug me as much as every talking hairpiece blathering on about him being the greatest field general since Alexander the Great, which speaks more about their stupidity than Tebow's ability to annoy. Plus he plays for Denver, and as a Browns fan, I need not say another word.

there is no peace in the arena of sports..I love that story.

I have no idea who Tim Tebow is, and could care less.

Personal religious conviction doesn't bother me - it is organized religion (the same group that brought us the dark ages) that wants to move this country to a fundamentalist Christian theocracy that threatens me.
the Ol'Buzzard