A World of Whiny Little Bitches 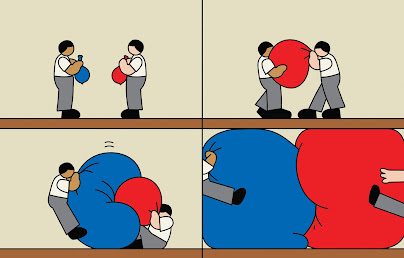 While ideologies do battle in ornate houses made of rules and laws, the real damage done is found on the air waves and inside internet jungles where Truth is created out of thin air and successfully feeds the fantastical imaginations of a stupid and ignorant multitude. Facts don't matter.  Truth is kicked to the curb.  Outrageous lies repeated infinitely become the accepted narrative.

Anonymous Wingers sit back after posting their favorite made up shit.  They are satisfied they have owned more than a few Libs.  They light their virtual smokes, kick back, smile at the ceiling and wonder if this might not be better than sex.

Life has become an in the moment experience where everyone becomes a target for the Winger's years of suffered existence in a perceptual world constructed out of self inflicted hate and fear.  They are now whiny little bitches and would love it if everyone else would be too. Misery loves company after all.

The Libs are slow to catch on.  Their attempts at utilizing common sense and logic falls flat. Their feelings are hurt when they are accused of being elitist assholes who look down their noses on the bedrock ignorant of the Right.  Meanwhile, Wingers are sure the Libs are nothing but agents of Lucifer and as we all know, only God Fearing folks know what a Patriot really is and how to wave the flag properly. Considering the notion of tolerance as more important than owning an AR-15, the Libs are sure Wingers are nothing but selfish bastards trying to put  God n Guns before their country.

Hurt feelings all around soon turns to anger all around.

Logic, facts, and empathy have failed. The Libs slip into the same ditch with the Wingers and it becomes a shit flinging, no holds barred virtual  bitch fight. Sanity has left the battlefield leaving Truth and Wisdom nothing but trampled leftovers of fruitless hate and discontent.

There are no winners when everyone loses.  No one on either side seems to care.  They both have caved to fighting the good fight with no regard to how it will all turn out.

And so it goes.  As this mission to turn us into a world of whiny little bitches finds new heights and direction, the reptilian enablers smile from their polluted bogs and ponds because they have known for years this is definitely better than sex.  Their job done, they roll back over and slip back into the murky grease stained waters they exist in.

What the Hell.  We all have to serve somebody. If it cannot be serving ourselves, it might as well be the Them who tell us lies we so desperately want to believe.

Apologies for taking liberties with the King's English. Knotting up the panties of the grammatically correct was not my intention.  Just having some fun is all. I usually try to do a better job.