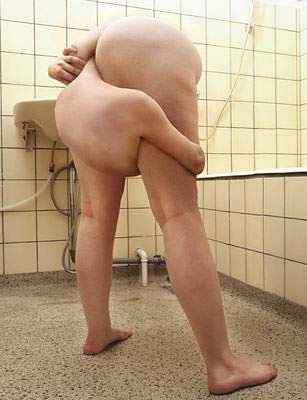 When I came across this photo I thought, "Yeah bud, I know how you feel. Been there, done that."

Some days I wake up and I just can't seem to dislodge my head from my ass all day. Wake up inserted hard and go to bed with the same shitty outlook. I sometimes wonder if others start their days like this. Is it me? Or do we all have days like this?

Nevermind the forest. When I find my vision blocked in such a manner, I can't even see the trees. Taking Life with philosophical resignation is not on today's menu. No sirree. I am determined to have myself a wonderfully shitty day.

So I get up and look for a cat to kick. Leave the seat up, leave the bed unmade, and lay my plans to bring gloom and disaster to my day. And like a exclamation point to my carefully planned negative getaway, I step on a cat killed woodsie creature trophy crumpled and bloody at the front door. "Just Bleepin great."

My shoulders droop and a disgusted sigh escapes as tiny varmit bones crunch under my flip flops. Like a dead man walking, I slowly shuffle down the drive to fire up the truck that will deliver me to the day's Hell.

Be careful what you wish for.
Posted by MRMacrum at 2:42 AM 2 comments:

The New Drive In on Sam Page Road 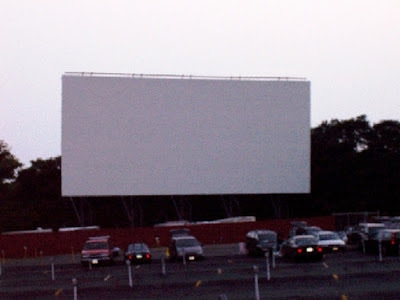 It's about time for chrisakes. Threats to build that new Drive In Moving Picture Park and Extravaganza with the panaromic vista-gigantic screen had been thrown around for the better part of a year now. Finally, the wide screen and seriously decent stereophonic sound has found it's way to Acton, Maine.

I sit here in front of my new computer and monitor and feel as if I had just put the ole GMC in Park on the front row nestled right up against a speaker stack 10 feet high outside the driver side window. I want to tip my head back in order to take the whole screen in. Turn the volume up to wow, sit back and let the images on that big balls 19" monster flat screen perform their magic.

I know, I know. Down in the big city where folks are squeezed together like orange concentrate and what is hip is never the same 24 hours later, the addition of such an upgrade would be a ho-hummer. You all just nod and say, "That's nice Mike, good for you." Yawn and move along your way. But here in Boonieville just a few years into 2 decades ago, we simple country folk who still wear homespun cloth on our backs gaze with mouths wide open and eyes fixed on the wonders that electricity has brought us here in the sticks. 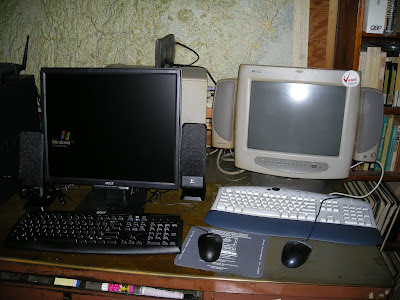 My old Windows 98 PC sits pitiful and inadequate next to this new behemoth. It's nancy 13" screen, a poor imitation of what it pretends to be. Whose is bigger blatantly obvious, this pissin contest is no contest. I have both machines plugged in and on overdrive. Transferring data, files, links, and assorted eccentricities I felt important enough to save 8 years ago, so they must still be important. With my other hand I am editing through Incubus and Everything CDs I ripped to come up with my very first playlist. It's gonna rock. And finally with the volume past sane, I am also attempting a multi-task hat trick and post to my blog just to keep things interesting and me on my toes.

I guess you could say I am having fun. Enjoying myself immensely. Self-satisfied and grinnin ear to ear. New toys will do that.
Posted by MRMacrum at 9:44 PM No comments: 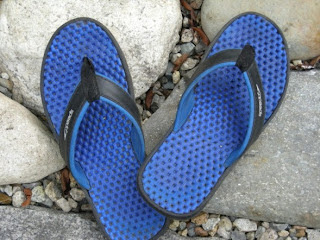 Running a small business in a small town with shallow pockets can be a tough row to hoe. The struggle to keep my head up in cheerful demeanor can sometimes be like pulling teeth. When vendors are barking at the door and that last repair was another nightmare in a string of nightmares, it is easy for me to fall into the "Feel sorry for my sorry ass" pit. So I look outside the normal defenses to this kind of funk for salvation. I look for perspectives that might refurbish the silver in the cloudy lining of my life at that moment.

The flip flops above represent one such search to redeem faith in what I do to put food on the table. They have been my work shoes for the last 3 months. Providing minimal protection from the normal accumulations on the bikeshop floor, they also allowed my feet the joy of working almost naked. Everytime I put them on in the morning to walk out into the world, they remind me that no one has more control over my life than I do.

Trade offs. Compromises made to acheive perceived ends. Giving up the bigger pay check working other people's agendas to search out and work my own. Creature comforts failed to do it for me. Wearing flip flops to work and cycling shoes for play does.

Posted by MRMacrum at 5:44 AM No comments: 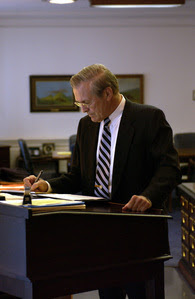 No, this is not some rant regarding the politics or policies of one Donald Rumsfeld. Millions of heated words have been aimed at him. Deserved or not, he has certainly been wrung through the wringer. I have no intention of trying to squeeze him any more.

My comments today are more to recognize one peculiarity of his I find fascinating. Fascinating in that once I noticed his, I noticed mine. It is his habit of working behind a stand up desk. The man does not sit down in the normal course of his work day.

Many folks find this an odd way to conduct business. I did too at first. But then I heard an interview with him regarding his stand up style. He felt more alert over the course of the day if he remained standing. He said his back did not ache from sitting for hours on end.

Hmm. I thought about this. I remembered my days as a truck driver and the stupid number of consecutive hours I would spend behind the wheel without a break. And then jumping out of the cab only to find my back hated the few minutes it always took me to straighten up. I notice also, this same unpleasant tendency after I have been sitting in front of this 'puter for more than an hour or two.

I then regarded my typical workday these past 17 years. While I did not work at a desk much, I did work at a tool bench and on my feet repairing bikes. I thought the lack of back pain these past years were the result of lighter workloads and more awareness on my part. Now I wonder. Maybe being on my feet all day had more to do with the pain free back than anything else I may have done.

Donald is no pioneer. More of a retro grouch. Stand up desks were actually the way to go when desks really got going. In 1800s England, I read there were more stand up desks in operation than sit down ones. Bob Cratchett from "A Christmas Carol" standing all day crunching numbers for Scrooge was the norm, not the exception. Churchill, Jefferson,Virginia Woolf, and Hemingway all stood while they toiled away at their desks.

There is a price to pay for standing all day. Sore feet. But it takes me 8 hours of standing to bring pain to my dogs and but an hour sitting can make my back complain. Who do you keep happy? The feet will just have to suck it up. My back rules this debate.
Posted by MRMacrum at 6:21 AM 1 comment:

Sun's Out - Guns Out 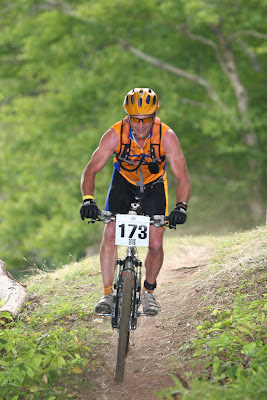 With guns out, Dave the Punk rips up the singletrack at Great Glen a few weeks ago. Yes ladies, those are his real arms. Man arms, streaming sweat as he pumps more testosterone than a man his age should be pumping. I hear when he shows up to the local DQ sportin his latest tye died sleeveless T, the young girls take notice and ole ladies swoon.

Dave is a recent friend. By recent, I guess that means within the last 10 years or so. The older I get, the period that encompasses "recent" expands. Anyway, Dave came in my shop 8 years ago to check out my store. He had been a customer of my previous shop, but frankly we never connected there.

Dave had bought a Rocky Mountain "Instinct" from the local dealer who had the line before I did. He was looking for support for the bike. Cool. I would gladly provide him with said service. So it started. This friendship that would grow from a commercial relationship.

We caught a few rides together. The first one, I was so cocky and full of myself, I counted on having to hold this flounder's hand as I punished him on some of our local trails. Right. While he did not spank me badly that ride, he still spanked me. It was the first of many spankings I would endure the following 8 years.

I never minded having my ass handed to me by Dave. He always rode the ride, not the other riders on the ride. He went with the flow, no matter who showed up.

As our freindship developed, I learned in dribs and drabs, the history of Dave the Punk.

Grew up in north Jersey, dropped out, joined a commune in Massachusetts that would later become the largest one in the country. Then at some point he dropped back into the real world again ending up in Maine with other commune escapees who created Renaisance Greeting Cards in Sanford. He built their display cases. He then split off and founded his own display fabrication operation, Millrock. After some years, that was sold and Dave is now working for the new owners as chief designer and main man to get anything done.

And all this time Dave was a busy man on the domestic front. He married 3 times. Had some kids. Shared some kids. And after it was all said and done, he gets along well with all of them. Juggling all those potential family fire pits is a testimony to Dave's mellow and centered outlook on Life.

Now single again, Dave is looking for that next big adventure. Like windsurfing, snowboarding, and cycling are not enough to fill the void. Damn fitness freaks.

Without getting all mushy, teary eyed, or gushy and stuff, I would just like to impart my strong feeling of attachment to this guy who kicks my butt. Somehow we connected and I feel comfortable knowing I have a friend here I can count on.
Posted by MRMacrum at 5:15 AM 1 comment: