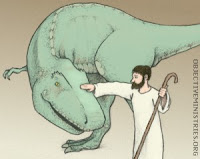 I have been under the weather these past few days.  I missed quite a bit of what is happening out there in the big world.  So I punched up the Drudge Retort - The site set up to counter the Drudge Report.  The headlines are always written to catch the eye and several did.

Chris Wallace contends that should Ron Paul win the Iowa Caucus, it is not a victory for Paul, but a defeat for the Iowa Caucus.   Hmm.  Ron Paul gets no respect even when he polls with serious numbers.  I hope he runs a Ralph Nader style candidacy.

Some Fraternity at UVM in Vermont put out what I assume was an internal poll with a question about who the respondent would rape if they could.  I just do not know what to say here.  Talk about way past acceptable.  Even in my most decadent sexual fantasy, rape has never come up.  Some midget strippers and a trampoline once, but never rape.

Apparently 30% of the Texans responding to a recent survey believe humans and dinosaurs co-existed.   Before I get all anti Texan here, I would like to know what percentage of the population even know what a dinosaur is.  And to be fair, from the IQs I have run into over the years in the many places I lived, I am guessing a sizable portion of this country's population would be inclined to believe Fred Flintstone really lived in Bedrock.

Proof or at least another item in the news that would lead one to believe that Texas is not the only state harboring people wearing serious blinders would be the concern over Evolution by the head of the Hart school district in Kentucky.  He contends that Evolution is being taught as fact in Kentucky.   It is not fact in Kentucky according to him.  Apparently he failed to notice that no where is it taught as fact, but as theory.  I guess he can't tell fact from fiction.

**Mitt Romney has inspired another American institution to step up and show their patriotism.  Apparently the KKK has adopted Romney's new slogan " Keep America American".  Mitt should be playing to his strengths instead of trying to capture the weak minded members of his party.  A talk with Perry before he came up with this one might have come up with a better one - "Keep Straight America, Straight American".  That would have at least brought a larger demographic into the tent of stupidity the GOP seems to be constructing of late.**

Image of Dinosaurman from  Objective Ministries - Apparently dinosaurs and Man coexisted peacefully with each other around 2000 BC.  I did not know that.   Upon further investigation however, there are those non-believers who think this site is a hoax.  I found Dr. Paley's arguments compelling.  I mean come on.  Any animal we "peacefully coexist" with seems to end up extinct or on our dinner table.  And I am guessing that herding dinosaurs must have been a lot tougher than oxen.  So it was probably the smart thing to do to hunt them to extinction rather than waste time trying to corral them.   Although the Objective ministries contend they died off during the Great Flood.  Guess we couldn't build a big enough boat for them.

So of course I looked up Noah's Ark.  There are differing opinions on how big it was, but a popular guess has it 450 feet long, 75 feet wide, and 45 feet high.   Wow, that's big.  They could have crammed in a few dinosaurs I think.

** After the fact correction - Not only did I misrepresent Mitt Romney and the KKK with this paragraph.  I now find out that the slogan was not adopted by the KKK from Romney, but he was accused of adopting it from them.  But according to the apology issued by MSNBC, the slogan has been used more than a few times by any number of groups.  Let me add my apology for getting it so wrong also.  I blew it.

Read the rest of the story here
Posted by MRMacrum at 5:47 PM

You know damn well that the dinosaurs died off long before we showed up. And I'm pretty sure that his damn boat is just a myth.

There's too much going on out there for us to keep up with it all, and I'm getting more and more to where I just don't give a shit.

Damn, I am disappointed that South Carolina was not mentioned. The ignorance we cultivate down here is like fine French wine.

Are you suggesting that Mr. Slate is a fictional character?

When I did a maternity leave substitution for a science teacher in Kentucky I was told that under no circumstance should I teach any subject connected with evolution - she also kept a Bible on her desk.
the Ol'Buzzard

So I guess it's safe to say that anyone graduating from Ky. college can not be a bio engineer.

It's amazing just how much sheer ignorance can be propagated in the information age.

now you see what I'm considered so smart in Texas....stupids..