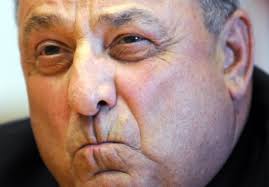 A memo regarding Governor Paul LePage's (Maine) upcoming budget proposal was conveniently leaked to the local media recently.  In it were some juicy tidbits about what our Governor wants to include in the budget he hands over to the Legislature to consider.

What's odd though, is the two proposals mentioned would seem to offset each other at best, and at worst, make it appear he has no interest in cutting costs, just re-distributing wealth, ........... again.

Based on his track record over the last 6 years or so, I would tend to believe the latter.

First, he wants to cut the state employee population by 1500 to 2300 people.  That amounts to about 20% of the people who work for the state.

Okay, here's the thing.  I am damn sick and tired of hearing about how tough it is to be rich in this country.  Waah, Waah, Waah.  "Trickle Down Economics" does not work.  We have had at least 30 years of efforts in various forms to prove the notion that if we leave the Rich with more money in their already bursting pockets, that their good fortune will "trickle down" to the rest of us.

Bullshit.  Over the last 30 years of feeling sorry for the Rich, I have watched their stacks of cash get fatter, while mine has gotten significantly slimmer.  And yet, they still whine about how unfair the tax code is.  They are right, the tax code is unfair, but not to them.  I would love to see their rate double, Hell, wouldn't break my heart if it tripled.

I do not understand how we allowed ourselves to be convinced we are somehow beholden to the Rich.  Without the sweat of our brow and the the pittance we get paid by them to buy their products, the Rich would be nothing.  They need us a whole lot more than we need them.  We should start pushing our agenda hard.  Get in their face.  Be unapologetic about insisting they ante up more to make this society a better one.  Their free ride should be over as soon as we can find the balls to insist on it. 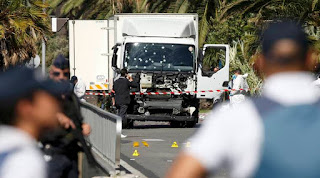 Moments of mass sadness have started to come back to back to back, hardly giving me the time to comfortably assimilate and deal with the sad event that came before.  As Nasreen Iqbal said in the comment section of my post about the Dallas shooting, it was not just a bad week in the US, it was a bad week in many parts of the planet.  Those bad weeks are coming one after the other.  The World is getting no break from the reports of deaths for no tangible reason other than to kill as many whoevers they can.

She is right of course. The planet seems locked into a negative rhythm these past 10 years, with each new year yielding an escalation of misery on a growing number of regional populations.  There are more displaced persons on the planet at this time than have ever been recorded before.  According to BBC News, there are up to 60 million people forced out of their homes and into the begrudging hands of countries ill equipped to handle the huge influx.

My mind cramps when I try to appreciate all the various reasons folks are forced from their homes.  My mind cramps when I try to understand reasons some groups have for killing people not directly involved in their struggle.  And the fact that the horror of mass deaths are now coming right on top of each other, I have come close to shutting down my empathy and going numb.

I just do not know what to say.  Words cannot convey the ache I feel for the senseless carnage one sick individual was able to create by simply driving into a crowd.  Helpless comes to mind.  Angry as Hell is right up front also.  What can an average citizen do to fight the assholes who want us dead? 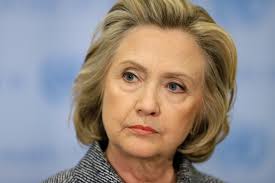 First I want to be clear I was a Bernie supporter until it became obvious he had no chance to secure the Democratic Party's nomination.  Hillary is my choice now.

The Old White Guy party, made up of both Democrats and Republicans, has proven over the last 15 years or so, that they will need to make room in those smoke filled rooms for minorities and women.  Their track record for running this country has been spotty at best, and in recent years, abysmal.

America drove home this point when it elected, not once but twice, a black man to be our president.  And I for one, feel Obama did a very good job, given the poisonous political atmosphere in which he had to operate.  The viral hatred aimed at him and his policies were like none I have ever witnessed in my six plus decades on the planet.

Americans are angry.  Right, Left, and in between.  The reasons vary, but the intensity of the country's displeasure with DC seems fairly evenly spread throughout our demographic groups, economic, social, religious.  Electing Obama and the formation of the Tea Party and it's subsequent effort to take over the GOP, are loud indications we want something different from our leaders.

So here we are facing another Presidential election.  Our choices are a woman with a long history of controversial public service and a snake oil salesman with absolutely no public service time in his record.

I understand we are pissed off.  But for me, there is only one logical choice.  Hillary may have her issues, but experience, domestically and internationally is not one of them.  She has shown backbone throughout her long public career and not backed down from making the difficult decisions that came her way.  To Trump's credit, he too has not backed down from making decisions, but it seems to me, his decisions were self serving with no room for the greater good of the business community he operated in.  He is and was a self serving blood sucking jerk.

The two choices we have in front of us are not ideal for any of us.  They rarely are.  And rather than throw out the baby with the bathwater by electing a totally inexperienced sleazy businessman,  maybe we should keep some political continuity with someone who knows their way around the various political pits on the globe.  This time let's elect a woman.

My experience with girls, women, the fair sex over the years has proven to me, they are generally more focused and can make the tough decisions better than men.  Physical domination sucks hind tit to mental toughness and focus every time.  Men throw their weight around, thump their chests, but when push comes to shove, they are more likely to cave or set their feet in the closest pile of clay they can find.  Men are more likely not to act.  Women make their minds up and go for it.

The Old White Guy's Party needs to relinquish their strangle hold on our Future.  It is time for a Woman's Touch. 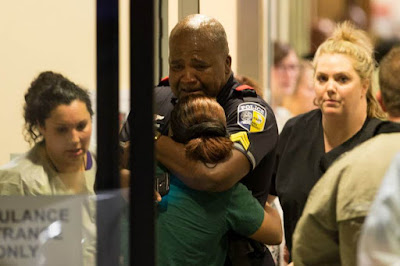 Two more black citizens lose their lives and the fermenting anger locked in our country's soul rises to the surface.  Protests nationwide, while physically peaceful, do not adequately relay the deep seeded fear and mistrust that divides White America from the rest.  Suddenly gun fire erupts in Dallas filling in the clueless White population how much anger and fear really exists in Black America.

Underestimating, or rather totally oblivious of the depth of despair and anger felt by the folks of other colors and ethnic origins, the comfortable White citizens are horrified when five of their own race and protectors of the common good are gunned down by sniper bullets.

"My God, what did they do to deserve being shot in the back?" Hands begin wringing, White anger builds and before anyone can get a handle on it, the powder keg is primed and ready to blow.

I witnessed first hand the violence, hate and discontent that gripped our nation back in the 1960's.  While playing a lacrosse game against St Alban's Prep in high school, the all white squads of both teams watched Washington DC burning.  The game went on even as it appeared the city was being destroyed.  White people were clueless then and apparently they still are.

I hate race card issues.  Matter of fact I hate that there is even a word like "race".  All our lives would be so much simpler if both sides could/would drop the term from our lexicon.  The fact that humans come in different hues is such a piss poor reason to hate each other.  Nobody's life is more important than another's.