Life is Not For Enduring 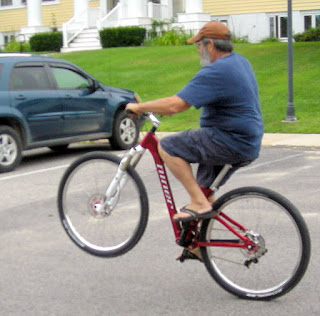 My previous post, I shared my recent mishaps on my new mountain bike.  From the comments I received, it appears I am not acting my age, or acting in a sane manner because I insist on riding past my skill set level.

JACKIESUE told me to "stay the fuck off the bike".

Mohaverat opined about how I will pay for my loose dog ways on a bike when I get older.

Maybe not every day, but often enough, a burned in image passes through the re/viewer in my brain.   An image of what I could become if I did not push every limit I have left.  I watched my mother give in to the accrued ravages of her life and basically become an invalid the last 10 years she was alive.   The arthritis she fought most of her life finally won and she became a hunchback old lady who stopped doing anything.  Too much pain to fight it, she said.

I have a similar situation rearing its ugly head myself.  And now that I am facing the same decade of life she gave up on, I use her shriveled up painful countenance to spur me to stay active even if it hurts.  And some days, just getting out of bed can be a struggle.  But then anyone who is 64 and up certainly knows what that is all about.

This past winter my weakened immune system let some heebie jeebie get a grip on me and I became another piece of furniture in the house for a month and a half.  Once I started to feel better, I worked up a new agreement with myself.  I was going to do what made me happy as long as I could.  Screw the pain or long term negatives that may result.  I only have so many bike rides left and I plan on pushing the ones I have left as far as I can.   I may not be fast anymore, but I can still test the edge of what abilities I have left.  Some pain I understand is a lot easier to deal with than the day to day chronic crap that fills up more of my waking time on this planet.

I still want to live Life, not just endure it.

Exercising My Own Right to be Stupid 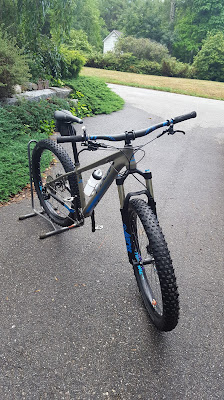 So I bought a new bicycle for myself a month or so ago.  This is not unusual.  I have owned and ridden too many bikes over the years to remember.  Owning a bike shop makes it easy.

This new bicycle is one of the latest hip mountain bike incarnations to be thought up in the design labs of the bike industry.  It is a Plus size mountain bike.  A 27.5 plus mountain bike.  It has fatter tires than traditional mountain bike sneaks.  There are many other differences, starting with the frame, but none as obvious as the tires.  What makes this bike so special is the phenomenal traction it has on the trail.  So far, I have failed it before it failed me.  It is indeed an awesome bike.  Fuji nailed it with this one.

But the bike is not why I am writing this post.  It is possibly related , but not the main thrust.

20 - 25 years ago when I was definitely nummer and dummer, I consistently pushed my off-road skill set past the sanity line.  One of our favorite lines was, "If you ain't bleedin, you ain't ridin hard enough".  As I was only gifted at birth with a normal range of athletic ability, when I began to ride mountain bikes, I began to crash on a regular basis.  While most were minor resulting in skunned knees, hips or shoulders, I did end up in the ER a few times.  A couple of concussions, a period of living with my first 8 vertebrae compacted, broken collar bone and stitches a couple of times.

After I broke my 5th helmet in less than 10 years, I decided that riding within my skill set was probably a good idea.  I had worn out any sympathy from my wife years ago and suddenly the dingers I was taking were taking twice as long to heal as they did when I was in my 30s.

I cranked it back a notch and began to come home relatively unscathed most rides.  Still had fun, and no dirty looks or sighs of disgust from my darling significant other.

That was roughly 1998 or so.  For closing in on 20 years, I have not stacked it hard enough to bring a doctor into my life.  No broken helmets anymore.

Enter my new bike.  The hot hip new steed that is currently one of the rages floating around the bike world.

My second or third ride, I stacked it hard, went over the bars and crushed my helmet on a rock.  Definitely rang my chime.  Lost some seconds or maybe a minute or so trying to remember what happened.  Went on self directed concussion protocol because I absolutely did not want my wife to find out.  Apparently, I was okay. I felt fine the next day after waking up 3 or 4 times in the middle of the night to check out my eyes.

The next week while trying to perform a tight turn I should not have, I crashed again.  This time my right forearm took it hard.  Immediate blood and ugly stuff drenched my gloves.  Dave had some duct tape and he taped it up so I could ride back to the shop.  From the hit I took, I knew it was probably stitches time.  I was right.  It took a total of 10 stitches to close me up - 3 in the deeper parts inside and 7 on the outside.

As I could not really hide this mishap from my wife, I decided to take the coward's way out and call her from the urgent care facility so I wouldn't have to face her evil glare.  Doing it over the phone did not help.  Her disgusted voice was even worse than the stare.

I blame the bike.  I blame the bike industry.  I blame anyone but myself.  If they had not invented such a fun bike to ride, I would not have been tempted to ride beyond my skill set like I used to.  But I will say that even though the bike is an evil ride, it is very much a fun evil ride and I will be riding the crap out of it as long as I am able. 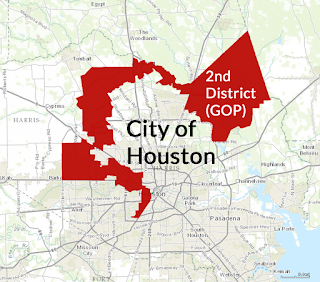 A post over to "Who Hijacked Our Country" about the recent court decisions regarding the new voter restriction laws got me to thinking about how rigged the whole election process is in this country.  The Democrats and the Republicans have tweaked and twisted the system over the years so that every election tilts in their direction.

While the "two party" system seems to work when both of them actually compromise with each other, the polarization of the last 20 plus years has this country's political process so knotted up, nothing is getting done.  It is entirely too easy for gridlock to happen when only two parties have the reins.  A viable third party would shake both trees and force policy movement that in the end could be considered progress.  Right now though, we are dead in the water and tempers are at an all time high.

But how to change the current political landscape to allow for the rise of other parties?   Hmm.

One thing that could be done is to create a national system that does not allow states and local areas to pass laws or redistrict based on arbitrary and often prejudicial criteria.  There should be a basic set of election rules every state and local area has to adhere to.  Elections are too important to allow locals to set them up as they please.

Included in this national election directive would be the outlawing of gerrymandering, the redesigning of congressional districts to favor one party over another.  The number of Representatives in the House could still be based on population, but they would be elected in state wide elections, not by specific districts.  This would instantly negate gerrymandering.

I know and hear the whining about how the less populous areas of a state would be ill served by Reps being elected in state wide votes.  Cry me a river.  The damage done to the elective process by gerrymandering over the years far outweighs the predicted and as of yet unproven lack of representation to folks in the more rural areas of a state.

Regardless, the design of congressional districts should be taken out of the hands of partisan state legislators.

What an Entertaining Election 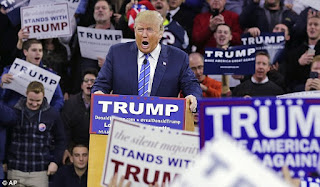 In the face of growing ridicule and disdain, The Donald and his merry band of Trumpeteers press on in their heroic quest to defeat the windmills of logic and reason.  A fine and brave army of Homers insist on defending their inalienable right to be stupid.

Meanwhile, in the age old smoke filled rooms of the Right, crusty old white men are just now realizing the import of what they were responsible for unleashing on an unsuspecting public.  Wisely, their counterparts, the aging Hippies of the Left are restraining themselves for the most part so as to allow the Right the room necessary to defeat itself.

Damn, Politics can be fun to watch.