Okay.  So I recently mentioned I was going to refrain from political posts as much as possible.  And I am planning on doing that.  Today's post is an indicator of what "as much as possible" means.  I made the rules here, I will manipulate them anyway I want.   So yeah, take that, Guilt Guy, who exists inside my brain cavity there in the back next to Mr Regret.

I long ago established that I am comfortable politically inhabiting the Left side of the aisle.  My range will change some, but I am more of a home body who likes to think of Home sitting next to the tracks on one side or the other.  And over the years I have consistently favored the Shack on the Left over the one on the Right.

I like knowing the Middle is usually where things end up.  Not getting sucked into the extreme claims of the folks who exist on either cliff side is a number one goal for myself.  I have learned to hear the wackos out, but never trust them.

Having been raised to be a Republican, my change of heart came after living through the 1950s, 1960s and 1970s.  America was finally realizing Life in the States was not some Leave it to Beaver TV script.  There was just too much wrong in the country and it seemed the Right was consistently on the wrong side of those wrongs.  Their politics were and still are to some degree an effort to resist the Future from taking over their perception of their Past.  The Left, on the other hand, seems destined to always be looking to take on the Future and screw the Past.  I liked that when I was 18 and I like it even more now.

The reason I feel looking forward and evolving is better than holding onto crumbs from the Past is, if we are constantly looking for ways to improve, there is a better chance of actually doing it than sitting on our hands and telling ourselves, "Life is Perfect".

We live in/on a world that has done only one thing consistently.  The one constant our world and we share is change.  Nothing stays static.  Nothing.  And it only makes sense we all work to meet and hopefully control that change as much as possible.  Looking to the Past as the Right seems determined to do only ensures we will get bushwhacked.

Email ThisBlogThis!Share to TwitterShare to FacebookShare to Pinterest
Labels: Politics, Pop Culture, Silent Conquest of Ourselves 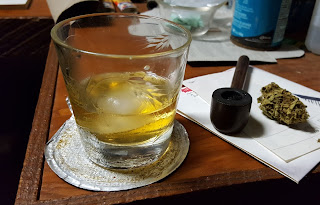 Many minutes ago my wife told me I had had enough whiskey, beer, and wine.  Not sure what gave me up.  I was not slurring my words, though I wanted to.  My eyes had not crossed yet, and my motor skills were still within acceptable limits.  Regardless, she knew more than I did and told me so.  So I stopped drinking with the exception of this last glass of wine to round out the evening's libations.

So she told me to stop drinking.  Okay dear, whatever you say.  I notice though you did not say anything about the doob, wondrous weed that has been part and parcel of my life since 1966, or was it 1964?  I cannot remember.

Regardless, I twisted up a couple of joints of Pineapple Kush like it was going to be possible to suck down both.  I sat back full of optimism but only managed two or three hits before I had to stop.  Damn good weed, that Kush is, Dude.  Especially on top of a couple of beers, six or seven shots of Scotch, and a couple glasses of very tasty red wine.  Feeling no pain comes to mind. 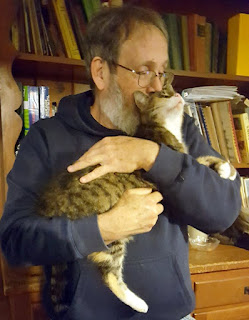 There is a good reason I decided to tie one on tonight.  Okay, yeah, so it may not be a good reason, but it is a reason.  Not like I needed a reason.  Been a couple of years since my last mini bender.

I had to put down Eyeleen earlier today.  She had her run. It was beyond sanity to try and keep her alive any longer.

Eyeleen was one of a multitude of kittens born in our closets we had loaned out to the Kennebunk Animal Shelter roughly 16 years ago.  She was one of the losers.  She had a bad eye and a bad attitude.  So we kept her cuz that's what we do here at Acton Up.

So here I am, hammered, stoned and missing a damn cat that was a tough cat to love.  She had some real bad habits.  But I could always get her to purr no matter what madness she had just been involved in.  I guess when a life shares 16 years of my life, I oughta pay them enough respect to at least toss back a toast or two.  Of course, I never could just toss a toast or two without following up with more toast tosses, often ending up with me on the floor under the dining room table, or incarcerated for the night. 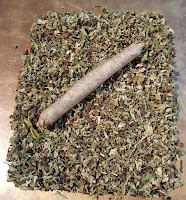 Damn, its been 41 years since I last saw the inside of a jail.  Pretty good run considering the dark predictions of my future behavior back in the day. Yeah, I grew up as the neighborhood "Bad Influence", bent on wrecking the fragile hold my peers had on Christian Morality.  I never felt like the bad influence, but I sucked it up and let the weight fall on my shoulders.  I knew the truth and so did those who broke those rules with me.

Someone had to be the chump.  I was perfect.  I wouldn't be around long anyway.  I never was.  A year here, a year there , growing up always the "New Kid".  The easy mark.  Its those new folks from away with their loose morals and Heathen ways.  That's right, I was born to be blamed for leading their good kids astray.

That was so long ago I am surprised those memories cut through the fog with such sharp edges. Though, in the long run, the experience was not an insignificant ordeal.  It left its mark on me.  Any pain I felt then long gone, fashioned now with fond memories and rose colored glasses.  And that's fine.  Remembering with a grin beats reliving a moment long gone with a tear in the eye. 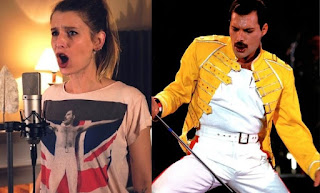 Recently I have been exposed to new and wonderful cover songs of the music I passed the last 66 years with.  So many covers, it is impossible for me to remember them all.  And here I thought Rock/Popmusic had turned to shit.  .........................  Okay, even back in the day, most of Rock/Pop Music was garbage.  No different than today I guess.

Regardless, the excellent cover tunes I have heard recently indicate the talent is out there, the bands just need the right tunes to shine.  The YouTube video below is by a Spanish Metal band - Ankor.  It is very good and does "Bohemian Rhapsody" Justice.