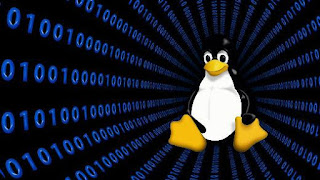 So Ray, of that wonderful Yooper couple, Ray and Nan, informed me he is currently trying out Linux instead of his old computer's original operating system.  I am jealous.   The first time I heard of Linux, I was enthralled.  Just figured it would be too tough for a lazy dumass like me to deal with.  And it may be.  We'll see.

It is not that Linux is free.  It is that rumor I have read that it is less likely to suck up viruses, malware, and streaming monsters.  Cheap and reliable in my opinion is the mark of a great tool.

So here I am on Day 1.  I have signed up.  I have read my first tutorial.  And now like I have actually accomplished something, I am bragging about having done nothing more than what amounts to stepping onto the treadmill and admired it without turning it on. 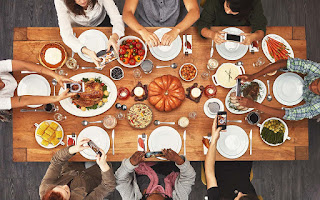 Google has begun to offer up answers to what I assume are the questions asked the most about the specific thing we wanted an answer about.  Four questions that often appear to have been picked out of the internet fog without thyme or reason.  I googled "Thanksgiving".  The first answered question was "What Thanksgiving really means?"  I was not interested in their answer.  I did not open the answer.  Each of us have to answer that for ourselves.

Have a sumptious gathering this day Y'all.
Posted by MRMacrum at 10:50 AM 1 comment: 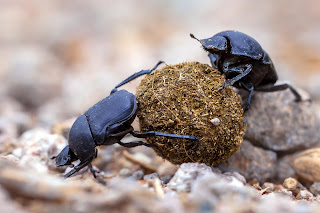 I guess it was when Moscow Meetch was the hot topic a few months back when I decided that he and Senator Lindsey reminded me of Dung Beetles.

An Ass like Trump needs a few guys with shovels and brooms to stay close to his backside to keep the streets free of the mountain of shit he spreads like so much confetti at a Johnny comes marching home parade.

I was reminded of this by Ray, my online Yooper buddy when he posted something on Facebook about Senator Lindsey and spirit animals.  Suddenly it all clicked.  The Right has become a population enthralled with anything related to shit.

Some of the shit is old shit brought back to use in false narratives and false comparisons.  And when the old shit is not doing it for them, they make up new shit.  Some of the shit they scoop up as it falls from Trump's butt.  And some, like Senators Lindsey and McConnell, roll Trump's shit into little balls to be savored later when they are alone.  Or maybe they are rolling it up to sell at a future date.  One can count on that I suppose, what with money and its possession being ahead of Country, God and the American Way on the Right side of the aisle.  And to be fair, the Left has its share of money first assholes also.

Sadly, my comparison to the noble Dung Beetle seems unfair.  No, it is unfair.  But there it is.  Life is not fair.  And from what I can tell, Dung Beetles do not care.  They only care how big a pile of shit they can roll into their Dung Beetle lairs.  Trump is a lucky man to have these two covering his backside.  Without them, if he turned around to walk back from where he came, he'd trip and possibly hurt himself as he fell face first into his own shit.

Keep up the good work.  Mitch and Graham, you guys rock.  Just take off your overalls and shoes before you come into my house. 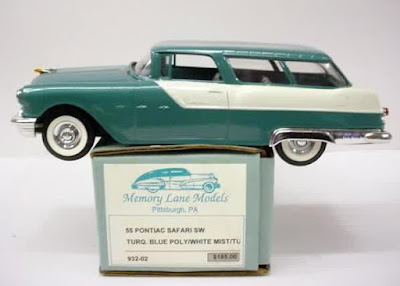 The green 1956 Pontiac station wagon was a beast. My mom insisted on a big V-8 and a three speed manual transmission on the column . She had to wait an extra 8 weeks to get it. In 1956, every car out of Detroit it seemed came with automatics. My mom would often take me with her to run errands, visit a friend, or just go for a ride. At age four and five, I didn't care why, I just wanted to ride in that car. It was big and it was the first car I remember.

I do not remember ever sitting in the front seat. The reason escapes me now sixty some years later. Was my back seat status voluntary or some parental rule laid down for my safety or their sanity? Whatever the reason, the back seat it seems is where all memories in that car come from.

Mom always made plans for our local trips. Dire warnings to come home clean so we could go here or there always preceded our journeys.  By age four I had definitely developed a keen ability to find and wear any dirt, grease or grass stains within a 10 yard radius of wherever I was at the time.  It is habit I have yet to break. Some trips were canceled in what I assume was retribution for failing to live up to the clean clothes directive. More than once I can remember watching sadly as the green Pontiac disappeared down the driveway going on some grand adventure without me. This never went over well with my brothers either. Me home but without a parent in the house meant I had to be cared for and any stupidity they had planned was ruined and it was my fault. They were after all, aging teenagers who had no interest in caring for a kid brother whose only use in Life was to complicate theirs.

In that station wagon I would sit on my knees so I could look out the side window, the front window, any window I wanted. Back then, seat belts were not on anyone's radar, least of all mine.  But threats of bodily harm from the front seat kept my most rabid activities to a minimum.   And yeah, I can remember well what it felt like to crash face first into the back of the front seat as  Mom avoided a variety of collision catastrophes.

Watching the world zip by at fifty miles an hour just seemed so cool. When it was warm, I would hang my arm out with my hand flat and pretend to be a jet airplane. I would move my arm like a snake and feel the wind pressure change against my hand and arm. I would gaze into the woods and fields daydreaming about being a cowboy on the trail herding cattle, fighting rustlers, or being the Lone Ranger and saving Ole Lady Grigsby's  ranch from the evil land agent and his gang of pony ridin cut throats.

At age four through age eight or nine, the world beyond my house and yard was a wonderful mystery to me.  In the Green Pontiac, some of those mysteries were resolved, while many more teased me from around the next corner or over that horizon.  That 1956 green Pontiac station wagon was my first grand introduction to the wide world waiting for me to make a mess of.

Yeah, I loved that car. 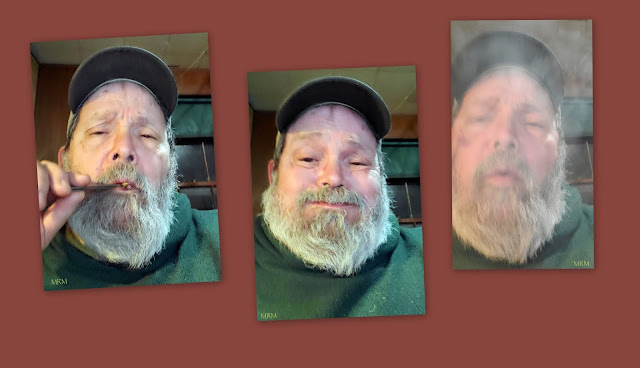 I have been awake since 2:30 AM.   Not whinin nor braggin, just letting anyone interested know that I enjoyed a good wake n bake just as the Sun poked its lil head up in the East. I had 3 1/2 hours to think about the pros and cons.  I decided the pros outranked the cons.  Attitude adjustments should always be on the table.  Retirement definitely has its perks.

I have been waffling of late over which stellar Democratic candidate I would like to see in the White House instead of Putin's Bitch.  There are so many choices, it is hard for me to nail down one contender who makes me wet like Obama did.   In 2016, Hillary certainly did not make me swoon. But I voted for her because, well, I knew we would be in a world of hurt should The Donald take the helm.  As it turns out he is actually worse than any nightmare scenario I came up with prior to his election.  But I am getting off track ..........

So here I am trying to whittle the Democratic field of candidates down to a more manageable number, say down to two or three with Good ole Joe Biden as the default.  The prime objective for the 2020 election for me is to replace Trump and as many Republicans as possible.  They are nothing now but a gang of chimpanzees hatefully flinging their shit around.  Any notion of legislating and leading from the Right has disappeared completely.  In its place is the new-ish GOP doctrine of just say No, while whining like spoiled little brats.

I decided Mayor Pete was my current favorite after earmarking him six or so months ago as someone to watch..  There was and is no second place yet, but there is always Joe.  Good Ole Reliable Joe Biden had my back.  He would bring some class and ethics back to the Executive Branch.

Hmm........... A couple of months ago I noticed Joe didn't seem to have much spark.  Sure he was and is reliable and way more capable than the current POTUS.  But I was not as enthralled as I had been.  And then just, what, last week or so ago, he said in a speech that he would not support legalizing Pot because he was pretty sure it was a gateway drug.  Just "Pretty Sure Joe?

Good Ole reliable Joe Biden is now not even on my list.  He finally blew it for me.  Never mind that the whole "gateway drug" scenario is Bullshit anyway, his behind the times stance on almost anything keeps him from even entertaining the least progressive currents now gaining momentum on the Left.  It is time for Democrats to stop being afraid of the Right.

As the Right careens headlong towards its lunatic fringes, the Left should step off the fence and counter the Right by embracing more of the basic liberalism the Left used to stand for. 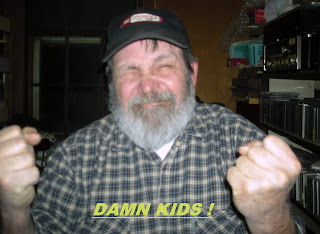 So, I just finished stomping on some Millennial's sensitive parts.  Didn't mean to, just voicing my opinion.  Matter of fact, I just now received a Facebook icon in the corner of my computer screen telling me he replied again.  Damn kid is wearing me out.

So anyway, today's encounter with the harsh judgement of another combined with my post yesterday on FB regarding my White Privilege and suddenly I found something to blog about.

It is very rare for me to even take note of pissing anyone off on the intertubes.  But the total breakdown of communication between myself and this young man brought the differences between generations into stark contrast.  It was when he started out one comment, "OK Boomer', that I realized what we had here was someone with a generational ax to grind.

I tried not to get sucked into the generational thing.  And upon reviewing my responses, other than calling him "Junior" once, I did a fair job of staying with my point.  In fairness, he did also.  But he had laid the foundation of a Boomer facing that which they had a part in creating.  And he exuded an attitude of resenting me for it.

What it appears we both did was steadfastly decide to not understand each other.  And that's okay, its what generations do to each other.