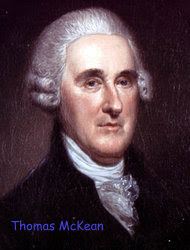 First of all I would have rather been related to John Roberts, the pirate.  And I guess it is possible there is a connection.  He came from Wales and my family on that side came from Wales at the same time he was an up and coming Pirate of fame and ill repute.  Apparently there were too many Roberts in Wales.  It must have been damn confusing.

Instead of the pirate I have to settle for having a traitor to the Revolution in my past.  Hardly as romantic as being related to a pirate who dies with his sword in hand and veins in his teeth.  But then my relative was hanged*. That's kinda cool.  It is also very cool that according to one historian, Williard Sterne Randall, it was the trial of John Roberts that caused Benedict Arnold to go public with his opposition to the radical Whigs and their lust to go after Tories.  Had he not publicly supported clemency for the Loyalists, his name may never have been inextricably entwined with the word "traitor".

They say History is the final judge of an event, a person's legacy, of anything that happened too long ago for any live witnesses to corroborate or deny.   I think that is bullshit.  I have now read many articles and treatments of this first trial of treason by Americans of  the Revolutionary War.  Each one seems objective and uses  the same facts from the public record, but they come up with differing conclusions.  How is that the final judgement?

It is not.  It just reinforces my contention that history is up to the eye of the beholder.  So in fairness to whoever might consider being fair a noble endeavor, I offer a slightly different twist on my namesake John Roberts lll.

Once I found the first couple of historical perspectives on my relative John Roberts lll, I felt that there was enough evidence to suggest he had been treated unfairly.  I still think he was, but now I wonder if he might not have asked for what happened to him.

I already gave you the background in the post, "The Traitor".  John Roberts lll was a successful miller and landowner in pre-Revolutionary Pennsylvania.  He was a Quaker so he would not take sides in the unpleasantness that made up the Revolution.  He was hanged* as a traitor.  My first version has him an unwilling ally of the British.  According to the new information, true or not, he did indeed throw his hat in with the British.  A calculating man, he went with the group he saw coming out on top.

The events and circumstances of the Revolution were not the simple tale we were forced to memorize as children.  No war is ever that simple.  The only indisputable things of a war are the physical events that happened.  The reasons and repercussions are a matter of opinion by those who interpret the events after the fact.

To really begin to understand the possible reasons of why my great, great, great grandfather was hanged*, I needed to look into the politics of the time.

The revolution did not enjoy universal support from the colonists.  The support varied depending on which colony and which area one might visit.  Unlike the leaders in Massachusetts and Virginia who had secured political control of their colonies early on, Pennsylvania was a different story.  Leading up to the Revolution the Penn political party enjoyed political control.  Being mostly Quakers and very wealthy, they were not so quick to embrace the Revolutionaries.  Ben Franklin, also a Quaker, was the only leader from their party who jumped on the rebellion bandwagon.  He worked tirelessly to usurp their strangle hold on Pennsylvania.

The lack of support for the Revolution in Pennsylvania caused the Whig radicals to import help from outside to bring the Keystone State in line with the goals of the Rebellion.  Once these out of state thugs had control of Pennsylvania, they were ruthless.  Initially, there was no representative governing body, just a council that issued edicts and then proceeded to act on them.  Loyalists were gathered up, their properties confiscated, and many were jailed.

More than one rendition of what Roberts did and did not do to deserve being the first traitor legally hanged* agrees he was a willing ally of the British.  He was indeed a volunteer who made money off the British supplying them with food, clothing, almost anything but the weapons of war.  I could argue that he was certainly not the only colonist to do so.  The Rebellion hardly enjoyed unanimous support.  But the fact is he was singled out and hanged* for a variety of reasons.  Consolidating political power.  Initiating the rule of law in what could only be described as a land devoid of law at the time.  And I would guess that his wealth was coveted and dispersing it among the relatively poor Whigs was but another spoil of war.  Add into this, his Quaker religion, and it makes sense the mostly Presbyterian Whigs found themselves justified to take what they wanted.

So it seems that no matter what is put down as the final judgement of a man, the story is never complete with all the pertinent facts and forces that cause a man to hang by the neck until dead.  John Roberts also helped American prisoners while he was in Philadelphia, providing food and blankets and moral support.  He turned himself in after the British left Philadelphia without having to be hunted down.  He thought his actions were just.  Many people of influence thought he was being railroaded.  Even Judge Thomas McKean, who presided over his trial sought clemency.   Only 2 of the 12 jurors found him guilty the first round.  Only upon being told that clemency would be sought by the court, did they change their verdict.  All for naught.  The Whig thugs in charge needed an example to restore order and create fear in standing against the new republic.  They hanged* him and confiscated his property.  It was only 4 years later once the dust settled, the State of Pennsylvania  tried to atone for its sins by giving back to his widow some of the vast property Roberts had accumulated over the years.


"You will probably have but a short time to live. Before you launch into eternity, it be¬hooves you to improve the time that may be allowed you in this world: it behooves you most seriously to reflect upon your past conduct; to repent of your evil deeds; to be incessant in prayers to the great and merciful God to forgive your manifold transgressions and sins; to teach you to rely upon the merit and passion of a dear Redeemer, and thereby to avoid those regions of sorrow – those doleful shades where peace and rest can never dwell, where even hope cannot enter. It behooves you to seek the [fellowship], advice, and prayers of pious and good men; to be [persistent] at the Throne of Grace, and to learn the way that leadeth to happiness. May you, reflecting upon these things, and pursuing the will of the great Father of light and life, be received into [the] company and society of angels and archangels and the spirits of just men made perfect; and may you be qualified to enter into the joys of Heaven – joys unspeakable and full of glory!"

So see.  Nothing historical is as it seems two plus centuries later.  Nor is it so clear as to be straight forward when it is happening.. Always question the "official line".  Many times, it is not how it went down.

* Edit on the proper use of "hung" and "hanged" - courtesy of one of the Pig Brothers.
Posted by MRMacrum at 7:34 PM

Email ThisBlogThis!Share to TwitterShare to FacebookShare to Pinterest
Labels: Dredged from the Past, Family, Genealogical, Politics, Religion, The Traitor

I have to tell you how much I am enjoying your journeys into the past. The combined family heritage and American history tales are extremely interesting and skillfully composed.

I've done a fair bit of research into my family history, but haven't found anyone as infamous or noteworthy as John Roberts.

One bit of nitpicking, if you don't mind:

A portrait is hung. A condemned man is hanged.

El Cerdo Ignatius - Nit picking noted. I have always gotten hung up on which way to go when hanging or being hung. You sound like my Junior year in high school English teacher. He was always polite also, but demanded I get it right.

I have just caught up on my reading of your blog posts. You have been busy. Love the family history and your commentary on the Revolution. History is indeed in the eye of the beholder (or beer holder) as is beauty. Which is why there are always room for more histories to be researched and written. There is no definitive absolute.
Americans seem to have been no more tolerant of contrary opinions then as now.

this is really very very interesting..

I have to agree, history is not the final judge. It's too subjective. It's no more final or objective than a current news story being reported on by Fox News or MSNBC.

My favorite history book is Lies My Teacher Told Me. I'm not saying it's better or more accurate than the standard high school history text, but it's different; and a lot more thorough.