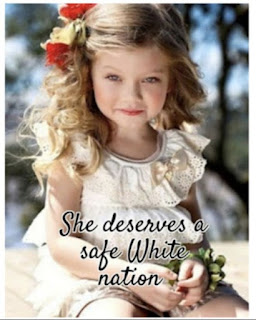 Not sure why this image bothers me so much.  Is it a specific button it punches?  Or is it just the overall disgust I feel when I view it.  So many flash points here, it is tough for me to sort them out.  Regardless, as a white man living in this country, I feel ashamed that idiots of my race insist on restricting their lives and their children's lives to an existence defined by a black or white code.  I guess my main takeaway is that this image hardly helps in making our nation safer.  If anything, it adds to the instability, insecurity, and ingrained prejudices that have always divided us.

My early military brat years were spent in the protective bubble of a desegregated military world.  I am sure there was racism, but nothing a child of 5 or 6 would notice.  At that age, our experiences come from the Big Picture, not the underlying subtleties of the Real World.

It was in the early 1960's after my father retired from the Air Force and we moved to Tallahassee, Florida that I was rudely brought into the Real World.  I learned Life has a dark ugly side to offset the bright sunny side folks hold near and dear to their hearts.

1963 Tallahassee was a typical segregated southern city of whites and blacks kept apart wherever possible.  I witnessed White on Black violence behind the turned backs of White cops during civil rights marches.  I felt the intense hatred from a crowd in a Black only movie theater I mistakenly walked into.  It was a serious coming of age period.  My education only continued as I grew up in other areas while watching my country transition from Jim Crow to something else.

That "Something Else" was no longer the overt world of Jim Crow and weekly Klan meetings advertised in local gazettes.  Racism had dropped below the Sunny Side's radar where it has been festering for 45-50 years now.  It took Trump to kick the hidden racism into brighter lights with his program of enabling hateful tweets, speeches and rallies.  I guess we should be grateful to Trump for slapping our country with this dose of Reality.  There are Evils out there that will never be conquered.  They will only be beaten back.  And to fall back into a satisfied complacency that the Evil is defeated is just giving  it time to lick its wounds so it can come back stronger and uglier the next time.

Image from "From Open White Supremacy to Stealth"

Email ThisBlogThis!Share to TwitterShare to FacebookShare to Pinterest
Labels: Dredged from the Past, Events that turned me into a Progressive, Pain, Politics, Pop Culture, Sanity, Silent Conquest of Ourselves, Smokin Roaches Monday
Newer Posts Older Posts Home
Subscribe to: Posts (Atom)