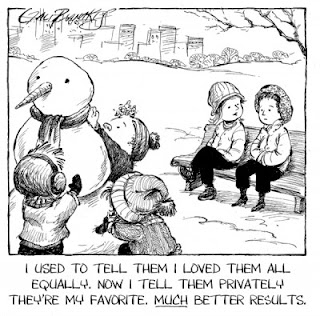 Saw a news piece last night about a radio talk show host out west somewhere who admitted on his blog that his oldest son was his favorite.  Parents with tight sphincters across the land drew in sharp breaths and fired off nasty comments in his direction.  I guess it is okay to have a favorite kid, just do not under any circumstances let people outside the immediate family know.

Come on people.  Jeezum.  Every family with more than one kid has the "he's/she's your favorite" crap well entrenched into the family dynamic.  My oldest brother was my mother's favorite.  She would try to disavow it, but the years of accumulated incidents and situations told a different story.

Being at least of average intelligence, once I figured out how to use my mom's favoritism for my oldest brother to my advantage, I was okay with it.  I figured out that included in the Mom Package that comes with pregnancy, a huge amount of untapped guilt is included.  And since I was the average weasly little brother, I would dip into that guilt whenever it suited my twisted little mind.  Parental overcompensation can be a wonderful thing when one wants to go to the movies or score those new high top Chuck Taylors that were silently screaming my name over to Brooks Sports Shop.

Of course it never worked on Dad.  My dad was the traditional old school dad.  He seemed to have little regard for any of us until we showed some smarts.  That is the impression he gave anyway.  All I remember hearing from him my first 15 years on this planet was, "When are you going to smarten up?"   Eventually he either decided I had indeed smartened up or he just gave up worrying about it and accepted me for the idiot I was.  We got along great once I hit my 20s.  Well, there was the drug bust and bailing me out of jail thing, but oddly he never said a harsh word.  Weird.

So after this news piece was over I asked my wife, "Did your mom have a favorite?"

She looked thoughtful for a second and said, "Well, Nancy was my dad's favorite.  It was hard to tell with Mom.  If she had a favorite, she hid it well................It was odd though.  After the 6 year marriage to Bob (her first husband)was over, she did tell me she had never liked him."

She let me twist in the wind wondering whether Grannie liked me or not.  Grannie was everyone's favorite.  One of those blessed people that seem to be friends with anyone she meets.  The consummate grandmother.  She cooked, cleaned and held a family together with sheer will while her husband drank away his paycheck.  I desperately wanted to know she liked me.  Because I came to love her.

The timer dinged, the tuna melts came out of the oven and we sat down to dinner. 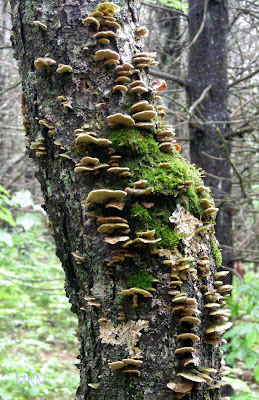 Getting back into the Blogger gig has been a difficult process.  During my hiatus these past few months, the meager skill set I brought to the effort of writing has not followed me back.  When once not too long ago I could write about anything, I now scan the horizon hard for even one tidbit or kernel to expand upon.  It was much easier to express myself last March than it is here in mid September.  Even brain muscles atrophy if allowed to sit on the bench too long I guess.

My wife, myself and Stubeechka, the three-legged wonder dog, have taken up walking every morning over to Mary's Park across the road from our dooryard.  Stubeechka was recuperating from cancer surgery, my wife was trying to find muscles gone missing for several years, and me, well I was just along for the company.

When we started back in mid July, our pace was just barely faster than stopped.  My wife could not complete the 1/2 mile loop without stopping to catch her breath.  Being numb-er than a hammer, Stubby would dash back and forth.  She was so weak she would collapse after one loop like she had been runnin deer all day.  Now over 50 walks later, my wife moves at a good clip and even after two laps , she's barely breathing hard.  Stubby is back to her old self - bouncing around and happy as if she had a brain.

Besides the obvious health benefits of at least bringing some tone to the muscles, what really matters is we are hooked.  My wife is already agonizing over where we will walk once the expected blanket of snow covers up the trails.  For that matter so am I.  Stubby, well, I am sure she is not contemplating what is going to happen in the next five minutes, never mind what might be going on two months down the road.  Regardless, I am sure she will miss our walks over to Mary's Park.

Minimal conversation passed between my wife and I those first few walks.  The only sounds, two geezers wheezing and the occasional twig snapping to pass the time.  Once our bodies had worked through the trauma of switching from Off mode to On, we might actually talk.  This morning my wife said, "When I started this walking thing I had hopes of losing weight."

I grunted in a way that told her I was listening but if the conversation was going to continue, she had to provide a follow up.

"But ya know, I feel way better and that's more important than the weight."

To which I replied, "Uh Huh."  Some silence followed and then I said, "Yeah, I lost another ten pounds this summer, but seemed to have plateaued again.  But yeah, I feel way better also.  Guess I need to ride more if I want to lose any more."

Me, well, I could scrape together some more time to exercise, but my wife definitely would have to search harder.  That woman puts in 16 hours a day for her accounting business.  Hardest working person I know.

This conversation stuck with me.  I considered the annual punishment I put myself through every Spring to aquaint my body with the notion of exercise.  Losing the winter layers runs a distant second to dealing with the discomfort of kicking aging muscles and bones back into gear.  But every Spring I remember my mother and how she caved and gave up.  That becomes my stimulus to push through the pain.  By May, I am usually very pleased I did it one more time.

While I sometimes regret not pushing harder, I realize that at least I am still pushing and I can live with that.

Life As It Should Be 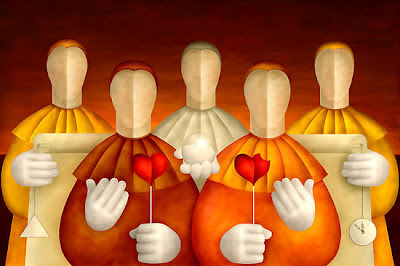 We can rant and rave about our situation, their situation, or situations not even on our horizon.  But wishing it so, wishing it wasn't, and wishing upon a star does nothing to void the reality that each and everyone of us wakes up to everyday.

Because it seems none of us are entirely at peace with our stations in Life, we form clubs, organizations, and gangs to protect what we have or to take what they have.  As if having what they have will somehow make us like ourselves more.  The group dynamic more often than not just increases the envy, disdain and fear others have for us and can become what we feed on.  I have found any substantial changes in my own reality are not the result of group efforts, but results of my own efforts and the luck of the draw.  Group Hope often sets us up for Group Disappointment.  And Group Fear more often than not is self fulfilling.

Until we can steer our self interest in the same general direction, the hate, discontent and disconnect many of us harbor will continue to result in what we have.

Not sure where that came from.  Guess I should not have watched the news yesterday.

Email ThisBlogThis!Share to TwitterShare to FacebookShare to Pinterest
Labels: Personal, Silent Conquest of Ourselves 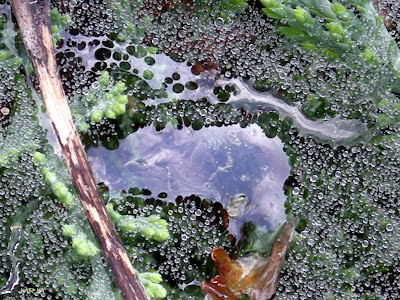 My eyes popped open at 4:00 AM.  As I had crawled into the sack at 9:00 PM  last night, I did not feel cheated or sleep deprived..  Six or more hours of sleep lately is not just a bonus, it often feels like a guilty pleasure.  I frequently harbor pangs of guilt I may have over slept.  Of course waking up at dark thirty in the AM can blunt those pangs and leave me floundering to find something to do until the Sun pops up in a couple of hours..

Brewed some coffee.  Puttered here, poked around there until the aroma of fresh coffee drew me back to the kitchen.  Full cup in hand, I contemplated what to do next.  Every project or chore I thought of meant making noise or depended on the light of day to seriously take it on.  There was always the Tube.  The Tube would fill the time until I could think of something.....Hmm .....Nah.  Fuckin TV doesn't just waste time, it wastes minds without the buzz one comes to expect when ingesting stupefying substances.

Now that I am here, I wonder what I should write about.  I told myself I was not going to launch into some rant about the stupid human events that make up the background noise of my existence.  Besides unfolding far away from me and my door yard, the multitude of idiots out there who put their madness into play on the Global stage will follow through no matter what I say.  Humans talk about striving for perfection and happiness.  Their actions all too often  indicate a large portion of us are intent on being unhappy and well short of perfect. 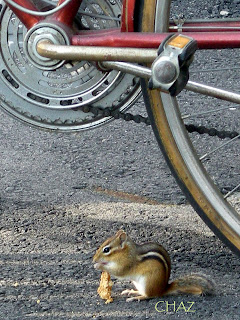 Chaz has been around for a couple of years at least.  It was only recently he began to swing through my bike shop whenever the doors were propped open.  The little leech has suckered me into supplying him with sweet morsels torn off high end energy bars.  Or he scarfs up the occasional M&M dropped under the candy dispenser near the front door.

A strictly commercial relationship, I supply CHAZ with tasty tidbits and CHAZ makes me smile.