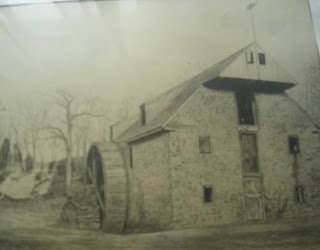 Rummaging around my ancestral past has gotten very interesting.

My middle name will now be a constant reminder of my relationship to a traitor in my past.  My middle name will also  remind me that Life is not fair, it never has been, nor will it ever be.....fair.   Life is a crap shoot and no matter how covered we think our bases are, events can combine to ruin anyone's day.

Of course like so many tales from 235 years ago, the truth or facts are often muddled as they  pass down from one family member to another.  But the facts of this story are indisputable. Only the reasons are muddled and mysterious.  It is a fact  that 3 signers of the Declaration of Independence tried to get his death sentence commuted.  And some years after he was hanged until dead, his wife had what property that had not been sold or redistributed returned to her and she was provided with a small pension courtesy of the Commonwealth of Pennsylvania.  I assume this was the government's way of saying, "Oops, we screwed up.  Sorry about that."

This part of my journey into the family past began with the picture above.  It is photograph of a pen & ink drawing one of my forebears, Charles Hamlet Roberts drew of the Roberts Mill near Philadelphia.  He drew it at age 17.  Kid had some talent. 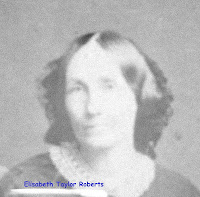 I grew up with this picture hanging prominently in whatever house we lived in.  It now hangs in mine.  Hanging on each side of it are photos of my  Great Grandfather Spencer Roberts and my Great Grandmother Elisabeth Taylor Roberts.  From what I can gather, Spencer might be the traitor's grandson.  I have not been able to fill in the void of about 60 years between Spencer and the traitor.  But Spencer ran the Mill, a strong indication of direct lineage.

In yesterday's post, I mentioned that one set of ancestors, the Spencers, had set up shop in America in the mid 1600's.  The Roberts also settled here in the 1600s.  1682 or 83 to narrow it down.  John Roberts left Wales and acquired a sizable piece of land directly from William Penn who essentially owned Pennsylvania at the time.  Penn was a well to do Englishman and a Quaker.  He envisioned creating a Quaker paradise out of the sight and mind of the intolerant attitudes and laws of England.   Religious freedom it seems is what brought the Roberts to this country.  Making money was what brought the Spencers.  Regardless, both  considered America as their way to a better life. 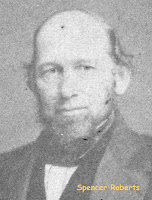 John Roberts built the second grist mill  to be erected in Pennsylvania.  Once he had it running, he built a solid business through hard work at the mill and farming his rather large land holding.  He had one son, John Roberts ll who took over when he died.  John the Second was not a healthy man.  Less than a year after he married, he died.  Four months later John Roberts lll was born

John Roberts lll was the prosperous one..  Under his stewardship, the family business blossomed.  He acquired more land, more mills, farmed more land, ground more grain, milled more lumber, and the Roberts became one of the wealthiest families in Pennsylvania at that time.  Naturally success like that created frictions with neighbors, competitors, and any number of people who would covet what John lll had built.  Add in the fact that he was a Quaker and it follows that he might have made enemies.

During this time of business expansion, the Colonists were becoming more dissatisfied with what many considered the overbearing control of the King of England.  They revolted.  Everyone knows or should have an inkling about this war.  If not, then go back to school ferchrisakes.  Many of the Quakers tried to stay out of the fray as a main tenet of their religion was refusal to participate in war..  They were anti-slavery, did not believe in drinking alcohol, and swearing oaths was out of the question.

John lll was fed up with marauding British and Colonial armies sweeping through his area and taking what they wanted.  I am guessing being a businessman, he figured they ought to pay for what they took.  So he heads to British controlled Philadelphia and petitions the commander there to ante up or stop taking his shit.  He was pressed into service by the British and forced to guide some of their patrols as they went on foraging missions.  He did not volunteer and was released from their custody when the British left Philadelphia.

The British finally surrendered at Yorktown, went home to England leaving a mess behind for the Colonists to make sense of.  The tumultuous period right after the Revolutionary War was full of sleaze bags among the new Americans taking advantage of their own.  John Roberts was accused of being a Tory by a man he had had a land dispute with.  He was arrested in a sweep that rounded up over a hundred people.  Only he and one other man were actually held for trial.  I am not sure about the other guy, but my namesake was hanged on November 4, 1788.  Hanged even though almost a thousand people had signed clemency petitions including American military officers and three signers of the Declaration of Independence.

Immediately after he died, much of his confiscated land and properties were sold secretly to several of his "competitors" from the same area.  Eventually some of it was returned to his widow  in 1792 along with a small pension to help carry her through to her death.

And this is what I learned yesterday about my family in between  bike tune ups and phone calls on a typical off season Saturday screwing the pooch.  The Internet is really a great tool for a fool like me.

Email ThisBlogThis!Share to TwitterShare to FacebookShare to Pinterest
Labels: Dredged from the Past, Family, Genealogical, Politics, Religion, The Traitor

I don't care about my ancestry, I don't think a lot of the information collected would be that accurate anyway. My ancestors were known for screwing any willing (and sometimes unwilling) person they could and then hiding that fact.

I dare say that we come from a long line of white trash. :-)

So that's where you get your America-hating from! But you've uncovered some cool stories, hopefully you'll find more.

Colorful family history, and an interesting glimpse into the underbelly of early America. A lot more interesting than the sterile history we get from textbooks.

This sort of reminded me of Johnny Tremain, a novel that took place in New England (or what would become New England) during the Revolutionary War. It was a reading assignment for 8th grade English class, but in spite of that it was a good read.

BBC - I did not have much interest in mine either until recently. And I am not sure why. I have always been into history.

Randal - I imagine I would have been A Quaker back in the day but for two reasons. The not drinking thing would have been tough to handle and I just have a problem with joining groups of any kind, even groups who refuse to swear oaths or tip their hat to any man.

YELLOWDOG GRANNY - I would guess all of us have interesting ancestors and sadness well distributed throughout the previous centuries.

Tom Harper - I remember Johnny Tremain. I would guess if I were to read it today, I would have a different opinion of Tremain and his Whigs.