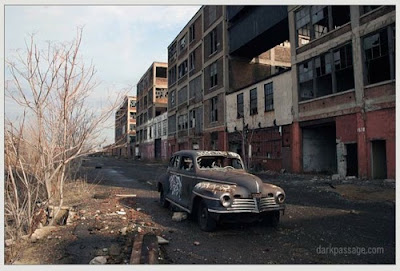 I ran across the video below over to Reality Zone.  It is a report on the current state of affairs in Motown.  What struck me while viewing it was not the financial trouble Detroit is having.  That has been an ongoing problem for like forever.  It was the video itself.

The news voice, a pleasant sounding woman with a Brit accent, tells us the population back in the hey day of American dominance in the auto industry was around two million.  Factories churned out cars, mills baked and bent metal, and Detroit existed happily as a show piece of American economic power.

Now the population of Detroit hovers around 700,000 and is close to being declared DOA.  The video is shot as the current residents go about their day.  There are moments in the city council room.  There are moments at the bus stops, there are shots of pedestrians on the streets.

Maybe I missed it, but I saw absolutely no white people.............until a snippet was inserted of the recent Dodge commercial exalting some high end cruising gas eater.  Who is behind the wheel of this over priced petroleum guzzling machine as it winds through the byways and highways of Detroit?  Yeah, that's right, a white guy looking all cool and hip with his hand draped at the wrist over the top of the steering wheel.

The white people have left Detroit.  That says more about where this country is headed than anything else I can think of.  Those who could leave have left.  Those who can't leave are stuck with the mess left behind.

And to add insult to injury, this video was put together  by al jazeera.  So this image of an America in decline is being downloaded, uploaded, reloaded throughout the Muslim world.  Not the image we want to project when we visit their part of the planet with our guns, tanks, and ammo.  The smart ones in our enemy camps know that all they have to do is wait and we will burn ourselves to the ground.  Can anyone say Ho Chi Minh?

Top image from Dark Passage
Posted by MRMacrum at 10:37 PM

Email ThisBlogThis!Share to TwitterShare to FacebookShare to Pinterest
Labels: Politics, Silent Conquest of Ourselves

Like anyone's gonna trust a bunch of ay-rab proper gander.

I'd wager that unfettered capitalist hedonism ain't so funny when you ain't the one unfettering.

You get a bonus point for the title because it made me think of one of the finest comedies of all time.

Hang out with the Walking Man (http://themanwhowalksalonewalksfaster.blogspot.com/) a while and you will see that the video is pretty well on the mark.

As to where the white people are, it's easy to get racist about this, but the truth is, there have always be ghettos and probably always will be. The only thing that changes are the inhabitants. Whoever happens to be on the bottom at any given point in history I guess.

I used to visit the Al Jazeera web site often for a different point of view. Now, it's just another corporate newscast.

A lady that visits my blog loves Detroit, go figure. There was signs of it going to hell when I was there 20 years ago.

Things are not great out here but all in all they are not all that bad either, but if the city keeps fucking up that may change.

Hahaha, at where are the white women at?

Not that I can get along with many of them. Maybe I should have stuck with my first wife, she was a injun.

Your post title reminded me of Blazing Saddles: "Yo, where da white women at?"

One possible upside for Detroit: I've read that housing prices are so low there, some people are moving in. Single family homes for $20,000 I think is the median price. And there's a small city outside of Pittsburgh where the median home price is something like $6,000, and this is causing this town to be revitalized. I forget the name of the town; it was written up in Rolling Stone a couple years ago.

This was from 2 years ago.
I doubt much has changed since.

I figure the white people of Detroit are a universe away hanging out in the suburbs convinced at the utter and complete awesomeness of all things American.

I've written about it in a few of my stories, if the shit ever hits the fan in this country and the Walmart shelves ever go empty forcing those in the inner city to search for food the resulting blood bath will make the shit in Iraq, Bosnia, and Chechnya look like a festival of love.