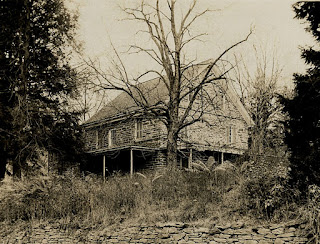 A man of means and importance dies unjustly and what happens?  Legends begin, lies become facts, and things start bumping around in the night.

Many ghost stories we read about are the creations of writers who wish to entertain us through fictional renderings of the terrors we all think up from time to time. But many ghost stories are born from factual events.

Such is the case of a Great great great great , not sure how many greats - Grandfather of mine.  He was legally hanged on trumped up charges in 1788 and not long after locals began to claim his ghost still wandered the family home he had built.  It is a real house that once had a husband, a wife and 12 children pass in and out on a daily basis. Eventually though, the saga of John Roberts lll overwhelmed it's reality and it joined the ranks of local legend in Lower Merion, Pennsylvania, a suburb of Philadelphia.

Naturally a well built house such as this one was not going to sit empty.  Many families lived there over the years.  I am hoping to find out if any relatives other than John lll lived there. 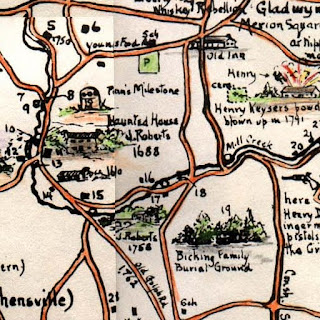 Every so often another tidbit is added to the legend.

~ Things in the house rearrange themselves overnight.

~ A man passing by supposedly heard a voice say, "This house is haunted".
OR - He wrote this as he approached the house, "Its Haunted they say."

~ Workers fixing something in the attic claimed to have felt an icy breeze envelope them and it was not winter outside.

~ Some residents have claimed to hear footsteps from time to time.

Of course no legend or ghost story would be complete without flat out fabrications like:

~ John Roberts was hanged in front of his house by an angry mob and buried beneath the hanging tree.

~ John Roberts had mixed ground glass in with the flour he sold to the American Soldiers.

~John Roberts actually escaped through a tunnel in his basement.

And so it goes.  Classic tricks from the house haunting bag of tricks.  Truth becoming what we make it out to be.

The house, somewhat modified,  is still there and people live in it.  The picture below shows it as it was in the year 2000. 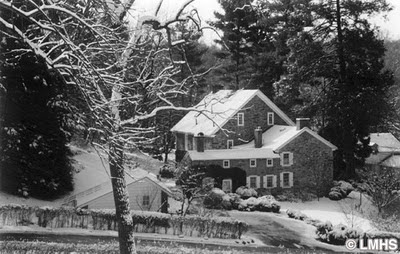 Email ThisBlogThis!Share to TwitterShare to FacebookShare to Pinterest
Labels: Creepy Crawlies, Dredged from the Past, Family, Genealogical, Memoir., The Traitor

About three years ago I wrote my first Adventure's Ink post about a haunted house. I think these things can and do happen but not quite as often as people's cruelty to others.

Your photos and map are very nice.

My wife and I had some really weird shit occur in our first house. Making things even stranger, it was a brand new house built in what was once a cow pasture.

I keep thinking about writing about those episodes but never get around to doing it.

If you ever visit, don't forget to pack your particle accelerator.

I posted about this a few years ago as well. Here's the link http://termitesofsin.blogspot.com/2009/07/nanas-watching-you.html

No doubt it exists but what exactly it is, is another thing.

I've heard lots of anecdotes like this, but never personally experienced it.