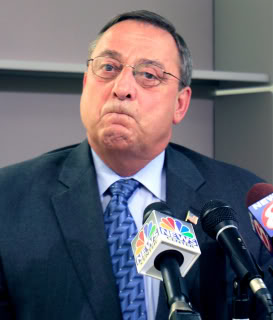 Frankly I am disappointed some Midwest Teabaggin pretender from Wisconsin has managed to hog the national spotlight this past week or so.  It is a matter of pride for me that the World knows we Mainers can be as numb as any  Bud swizzlin don't tread on my camo boots redneck out  there in Fly Over Land or where the South will rise again.

Anybody's governor tell the NAACP to kiss his butt recently?   Yeah that's right mine did and yours didn't.

Anybody's governor follow up this classy remark with the claim he weren't racist cuz he has a "black son', even though as it turns out his "son" is from Jamaica Mahn and not even his son.  Yeah, right again.  There's only one and it's my governor.

Anybody's governor have trouble remembering just where he has lived since childhood, claiming he "has lived here in Maine his whole life", when in fact he lived long enough up Canada way to get married, father a couple of kids and land a job and keep it?  I bet none the others have, but mine did.

Anybody's governor claim he won't be held hostage by special interests at, wait a minute.......... you guessed it, a luncheon put on by a special interest group and then the next day show up to a Pro Life hoe down just to drive home his point?   Yeah, there's only one and he's ours
.
Anybody's governor tell Obama to go the Hell?  Yeah?  Well, I'll give some of y'all that one.  At least he's keeping up appearances.

Paul LePage is emerging into a figure larger than the legend in his own mind.  A true blue red Davy Crocket, aw shucks ma'am want me to skin that there Bahr fer ya.  Paul is not afraid to tell tall tales, manufacture falsehoods about his enemies and build mountains where no molehills had existed before.

After winning the Governorship with a landslide victory with 38% of the vote, the governor has now settled down to the serious business of  freeing Maine from the iron grip of it's evil citizenry and handing over the reins to the kind gentle stewardship of developers and carpet baggers from away.

Thanks Paul, I know you and the Koch brothers have Maine's best interests at heart.

Well, my glorious governor, darling of the Teabagger right-wing because she is not a WASP and wants to eviscerate all state functions was called a nasty ethnic slur by one of the certified redneck, good old boys who happens to be, unfortunately, my state senator.

In fact given how the Teabaggers want to end birth-right citizenship you could almost call my governor an anchor baby. As for the state senator, well libel prevents me from saying much beyond how his kinfolk not too long ago is whispered to have enjoyed dressing up like ghosts.

Wink, wink, nod, nod if you know what I mean.

It sounds as though there are going to be fed-up citizens protesting in Maine in the not too distant future too.

What no slurs against police, fire or teachers yet? Those lazy good for nothing are gobbling up all our hard earned taxes that we don't pay.

Interesting, this morning I ran across something about your governor. A stupid remark that he made about BPA in plastic bottles and other stuff.

This should put him on top again for you!!

Dude! Where in Canada? I know some folks in two different provinces with the same last name as your illustrious governor. Maybe I could do some digging around and find out some useful information for you and your left-leaning friends.

Hey, I might be conservative, but I do love mischief.

In your comments section a few essays back you stated:

"Except Catholics, they always looked pissed. But then they know no matter what they do it is a sin."

This made me laugh out loud, because to a degree it is true. Very funny.

I am playing a bit of catch-up at the moment as I have not been perusing the Internet as much lately because my home computer has a broken modem (and I am too aggrivated at it to go through the headache of replacing and updating yet with the new equipment I bought).

.... you can keep your nut job... or how about we put a bunch of tea bag governors in a room with a bunch of NFL players... bet those guys could teach a few lessons about collective bargaining.

i don't have a teabagging governor..i have an asshole

OK, I concede. Your teabaggin' governor is the winner.

Condolences in any event.

Shit, Kasich better get on the ball. C'mon, Johnny make Ohio number one in lunacy!

Our gov here in Tennessee just owns one of largest chains of oil/gas/truckstop companies in Amurka, and can't wait to take collective bargaining rights away from our teachers. But, gotta admit, your guy has the "stupid with balls" factore ours only dreams about.
Just found your site via Kulkuri at Yoopers in Crackerland, and will blogroll you ASAP!
C'mon over to Squatlo Rant and sit a spell.
And be careful with those Davy Crockett cracks, the boys with the deer rifles take that shit seriously down here...

You know.... this could be a good game... like, see, Ill' trade you two Walker's for one LePage and a couple of Brett Farve's.... but only the one wearing the Jet uniform, not the Packer one.

and YD Granny //i have an asshole//
Well, Walker is equal to a couple of assholes,,,, and I'll still throw in the Brett Farve card along with one Tom Brady.

OK, your teabagger wins, for the moment. But you just wait. Florida, the state that gave us the likes of Claude Kirk and Jeb Bush is poised to reclaim its rightful place as the carpetbagger capital of the Union. His name is Rick Scott and he was elected in spite of being the head of a company guilty of the largest Medicare rip-off in history, garnering a $3-billion (yes, that's with a B) fine.

I'm with YD Granny. Our asshole is Chris Christie.