Wingers with Woodies - The Saga Continues 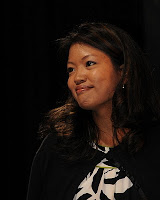 Wisconsin being taken over by communist agitaters concerned citizens in recent days has bunched the panties of every Right thinking American in the country.  I know this because I visit their sites, gag on their news views, and revel in their swill.  I would do the same with the Commie Left, but their swill and their sites don't have the bite I need or want when trying to set my righteous fires aflame.  They are all about getting along and worrying about grandma and her meds.  While the Right Swingers know how to party.  They are sure we are going to Hell in a handbasket because ..........this week it's the unions.

Damn.  There are still unions around?  Far out.  Thought they had all lost their jobs when owners figured out it was cheaper to build huge factories overseas and stock em with workers who knew the value of a buck.  And that's what they paid em.  A buck.

Michelle Malkin I can almost stand.  At least she doesn't look like Ann Coulter - the horse faced woman from .....either Palm Beach or Manhatten. Take your pick.  Whenever I see Ann I want to hand her a carrot.  I think Michelle is actually a better writer and she is the only one to ever stand up and tell the World that Chris Mathews is a brow beater.  I heard she joined a brow beater support group nestled next to but not too close to that Libertarian Think Stank, "Competitive Enterprise Institute".  But I digress.

Michelle's blog has been on the defensive in recent days.  She is doing her best to thwart those evil union bosses from poisoning the various state wells with their anti- American propaganda.   At least she has a sense of humor.  Her satirical article about using GPS tracking on truant teachers was actually pretty amusing.  And she is at least willing to offer information and links that will take her readers to opposing viewpoints.  Her latest is her posting of the "Purple Army's" schedule of state visits to rev up the solidarity of the teachers.  And she also has posted the links to sign an online petition for the evil NEA.

Note - if any Winger claims this is a fake photo - please take it up with Wikipedia - I poached it from their site.
Posted by MRMacrum at 11:18 AM

IM IN UR YOON YUN STEALIN UR CADDY

First the gay homesexuals had all the power to destroy America, and now it's us lazy, unionized bums. This is a big responsibility for a new supervillain. Whom do you suggest we blow up first? We could probably wipe entire cities from the map with our devious, taxpayer loot-thieving ways.

I must respectfully disagree. I think Michelle Malkin is far more obnoxious and grating than Man Coulter. Both of those columnists have appeared semi-regularly in our local paper. They both bite, but Man Coulter at least tries to be funny sometimes (without much success).

From what I've heard about Michelle Malkin, she was dirt poor and pug-ugly when she lived in the Philippines. Somebody took her under his wing, paid for her 8,000 face lifts, and her column is ghost written.

Even if that isn't true (urban legends abound on the Intertubes), everything she says just grates like chalk scraping on a blackboard.

Ann Coulter walks into a bar and the bartender says, "Why the long face?" Badabing!

PS-- I know it's the dumbest comment I've ever left and an old joke I once heard in reference to Celine Dion. Always good to laugh it all away.

When I see Malkin I am overwhelmed with the image of a rabid Pomeranian foaming at the mouth and nipping at people's ankles.

Randal - They had to get around to you overpaid, underworked union losers at some point. Personally, I think they shouldhave taken away your union cards back when St. Ronnie fired the Air Controllers. That was their window of opportunity and they blew it.

Yellowdog Granny - Or she is actually two she's and a him.

Tom Harper - Respectfully disagree? Well you can gussy it up any way you want, but you still hurt my feelings. You Lefties are so insensitive.

I defer to your opinion at this point as I admit to only reading a few or less than that of Ann's writings. I just can't accept the fact that a barnyard animal is an expert on anything other than spreading copious amount of horse dung around.

robin - She would probably answer, I'm a Republican."

Beach Bum - You are the lady's man aren't you.

I liken Michelle more to a pomegranate. Somewhat pleasant on the outside, but all red and nasty on the inside.

I don't believe there's been an honest conservative since Bill Buckley. Or was that Lord Buckley?