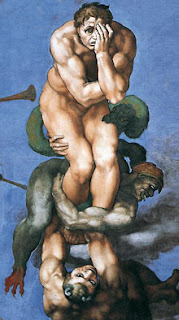 Has anyone ever spent time punching up the "next blog" icon at the top of their page?  Every once in awhile when I am feeling restless and have cruised my usual sites for stimulation I will seek new voices by hitting that button.  Just the other day I did this.  And what did I find?  I found God.

Of the first few blogs I saw, all were right in my face with Jesus, the Lord is my shepherd, and praise be it that God smiles on all of us.

I took a breather.  Too much religion in too short a time.  I walked away from the computer to collect my heathenistic soul and regroup.  Many minutes later I plopped into my hard wooden chair and punched up "next blog" again.  Again another blog touting the wonders of prayer and duty to our saviour.  Punched it again.  And yeah, once more I was told in no uncertain terms that Christianity was the path to true enlightenment.  Even given chapter and verse.

Almost in a panic, I began punching the "next blog" button over and over again, hoping against hope that the whole blogosphere had not been born again while I slept.  But no, every blog that came up had serious religion wrapped into every message or post.

Where were the obnoxious teen angst blogs?  The Mommy blogs?  The I hate Liberals blogs?  Not even one blog that used squares and other wingy dingy font like images came up.  I must have hit that button 50 times and God was all I got.

Like some biblical previous believer who had been beat down over the years and lost his faith but then was confronted by events that were supposed to bring him back into the fold, I was struck dumb and stupid because nowhere did I see anyone who was not all a twitter over their religion.  Sacrilege had disappeared, replaced by pleasant faced bible thumpers urging me to see the light.

It is said there are no atheists in a foxhole.  What do they say when one is in a foxhole hunkered down to miss the fire and brimstone being lobbed at them?  What do I call that?  I am not exactly an atheist.  I am not exactly a believer.  Something in between suits my fence straddling style, but I felt inundated and overwhelmed.  What I wanted, no, make that needed to set the Blog World right for me was one blog that spouted the teachings of , oh I don't know, Satan or maybe at least Ozzie eatin a bat on stage.  Something that reflected the reality I thought was really out there.  Hell, I would have gladly accepted some brooding Goth or Emo blog.

Have I been hiding in Maine too long?  Has the western world really gone over the edge?  Am I alone, the last heathen standing?

Where's Randal when I need him?
Posted by MRMacrum at 4:24 AM

Email ThisBlogThis!Share to TwitterShare to FacebookShare to Pinterest
Labels: Just kiddin, Religion, Sanity, What is It?

That is hilarious. The loving God of Fred Phelps is after you for believing on George Carlin. Run to the mountains; "Mountains won't you hide me?"
I only hit next blog once long ago and never again. Can't recall what came up but not anything I was interested in. I may have to try it again.

Click a blog button for Jesus! Hot damn, and hallelujah!

This is exactly why I do not do that...EVER.

There are certainly a lot of people that use their blogs to proclaim the holier than thou attitude...I avoid them the same as I do in real life. Actions always speak louder than words for me....

Bwahahahahahaha!! The prayers are working. Resistance is futile, Crum.

Has anyone ever spent time punching up the "next blog" icon...

Yeah, many times and they tend to follow follow certain types of blogs or strains at, I guess, random times.

As I am sure you already know on the Blogger profile we can find a list of similar blogs by clicking on the movies, books, or interests with add to it.

I clicked on the "South Carolina" location listed on my profile once to see who else blogged in this Wonderland and was rewarded with scores of religious types from the accepting to those who could teach the Taliban how to be a pious nutcase.

Once again George Carlin comes to the rescue: "Think of how stupid the average person is, and realize half of them are stupider than that."

Be glad you're in the boondocks.

I tried that next blog thing a few times and got the same results you did, maybe Google is operated by a bunch of christians and it's rigged to do that? You know, slanted, but hey, drop into their blogs with comments if you want to stir things up and amuse yourself, it's so easy to piss off christians.

This blog is open to invited readers only
This is what I got when I clicked on next blog. Couldn't move forward from there, had to go back.

I tried the next blog thing a couple of times, but didn't have your results. I seem to remember once the theme was Cape Cod blogs.

I have been out of the blogosphere for a week or so, but I can stand with you solidly in the "I know of nothing" camp and God is certainly at the top of the list of things about which I know not.

I doubt. I am certain of that.

I once clicked next. It took me to someone else’s blog. It was disgusting.

When you was at those god loving christian blogs did you notice that they live pretty damn fancy? I don't recall visiting any christian blogs where they were complaining about their lot in life but I know that there are plenty of christians that have pretty sorry lives.

Blog Fodder - I do seem to be getting some messages.

jadedj - Smart. Very smart. But some of us just have to touch the wet paint.

ain't for city gals - Blogs should be extensions of our personalities I guess. Probel is, so many extend the wrong information.

El Cerdo Ignatius - It would seem so. But I will continue the good fight as long as the slim jims last.

Beach Bum - If you ever want to put yourself at the front of say the bloggers of South Carolina, just change your profile some. I usually answer another stupid question. Not sure why I like being in front, but there it is.

susan - Excellent. Hopefully I sit somewhere on th eplus side of that average.

BBC - You seem to have mastered techniques to piss off pretty much anyone you want. You are the master.

Kulkiri - "Invited Readers only" - yeah the invisible velvet rope of the blogosphere.

John Myste - SO you are one of those sniffing types who check for dust bunnies and dirty dishes in the sink when you come to visit. Yeah, I know your kind.

BBC - Yeah, it seems that if nothing else, they gussey up the image to reflect a kind of well being based on physical trappings.

Everyone in the group shot looks like they just left Sunday School and the radiant looks on their face tell me Jesus has touched them in profound ways. Except Catholics, they always looked pissed. But then they know no matter what they do it is a sin.

Nan - All those damn rug rats look alike and unless my experience is the exception, they all spew ugliness from every orifice they have and grab exactly what you don't want them to. Yet we still produce them like we're gonna run out. ;)

It's a sign from the Lord! God is trying to reach you through the Next Blog button, and you're ignoring Him :)

I've never clicked on that button, but I'll have to try it. Your description brings back those halcyon days when I used to surf those traffic exchange sites -- Blog Explosion, BlogMad, etc.

Snowpocalypse killed me dead, but hardee har har chortle & wheez, the *exact* same thing happens to me. 90% of the next bloggers are über-religious, usually Mormon. Magical underpants are calling to me, apparently.