I had an anti Reagan post well started when I remembered the saying, "Never speak ill of the dead".  And even though I will never ever ever think positive thoughts about St Ronnie, I decided to let his 100th birthday pass without any snarky or vicious commentary on my part.  Let the fools who worship him, worship him.

The current situation in Egypt?   Well it seems to be stuck in limbo at the moment with the images of protesters on the tube losing more ground everyday.  Mubarak is supposedly out but.............If it goes on much longer, no one here in the States will even notice when it is finally over.  You can only divert our attention from "reality" TV for so long.

Okay what about the recent troubles within the ranks of the Republican Party.  Well, I guess they got pissy with each other (which by the way is noteworthy in itself because they did it publicly).  Snarky comments passed back and forth.  Queen Sarah snubbed the big wig CPAC hoe down and Santorum claimed her absence was because there was no money in it for her.

The Donald hinted he might run for president.  This caught my attention for a couple of minutes.  I imagined a new Trump Plaza in place of the White House.  High hatted attendants wearing long coats opening doors while dignitaries holding fancy miniature poodles stepped out of 30 foot limos and looked for paparazzi to take shots of their latest outfit bought on Rodeo Drive.  Donald and his hair would transform the American experience completely from apprenticeship stupidity to full on no bullshit stupidity.  His comments that "we are becoming the laughing stock of the World" told me how out of touch he and his well heeled band of clowns are.  Donald, we already are the laughing stock.  That boat sailed at least 8 years ago.

In the meantime, Republican elders clashed with the Tea Party punks over how much and where to cut 100 billion dollars out of the budget.  Basing their demands on the notion that they were bound to fulfill their campaign promises and do it right away.  Wonderful sentiments and even though the old Republican farts caved, the reality that is DC politics has yet to sink in or through the thickened skulls of the noobs from the fringes.

On the sidelines, the Democrats are rubbing their hands and cackling.  The shoe is on the other foot now and they get to play spoiler.  I am sure they will do it well.  They have had many years of education courtesy of the Republicans, who mastered the technique back in the 1980s.

And the fiasco that is American politics continues.

I noticed that the State of Arizona has now filed a counter suit in response to the Federal suit filed by the Justice Department over Arizona's new tough immigration law.  Arizona bases their suit on the fact that the Feds have done nothing to protect their borders and it is just too expensive for them to do it themselves.  Maybe it is just me, but violating rights with arbitrary ID checks is not supported by any language in the Constitution.  Anyway, both the Feds and the state of Arizona seem intent on wasting more precious dollars and manpower in an effort to somehow put the cork back into a broken bottle.

Visit msnbc.com for breaking news, world news, and news about the economy

At Yooper's Blog I was entertained with a video of Lawrence O'Donnell interviewing Rep. Steve King (R- Iowa). Apparently according to an Examiner poll, 46% of the Republicans polled believe Obama is a Muslim.  I wonder how many believe the World is flat and that Ronald Reagan is the center of the Universe?

Rep. King claims he believes that Obama is a Christian, but he has done nothing publicly to dispel this idiotic claim oozing from the Right.  To Lawrence O'Donnell's credit, he would not let King off the hook.  Asking him questions like "Do you have a Christian ID?" - or "Can you prove you are indeed a Christian?"  The man was squirming so much I was waiting for someone to ask him if he needed to pee. 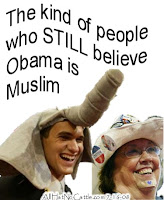 My first thought about this religion hang up is who the Hell cares?  Apparently 46% of some sample group does.  Then I thought about why religious affiliation is so important in a leader who is supposed to represent all the people in their constituency, regardless of religion.  Apparently the religious folks hold more value to how our leaders pray than what country we invade and why.  Tied into this is the stupidity over where Obama was born.

If you actually believe it matters what religion Obama favors then you are an idiot.  You are assigning him more power over your life than he deserves.  Pray to your god and let him pray to his.  Our country is set up to allow this.  And you should respect that.

If and when he leads us down some irrevocable road like Bush did, then you may have something worthy to bitch about.  Until then, you Birthing Islam hating idiots may as well just shut the Hell up.  The man is president and that's the fact of the matter.  Your whining now is just so much background noise.

Agreed, Obama's religion or lack of it should not be an issue, but there are those so-called Christians that figure if he doesn't belong to their particular cult, it doesn't count. I say "so-called Christians" because they sure don't act Christ-like!! The longer this bullshit goes on, the more I think it's mainly about race. They can't stand the thought of a black man in the White House who isn't serving tea!!

Do you recall the major concern about JFK pre-election to the Presidency was just how much effect his Catholicism would have on his position? It turned out to be a moot point.

The person who's done much to explain the current breakdown in civil, or even sane, political discourse in the US is Joe Bageant. You might enjoy this essay he wrote in December called 'america-y-ur-peeps-b-so-dum?'

The current situation in Egypt?

I wish them the best and hope like Hell at least a few understand that while its "easy" to get rid of a dictator the hard part comes to organizing a workable government.

The Donald hinted he might run for president.
I was in a Honda dealership yesterday sitting in the waiting area and when that was announced on CNN all seven or eight of us there broke out laughing. The crazy thing the little group looked to be a rather diverse cross section of America from African-Americans, Hispanics, WASP's, and me the redneck.

I'm a vet and to a certain extent I'm pro-military but you ain't going to balance any budget until you end the wars, cut the DoD budget, raise taxes, and do a few other very unpleasant things. Anything less and the politicians might as well wish for the tooth fairy to solve the deficit.

I had to stop that video. Yeah it was good to watch him squirm but he and his constituents are such complete morons...I was fuming. Thanks for ruining my morning ;-)

The current Republican party devouring itself? That would be good. $100B? They won't save a buck. Stupid fucks. The funny thing is these people worship Reagan, but if Reagan were prez today the Tea Party would be ripping him apart. Of course, they'd probably be ripping Jesus apart too because he's a dark-skinned socialist who gave out free health care.

@Kulkuri - Ghandi once said "I like your Christ, but I do not like your Christians. They do not act very Christ-like." While this doesn't define ALL of them, it fits the ones we're talking about.

I don't think we're the world laughing stock...YET. Too many really care what we think and do. Maybe we're more of the mom/dad who's clearly on the drinking/gambling/porn habit that is going to bring the house down and all the kids are only going to try and help for so long.

And yeah, I agree with BB - getting Mubarak out is the easy part. What's next is the tough part. It will be so for decades.

I think that only applies to relatives,neighbors and Episcopalians......I think Dead Reqans and fish are fair game. Go for it. Nice ramblings today

I hope you're right about: "Democrats are rubbing their hands and cackling. The shoe is on the other foot now and they get to play spoiler. I am sure they will do it well."

I hope you're right. But the Democrats' biggest talent is snatching defeat from the jaws of victory, and I don't know why these next 2 years would be any different.

Kulkiri - No, we can't fix stupid, but every once in awhile I like to point it out.

Susan - Oh do I. My hard core Republican mom was positive the Earth would end if a Catholic became President.

Thanks for the link. I will check it out.

The problem with laughing at the Donald and his threat to compete is anything is possible now days from the Right side. They have really gone off the deep end.

Chef Cthulhu - Glad I could spoil your day. Anytime.

Well, if my very black republican mother decided to not vote rather than vote for Ronnie, then I guess maybe you are right about what the current Tea partiers might do if he was in office now. I kind of wish he was still alive so he could see what his stupidity set into motion.

okjimm - Thanks. The Reagan post I shit canned might have caused you to suggest I see a shrink.

Tom Harper - I hope I am also. I figure maybe some positive vibes might be better than all the negative ones I have been sending intheir direction.