The Duke of Puke 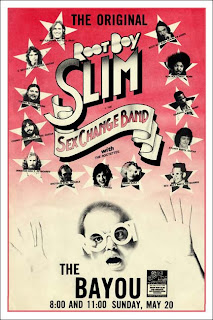 Four Dinners caught my eye with his post entitled "Hit Me With Your Rhythm Stick" .  It references a great song by Ian Dury & the Blockheads.  His post was not really about the song.  It covered his take on comments, free speech, and applauded a fellow blogger's free spirit and in your face style of commentary.

Ian Dury was a punker/new waver from across the pond.  His rise to fame paralleled the rise to fame of what might be considered an obnoxious American version of himself - Root Boy Slim. (punch this one for the song "Boogie til you Puke"). Both performers were considered outrageous for the times and both left this world earlier than they should have.

I first saw Root Boy Slim and the Sex Change Band in some bar in the Washington DC area back in the late 1970s.  Touted as a cross between the punk experience from England and the great Blues of the South, Rootboy Slim put a jagged edge on contemporary American music.   His music was best heard after too many beers in some run down dive with a tiny stage crammed into the corner.  His most famous song, "Boogie til you Puke" still ranks as the best binge drinking song ever.  One concert at the Varsity Grill in College Park, Maryland turned into a riot that spilled into the streets and onto Rte 1.  He was banned by local bureaucrats from playing there ever again.  But public pressure brought him back for a coliseum gig a couple of years later.  He died in 1993.

What I knew about Root Boy was his public persona.  I had no clue of his real world life until I googled it.  Raised in what I would assume was upper income circumstances, he misspent his youth getting kicked out of one prep school after another.  But he did land a scholarship to Yale and was in the same fraternity with Dubya, the future president.  Dubya, as president of the frat, banned Root Boy from ever stepping foot back into their frat house after an apparently raucous night of debauchery when Root Boy came back to campus the year after he graduated.  Root Boy was also arrested for climbing the White House fence while way too high on LSD.  All this before he formed his band.

I often wonder about guys like Root Boy, Divine, Iggie Pop, and all the other icons of outrageous behaviour I enjoyed back in the day.  Their music and films maybe did not reinforce my own struggle to come to grips with the bland culture I found myself in, but their music and films did prove I was not alone in my dissatisfaction with the status quo.  It seems that youthful rebellion is woven into our humanity more as a reality check for the rest of us than just the surface pain in the ass it seems to come off as.

I have no clue now years later why I did some of the things I did as a brain dead punk.  I am guessing it is because I had no clue at the time of entering into foolish and destructive behaviour why I was doing them.  If it felt good, I did it.  I survived.  Root Boy did not.

Email ThisBlogThis!Share to TwitterShare to FacebookShare to Pinterest
Labels: Dredged from the Past, Drunk and Disorderly, Music, Personal, Pop Culture

Compared to many of you I would have to say that I was pretty square when young and didn't get in much trouble or do a lot of foolish things.

And I've never listened to near the music many of you have so I didn't know about those dudes at all.

After the Navy I got busy with what I thought was normal, working, getting married, raising kids, building and driving a couple of race cars, etc.

But in my defense, in my youth I learned some damn useful trades and skills that still come in handy today.

Never got into the bar band scene, most bands were trying to be the new Beatles, Stones, whatever. When I was in a bar with a band, I usually didn't pay much attention to the band and they were too loud to understand anyway. Spent most of my drinking time in quieter locales.

Oh, if only Root Boy Slim had been pretzeldent instead.

I had forgotten about Long Beach, New York until it showed up on my tracker. My very first long haul load was to there. A load of lumber that I had picked up in Kettle Falls, Wa. Mutter, mutter.

I've never heard anything by Ian Dury or Rootboy Slim. My favorite punk-blues band was Jon Spencer and the Blues Explosion.

It seems that youthful rebellion is woven into our humanity more as a reality check...

I completely agree and wonder if it has a Darwinian function? If it does this may offer some hope. Right now I'll grab at anything with all the power blocs that desperately cling to keep their control on things a people.

Never heard Root Boy Slim until just now. Glad I did. I'll be looking for his stuff.

I think "Youthful rebellion", in some measure, is inevitable for one simple reason: at some point in growing up we take more cues from our peers than our parents.

That usually happens as a pre-teen / teen. If you fall in with more "rebellious" types it is more evident. Even running with a pretty straight-laced crowd as I did, there were still cues I took from them that I knew my parents wouldn't approve of, and vice-versa.

So the tried and true parental saying of "I didn't raise you to be that way!" is a pretty accurate statement. But because of the above I also think it is somewhat universal.

I think it's part of the overall model of our development.