Vanity at the End of a Gun 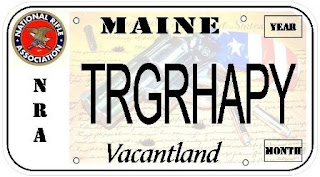 Okay fine.  I have no problem with this.  Shout your allegiances any way you want.  You love guns and the freedoms you are fooled into believing guns protect, it's fine by me.

What I do object to though is state financial support given to a private sector interest group on the state's dime.  Apparently $10 of the $20 cost of the license plate will be sent to the NRA.  This really really pisses me off.

This would be the first advocacy plate, and Maine has more than a few, where the income derived is partially used to support a private group outside our borders.  All other incomes from the plates are utilized in state.

We have Vet plates.  The extra income goes to supporting Mainers who are Vets.  We have college plates - the money goes to the state colleges to help scholarships defray expenses.  The list is long, but in every case, the money stays home.  If a private citizen wants to send some extra jingle NRA's way, let them send it.  But don't, through legislated means, make the State of Maine subsidize a private interest group.

In a period of state overdrafts and economic woes, it seems odd to me that the newly elected Republican majority would even consider doing this.  The word at this point is they probably won't.  But we are experiencing some very odd times and stranger shit has already gone down elsewhere.

The republicans came into power on the promise of setting our economic boat on an even keel.  And yeah even though the money derived is chump change in the big scheme of state budgets, even Maine's, writing a check that is going to have no direct benefit to the residents of Maine seems to be more than hypocritical, it is just wrong.  If this is the kind of "fiscal responsibility" I am to expect from our State representatives, then I would say that any efforts they push in the areas that really matter are suspect.  The more I pay attention, the less confidence I have they have my state's interest at heart.  More fodder to support the notion that Maine is being sold out from under us is more like it.

Image is a Photoshopped mock up I poached from Dirigo Blue
Posted by MRMacrum at 10:31 AM

The republicans came into power on the promise of setting our economic boat on an even keel.

Yeah, what a group of republicans think about fiscal responsibility is a really curious set of contradictions. Down here Good Old Nikki is about to slash state funding of Medicare and Medicaid to the point a bunch of rural hospitals and independent physicians will have to close and the big hospital I work at will be forced to make some hard choices to cuts its expenditures.

All this will force people without health care into already overstretched emergency rooms of surviving hospitals pushing them more into the hole. A hospital purposed "users fee" is throwing the republicans into fits with their usual screams about evil taxes.

"The more I pay attention, the less confidence I have they have my state's interest at heart."

That's the downside to paying attention. I keep finding out things where my first reaction is "F#%!!, why did I have to go and read that? Now I'll be pissed off the rest of the day."

That is pretty outrageous, and I am wondering if it is even legal.

Beach Bum - It certainly seems they are intent on tossing the baby out with the bath water. Which only feeds my suspicion that The big money interests have finally found the perfect weapon to take over politics in this country. A population of rubes they have fooled into thinking they are the advance action in saving America from some kind of left wing evil. It's actually quite ingenious.

Tom Harper - Lately that seems to be every day.

jadedj - Oh, it will be wrapped in a cloak of legality if it happens. All above board and sleazy bullshit as usual.

Randal - As long as it goes to pay for the electricity, then why not?

what a crock of crap...there audacity amazes me..

If I go to grad school in Burlington, VT would we almost be sort of neighbors?