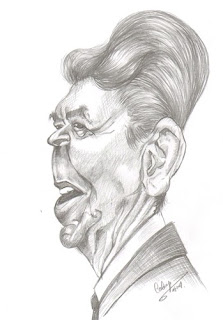 I haven't looked yet, but I guess one of the polling organizations created a poll regarding who America thought was the greatest US president ever.  I probably won't look either.  I am not interested.  A poll like that would have to have 44 choices.  I can't see any American worth their salt sitting through more than maybe 3 pr 4 choices.  Especially if the pollster called during  the show most of America can or probably should identify with, "The Biggest Loser".

So I would guess in their quest to be helpful and create a more positive experience while accommodating our less than 30 second attention span, the kind pollster filtered out the obvious dogs and also rans boiling the choices down to the obvious.  Ronald Reagan, JFK, FDR Teddy Roosevelt and maybe Lincoln, although he has gotten some bad press of late, especially in the kindly Sun Belt.  Oh yeah, George and Thomas J might make the cut.  These guys might be included only if the poll was created by a non-Republican and almost independent polling group and they dialed numbers outside the Texas area codes.

If the Republicans sponsored and paid for it the choices would be:

I know if I was trying to be fair and objective I should keep my trap shut until after I have seen the results of the poll.  And of course any of you who are thinking in this direction, well, you would be right.  Life isn't fair and I can make up anything I want on my blog.  I can delude myself.  I can try to delude you.  The only thing I cannot do is sell ludes to you.  That would garner me copious amounts of the wrong kind of attention.

The other factor to consider is that I know for a fact that St Ronnie is not the greatest president ever.  He is the worst.  I know because I lived through his hamfisted governorship of California and then had to feel the pain  as he took credit for saving us from the Commies and did not take credit for selling us out to Iran.  So there you have the facts and truth.  Believe it.  My facts don't lie to me and yours probably do. 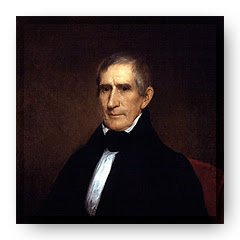 His slogan was "Tippecanoe and Tyler too."  With a slogan that catchy, he just had to win.  Bill became a war hero by turning down the sheets for Gen. "Mad Anthony"  Wayne after a hard days work tossing those injuns off white man's land.   He worked himself up the ranks chasing Indians until the grand day he was given credit for killing Tecumseh, the most underrated chief in the annals of the Indian Wars.  Indians or Commies, it mattered little who was the enemy as long as a guy could get credit for kicking some butt.

Harrison was cast as a simple backwoods hero, chaste, humble and he sipped cider by the night fire in his log cabin.  When off the set, his glasses tended to have champagne in them and his top pocket a hanky of the finest lace.  He was Ronald Reagan before Ronald Reagan was Ronald Reagan.

He had everything going for him to be just another one of the bunch, lost in the herd, a face in the crowd., nothing but another flounder cashing in on fame he didn't deserve.  Suddenly fate threw him a curve ball he could not resist.  A chance to pontificate for two hours in the rain during his inauguration.  And of course he died a month or so later.  Heroics like that have to come to untimely ends.

Because of his inability to get anything done, undone, or even slightly started, he is awarded the BoZone Award for excellence in Presidential stuff.  He did no harm as President.   He took care of  the harm factor before he took office.

I'd never even heard of that one (Canadian history classes tended to teach a lot of world history) but I already agree with you.

Good call. He did all his damage before becoming president.
Agree about Tecumseh as being a highly effective chief of the resistance. Indian as terrorist; white man as victim. Sounds like Israel.

I know Johnson had the Vietnam thrust upon him and all his advisers said to keep it up..but he did pass all the equal rights laws, etc.

I like your criteria. After some thought (I'll leave it to you to define "some") I realized that I have an even better chance at winning the award.

A+ sir. The best pretzeldent is the one who fucks shit up the least & back then, mail took weeks to get to ma & pa down the street.

susan - You Canadians are as bad as Americans. Your grasp of American history is just awful. Just cuz you live next door in no way absolves you.

Blog Fodder - Many in the US consider those "the good ole days" when men stood for something and moral backbones abounded.

YellowDog Granny - No president leaves office with clean hands. Well, with the exception of Harrison of course.

Randal - Well at least the trains ran on time back then. All one or two of them.

okjimm - methinks it is shaped like a toilet roll.

Do I detect a dissing of our own King of Kings, Saint of Saints Ronald Reagan? Not only did he singlehandedly defeat the Evil Russian Empire, he also singlehandedly created FREEDOM in Central America. That commie government in Nicaragua was just a 2 hour drive from the Texas border. They were just about to enslave all of us, but our Esteemed Leader gave them the evil eye and they limped away with their tails between their legs.

And don't forget, Ronald Reagan got the government off our backs.

I also like Teddy Roosevelt because when Beck mentions his name his face starts to spasm. Which I hope one day causes Beck to have a stroke. The only problem is that he works at Fox and Beck probably could go on for the rest of his show without his crew or assistants noticing any difference.

Truman is also popular with me, anyone who hangs out at Key West is okay in my book.

Tom - People think of Ronnie as th egreat communicater. But his greatest skill was pulling the wool over our eyes. All that time spent selling washing machines for GE certainly was not wasted.

Beach Bum - Anyone who might make Beck blow a gasket is okay in my book.

I have some prez's I liked, some I didn't, and some I think were the worst thing to happen to us at that specific time in history. But none of them were as great as our historians would have us believe.

BBC - You back in town? I knew there was a reason it had been so quiet around here.

Can certainly agree, and attest, to RR being the worst thing to happen to the country in my lifetime, both on and off the screen. But can't agree on greatest president ever. My vote would go to James Polk, although I don't have any clue what he did or didn't do and I'm too damned lazy to look it up. My choice is based solely on a great song about him done by They Might Be Giants that I heard on the radio once. He's got to be the only president who ever had a rock song done about him and therefore, he gets my vote.

And that's better criteria for a vote than those expressed by the great majority of dumb asses in this country.

A good choice. I don't think I would have picked him, but your rationale is excellent.

Life isn't fair and I can make up anything I want on my blog. I can delude myself. I can try to delude you.

As you can guess, I believe your dislike of Reagan is more visceral than logical. But I know your mileage varies and I respect your point of view.

The other day, I made a point of watching Reagan's Berlin Wall speech from 1987, and then JFK's "Ich bin ein Berliner" speech from 1963. I like Reagan's speech, but JFK's was better.

Chew on that, sir. Have a great day. Heh.

Mr Charleston - I wonder if there is a Polk Polka. Knowing those carzy Poles in western PA, I would guess there are more than a few.

Robin andrea - my rationale is always good. Problem is it is not often anyone agrees with me. Thanks.

El Cerdo Ignatius - I agree on JFK. For that matter almost all of the poitical big wigs back then were conservative in some respect. And many of the conservatives leaned towards the Left when it made sense to do so. I miss those days.