Smile When You Brandish That Gun 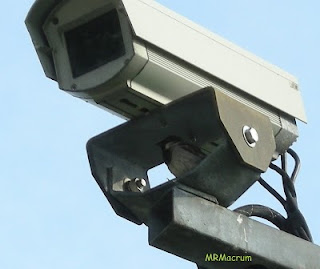 Todd over to "Power Elite" wrote about Atlanta's recent efforts to consolidate all the video cameras in the downtown area into a giant monitoring network of public and private cameras to "prevent crime".   They will even be juiced up with spiffy software so that if someone should brandish or fire a gun, the cameras will swing into action and catch at best a fuzzy image of the aftermath.

And the nations of the world  scramble to jump on this latest law enforcement tool.   Somehow we are supposed to feel safer knowing that catching a crime on tape somehow prevents it.  I guess there is some logic here.  I'll let you look for it, I'm too busy trying to duck the cameras.

On my recent trip to Philly, once we had left the wilds and semi wilds of my rural outpost, I saw cameras everywhere.  My image is now safely trapped in computers up and down the eastern seaboard.  I flipped a few of them off and one I even contemplated mooning.  But being a mature adult and the fact that it was cold outside allowed me to find my center and just move on.

I don't hate the cameras.  I just hate the idea and excuse used to place them on the streets on my dime.  Just as I hate supporting through my tax dollars multi billion dollar agencies tasked with listening to my phone calls, sifting through my electronic communications, and stopping me on the street just to log in my name.  As our private lives become less ours and more theirs I am not feeling safer.  I actually feel less safe.  Allowing the government or even commercial entities to scrutinize my habits, movements, and inclinations increases my up til recently healthy level of paranoia.

Yeah, yeah, yeah.......We are supposed to fall for the line that "if we are following all the rules, we should not be concerned who is watching".  All the government wants to do is protect us, protect our rights, blah, blah blah..............Bullshit.

The government, any government's first priority is to stay in business.  Staying in power is the main focus.  Protecting the citizenry runs so far off the back as to be a laugher in the scheme of government action.  This is a basic truth that is found in every government everywhere.

Some governments keep their hands on the tiller through repression.  Some manage their countries through carrot and stick policies.  And some like ours bullshit us with slogans and empty promises.  No matter the means, the end remains the same.  To keep us grunts on the street from getting out of control.

It is only going to get worse.  Egypt's recent revolution has caught the attention of the bureaucratic paranoid  the world over.  Already the worse of the bunch have instituted efforts to handle their populations with a tighter rein.  The noose is getting tighter and 99% of us do not even care to take notice.

Nothing is so precious until after it is gone.

I would only add that gov't is made up of people like me.

Now that should increase your paranoia.

I commented on this on another blog. If you want to see how I insulted you, go to http://heathen-hub.com/blog.php?b=897

What's interesting is how many cameras there are on the freeways and interstates around Atlanta. They go quite a ways out from Atlanta. Also the stoplight cameras, you can get a ticket even if you stop if you stop pass the stopline. As most people around here don't know what a stopline is, there are a lot of tickets.

I think if we knew how many cameras are watching us in an urban area, most of us would get very paranoid.

We aren't filmed the way the Brits are, but strolling around town in a Nixon mask could prove both comedic and useful.

..."if we are following all the rules, we should not be concerned who is watching".

Before November 2008 a guy at work said that same thing whenever "National Security" issues were brought up. As you might can guess his 180 degree turn to extreme fear over the government taking his civil liberties came after election day.

I try my best not to laugh in his face.

Egypt's recent revolution has caught the attention of the bureaucratic paranoid the world over.

Yeah, I imagine the bread and circuses here will get more elaborate, don't want the evaporating middle class to get concerned.

Of course you're right. I rather like Randal's idea but masks are so damned hot in the summer.