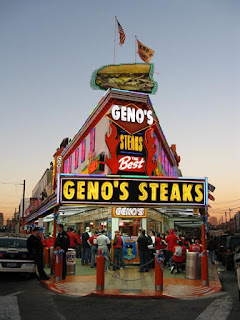 I'm heading to Philadelphia in a few hours.  My nephew is getting married tomorrow and would like my wife and I to be there.  It is to be a quick trip.  One day to get there, one day to celebrate the nuptials, and one day to get back.  Minimal interruption of the lifestyle I have surrounded myself with these past 30 years.  Unless of course one adds in the hours spent chasing new duds, getting a haircut out of season, and anguishing over which bag will hold it all.  Then there is the time spent at the vet as Stub was checked out and ok'd for her weekend at Bowser's Canine Retreat in Lebanon, a town nearby.  Then hauling her quivering ass to the retreat and filling out more forms than I would face when taking out a car loan.  Of course we have to take into consideration the extra time I spent fine tuning the snow removal so the drive and emergency exits at the bike shop and at home were free and clear of snow.  All told I bet I can add an extra 24 hours to this trip in preemptive prep.

But in less than 72 hours I should be back at home lounging on the couch with remote in hand deciding if I want to watch the Super Bowl.  Life will get back to normal, whatever that is.

I have mixed feelings about Philadelphia.  As a truck driver cutting my teeth driving out of Baltimore, I had many runs to the City of Brotherly Love.  With the exception of my trips with bands to the Spectrum, my pick ups and deliveries there were always harder than they needed to be.  It seemed every worker bee in that town I dealt with had some kind of chip on their shoulder.  A union chip when I wasn't union, a non-union chip when I was union, and cops who were not that understanding of the difficulties of delivering furniture off crowded streets to 4th floor walk ups.

I used to attend a national bike show there back in the 1990s.  We would stay at the Ho-Jos that was located almost under the Ben Franklin bridge.  The Expo was only an eight block ride on our bikes from the Hotel.  On one trip when I was out doing some urban assault surfing, a young man all duded up in the latest gangsta style reached out from a pedestrian crowded corner and shoved me into the path of the traffic coming up on my back door.   On that same trip, my partner at the time and I were leaving a small bistro after a sumptuous Philly breakfast and from across the street a man came screaming and staggering at us.  He was wielding a very large knife.  I can remember just standing there watching him close in on us.  I couldn't move or maybe wouldn't move.  Thankfully his synapses clicked in.  He changed direction and staggered back across the street still screaming and wielding the knife.  No one on the street seemed to even notice or care.

I was hanging out at the city hall around lunchtime on a weekday once.  Propped up against a building with busy power tied pedestrians rushing by was an homeless fellow with no legs.  His zipper was down and he was pissing on the sidewalk.  One well dressed lady walked by and carefully stepping over the rivulet of piss, gave him a dirty look.  Other than that he was ignored.

To be fair to Philadelphia, I have had my share of good times there also.  Drinking with strangers, sharing a joint with the guys at various loading docks, catching the many tourist sites.  Philadelphia always leaves an impression.  It is always a crap shoot what kind of impression is left when I finally leave Philly in the rear view.

getting a haircut out of season
I get a haircut(usually all of them) in the spring and again in the fall whether I need one or not.

Philadelphia is where I first saw a homeless person sleeping on a steam grate.

Well, mark that off my places to visit list. Maine, Yes, Philly, no.

Unless of course one adds in the hours spent chasing new duds...

If you do remember the freaking tags. Bought a new sports coat for the cruise and the night I had to use it I was at the close of the formal dinner when I noticed two damn tags hanging from the underside of the right sleeve.

Seeing them dangling I popped off a few non-Emily Post words at the table.

Thanks for the very kind comments about that story I wrote. Meant to drop by earlier but got sidelined several times.

Did anyone ever boo you?

As W.C. Fields once said: "I'd rather be here than Philadelphia."

I never cared much for Philly steaks. But I have a cousin who lives there so I guess sooner or later I will visit. Have a good trip.

Philadelphia, been there, done that, fuck it.

Philly's okay, just don't try and visit anyone near the city if you have to drive. Taxi!

I never drove to Philadelphia but taking the train there to visit friends was always entertaining. It's a tough city but most on the east coast are. Once we moved to Portland we called it the Mild West.