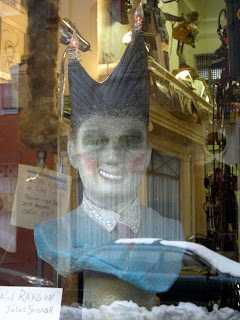 On my recent whirlwind trip to Philadelphia I took several walks.  My focus for these walks was:

~ A - To get out of the hotel room even though it was raining.

~ B - Take pictures of things, people, and more things on my walk.

A few blocks from The Rittenhouse Hotel on Locust street one of my strolls took me by a nondescript hair cutting joint stuck in the middle of a block of Philly rowhouses.  The first thing I noticed was the clutter of hairy objects hanging on walls and in the window.  I stopped and looked in.  Then I saw it.  A bust of Ronald Reagan with lights on the tips of his pompadour.  The handwritten sign next to it - "Ronald Raygun - Julius Scissor".   Since I am the ultimate anti-Reagan fan, I took out my camera and took a picture.  A slightly crazed looking fellow who appeared to be about my age looked out the window at me.  I smiled, pointed at the Ronnie bust and gave him a big thumb's up.  He smiled back and I continued my stroll.

Little did I know I had just had a close encounter with a local celebrity.  I would not know this until this morning when I decided to find a better image of the Raygun bust than the piss poor one I took through the glass.  Julius Scissor has been cutting hair famously in Philadelphia since the early 1970s.  Rated the best hair cutter in town for ten straight years, he was disqualified from the competition to "give others a chance".

To be honest, I am not much of a hair guy.  Hair doos come and go and I don't even notice.  Hair is just something that is either in my way or it is not.  Hair is there to keep my hat from chaffing the skin on my noggin.  So the fact that Julius is a famous haircutter is maybe interesting, but it is his art that catches my attention.  One of his favorite mediums is .......yeah, that's right - hair.  He has done some very odd things with hair.  Make me chuckle things.  And that's okay.  Art is about creating a response, good, bad, and even comedic.  You go Julius, your bust of Ronnie was a real treat.
Posted by MRMacrum at 7:13 AM

I liked that essay a great deal and I have seen that storefront when I was in Philly too!

I have always preferred the "K.I.S.S." approach to hair. Which when explained, means to simply let it grow where it grows, and try to not worry about where it may no longer be growing.

For me, one of the seemingly oddest "hair" issues that are with us concerns men and beards and moustaches. While today, there is much more flexibility and acceptance of facial hair styles in all forms, before the 1960s, to wear a beard or moustache was considered horrid. I just do not understand why. AND, I still really do not understand why a sizable percentage of men will willingly shave every day to remove something that is supposed to grow there? How did that idea ever start? It seems as ludicrous and foolish as peeling layers of skin off your body (which shaving can do as well).

Well, there you go again. I never knew Ronnie, after a hard day of lowering the standard in awful pretzeldenting, moonlighted as a rockabilly cat.

[swoon] Even if it's just a bust of Him, He will brighten up your home. Every day will be Morning in America.

Great find. It's always a treat to find a public anti-Reagan display.

Gave up the fight against receding hairlines and have been shaving / buzzing my head for the last five years. I'd still drop in on Julius and see if he'd give me a "scro-tee".

Pipe thinks that everything is an essay instead of just communication, hahahaha

I was going to suggest you should have gotten your hair cut while your were there until I checked out the link and his prices. $75 for a haircut? Fat chance.