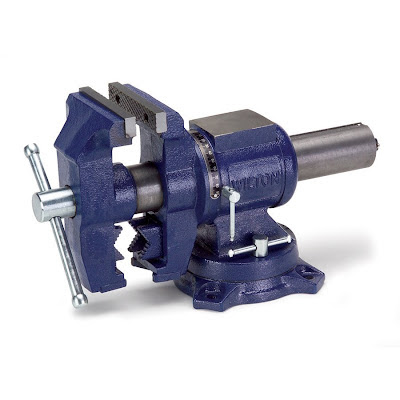 I know it has been only 24 hours. And I know two posts in a row regarding vises is most likely two posts too many. But I just had to share.

Yesterday I don't think I really relayed just how important a vise is to my operation down to the bike shop. How when you need a good vise, there is absolutely nothing Man has made that will be a workable substitute.

One of the most frustrating problems that comes into my shop is a bike with a frozen seat post. Posts that did not have the proper lubricating love when they were new and fresh. After 10 years of being inserted dry into the seat tube, they have obstinately welded themselves inside the bike. Stuck forever. This is a common problem. Enough has been written about this to fill at least a good sized pamphlet I am sure.

Every bike shop has their horror stories about the one post that beat them or nearly beat them. I thought I had finally met mine. Before when all efforts failed, I would take the bike frame to my local machine shop down the hill from Wasco. They would insert the resisting post into a 40 ton hydraulic press and with a few twist back and forth, the posts always freed themselves. They would charge $10 or $15 bucks and I would have my problem solved. Problem is, they closed up 10 years ago. Guess they couldn't compete with progress. I was on my own. 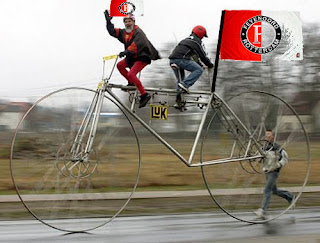 Enter - the Burley Tandem. Some folks were moving away. They swung by before they left and dropped off their Burley Tandem for me to sell. Shipping them a check was going to be easier than shipping a two seated bicycle. I thought this was great. A nice tandem to have around for test rides and maybe make a little jingle on it. I knew it would not sell quickly. Springvale is not a biking mecca. And most folks who ride seriously, ride to get "alone" time in. A two seat bicycle just seems to be defeating that purpose.

I go through all the used and consignment bikes that come through my shop before I put them on the floor. The check over and tweaking on the blue Burley is going fine until.......I try to move the Captain's seat down for the test ride. Stuck. Not gently stuck where a firm twisting motion and some sweat would free it up. Glued, welded, permanently implanted. Use any term I wanted, that seat post was not moving.

I quickly used up all the tricks I have learned over the years. Pipe wrenches with cheater bars, Impregnating the area with penetrating oils of every kind and description, and yes, even the vise. The old vise. The vise I broke when I finally over tightened it around the post one time too many. Snap! Go get a new vise. This one, the Burley just laughs at. "Ha, ha, ha". In disgust I hung the tandem frame out back and walked away.

That was last year. A bike I do not own and is stripped down to the frame hung unusable for 9 months in a dark storeroom. The owner was sympathetic and not in a hurry for his money. Better hanging in my shop than hanging in his garage in Oregon. He said he had confidence I would figure it out.

I am glad he had some confidence. I surely didn't. I was beginning to believe I had finally met my match. Found the one seat post in a career of seat posts that was going to be a permanent black mark on my seat post removing record. Up to this point, I had always prevailed.

Then I found the Wilton Multi-purpose 5" vise at Loews. I bolted it down yesterday after removing that useless 6" poser of a vise. And the first thing I clamped into it was..........you guessed it, the post of that damn Burley Tandem. I had Jim on one end and -Jim on the other. They began twisting it back and forth. I was in the middle with a 2x4 strategically placed to keep upward pressure on it. 30 seconds later, pop! And an excellent used tandem worth at least $600 is now ready to be re-assembled and put on the floor.

So if you are looking for a vise with balls, check out the Wilton 5" Multi-Purpose Vise with the swivel head. It was up to a task that previously broke the will of some vises that were supposed to be bigger and badder.
Posted by MRMacrum at 4:22 AM

I had a really burly vise that sure enough snapped in two when I cranked down on the handle. I can definitely relate to the post. Oh, and the money you made for yourself, or possibility of a sale is very good.
I think you asked about my pictures? If you did, then the answer is yes, and the floats don't have wheels.

Had a similar problem a while back. We were drilling cores for conduit. A two inch bit got stuck in the floor. We tried for a couple of hours to get it out. Even the big boss couldn't budge it. I think they finally cut it off at floor level and filled it in.
Hill billy those are the strangest photos I've seen in a while.

Can a man have to many vises?? Well maybe Dorian Grey----(somehow I lost you from my blog List, but got ya back now----can ya feel the love?)

So if you are looking for a vise with balls, check out the Wilton 5" Multi-Purpose Vise with the swivel head.

Your point is taken, but isn't there some sort of rule or convention against using the words "balls" and "vise" in the same sentence?

That is a very nice vice, nicer than my two vices. But hey, to make up for it I have a metal lathe that comes in damn handy at times.

Like when I made a jack shaft for an interesting 35 speed three wheel recumbent that I made about seven years ago.

And of course once in a while I turn a toothpick cup on it.

Come to think of it, I may have another vice in storage here.