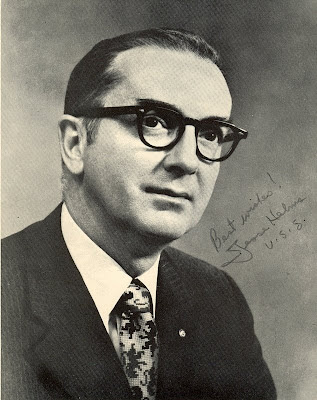 Senator Jesse Helms died Friday of natural causes. (Natural Causes? Just what the Hell are "Natural Causes"? Some sort of catch all category when a definitive reason cannot be found. The vague term certainly doesn't reinforce any warm and fuzzy feeling I might still harbor for the medical profession.)

Anyway, the ex-Senator from North Carolina has passed. He was 86. A true champion of the far right conservative causes.

I did my best to come up with something nice to say about Senator Helms. He never backed down. He tirelessly stuck to his guns for 3 decades. His nickname was honestly earned. But this is where I have to stop.

As Mr Helms and I always seemed to be on opposite sides of most issues, I can only say I admired and respected him for his tenacity and in your face ways. I just wish his efforts had not been so counter productive.

RIP Jesse Helms. I respected you even though I did not like your politics.
Posted by MRMacrum at 4:39 AM

You are far more generous than I could be. I took marked delight in the fact that in his later years he suffered from dementia and was placed in a residential care facility (read: "home"). I only hope he finally understood what it is to be vulnerable, to rely on others for help, to need protection and nurturing. I know no one who mourns his passing.

To paraphrase Bette Davis when she commented on the recent death of Joan Crawford:

They say you should always speak good of the dead. Jesse's dead. Good.

I wish more people could be this kind. Respect the man, hate the opinions. But, I really do have to agree with Dawn here. Intolerance frosts my rear end, and he was about intolerant as they came.

yep. i too wish i could be gracious and kind about jesse's death. but his intolerance was very, very personal for me, and i can't help but feel the world is just a teeny bit better place to live in without him.

I agree Mrmacrum----the man was tenacious in his beliefs, and the people in his state returned him to office again and again to represent them. Unfortunately, he will be known for his racial bias, and not the other 95% of his political positions. Just like Senator Kennedy will always be remember for his cowardly act leaving the girl to drown.

Just saw,Crummy, where we both were posting RIP Helms just about the same time early this morning .... but you are far too kind to this vile bigoted sob.

A bad guy returned to office over and over by ignorant people. Good riddance.