Thoughts on Sparrows and Cameras 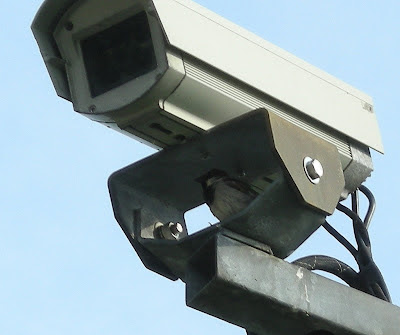 On our recent trip to North Carolina, we stopped at numerous rest areas along the I-95 corridor. At one I chose to hang out at the truck while Bobbi ran in. Above the sound of thousands of vehicles rushing by at 65, the constant chirping of what I thought was more than a few birds could be heard. With no trees or bushes near to hide the birds, I could not understand where the sound could be coming from. All the birds scavenging near the vehicles were busy and not mouthing off. They had morsels to find.

It took me a few minutes, but I finally located the source of the chirps. Parked under one of the now commonplace video monitors, I noticed the little sparrow hanging out just below the camera. It was in a constant state of agitation. Even as it flew down to a crowd of it's buddies gathered around what must have been a real find, it kept chirping. It would hang around the group hopping this way and that for a few moments all the while keeping up a constant banter. It would fly back to it's spot under the camera still yammering and chirping. It never let up the whole time we were at this rest area. The fact that it was noticeable over the roar of the nearby traffic meant it had to be shouting or the sparrow equivalent of shouting.

Certainly taking a picture of this sparrow has something to do with me remembering the encounter. But long before I downloaded the picture from my camera, I found myself thinking about it. When the conversation dwindles on a long road trip, we often have only our thoughts to keep us company. And I thought about that damn sparrow. Odd, the things that catch hold up there in my cranial void.

Various thoughts and considerations floated in and floated out. Some dealing with the bird and some dealing with the camera it chose to hang out under. Why was it chirping? What had I missed prior to our entry into it's world? Or was it just a sparrow not working with a full deck? And what of the camera? It's very presence indicates a resignation of sorts that human behaviour needs to be monitored. Why is that?

The idea that Nature will always look for ways to continue it's march no matter what came to mind. The concrete, brick and steel environment these birds lived in was not an intrusion to them, but an attraction. The rest area offered a place to find food and in many cases a home. Yet in building the rest area and the road that goes with it, many other creatures were put out and their world turned inside out. The feel good thing to do I guess is feel for the evicted creatures and not consider the benefits given to other creatures. I know Man's insistence on paving as much of his world as possible is not a good thing for us in the long haul, but I also know that no matter what we do, the planet will survive. It will outlast us. Maybe the sparrow was telling me this. "We will outlast you".

When video surveillance came on the scene, like many I found the idea deplorable. I still do, but now I ignore it for the most part. I am no longer surprised to find cameras almost everywhere I go. The serious camera at that rest area was no exception. But with miles to go before I could stop, I chewed on the idea of cameras, big brother, and the failings of human nature.

On the surface, a camera on every corner may seem a good idea. They are placed out there so that we may travel, eat, bank, and co-exist in peace. That is the stated intention anyway. What they end up being ultimately may be something entirely different. We are supposed to feel secure when in camera range. Like having someone watch as we get mugged and robbed is somehow better than having no one see the incident. I was mugged on camera in NYC at 3:30 AM behind a Burger King once. Having it on camera was of no use to me as I was still out the $20 bucks the guy stole and as far as I know, he was never caught.

So, if cameras pasted up everywhere do not make me feel safe, just what does their presence do for me. Not much. I find their presence a sad comment on what our society thinks of us. That we must be monitored at all times to make sure we toe some arbitrary line thought up by others. They do not stop the criminals, and more often than not, do not help after a crime is committed. But for the 99% of us who do no crime, they are constant reminders that we are not trusted.
Posted by MRMacrum at 6:21 AM

Caught on tape ... I think it's a good thing they have these. Maybe it will be able to help someone one day.

Well said Crum, I don't like 'em either. We kept seeing signs as we drove through Virginia that read, "Speed limit enforced by AIRCRAFT." I though that was pretty disturbing, too. But the "big brother" aspect of the video cameras bothers me more.

We have cameras now on most of our busy street intersections, to take pictures in synch with the lights to catch people running lights, get a pic of the car license, mail the owner the ticket, collect money and keep on moving---in this fashion the state doesn't have to hire another policeman, pay all that salary and fringe benifits, yet the buroughcrats and paper pushers are secure in they're places at the public trough---YOUR tax dollars at work.

We would all be amazed at how many of these don't work. For instance, I do telephone work, and at one of the local big box stores. I had to wander around the back rooms and alleys tracing wiring. I came upon an empty security room with all the monitors off and dusty. No hardware in the recorders and the evidence showed there had not been anyone working in this room for years.

But like you said, even if there is a recording. Looking at the tape two days after the incident doesn't do much for the victim.

There's much merit, in my opinion, to our emerging Brave New Order .... where community, identity, stability are paramount.

God bless America. And feelies for all.

This is such a wonderful useful resource that you are providing and you give it absent free of charge. I love seeing web sites that understand the value of providing a quality useful resource for free. It?s the old what goes around comes around program.

You completed some good points there. I did a search on the theme and found the majority of persons will have the same opinion with your blog..

Lovely sharp post. Never thought that it was this easy. Extolment to you!.