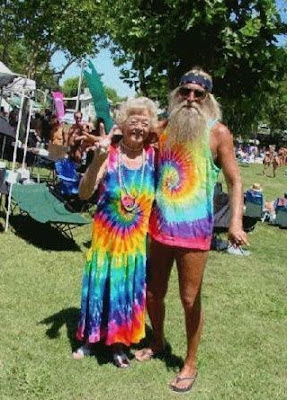 On one of my image quests in Photobucket a year or so ago, I came across this great picture. It did not fit with the post or thought I was trying to reinforce visually, but I liked it. So I saved it. Over the ensuing year as I cruised my album, I would stop for a moment and gaze upon this vision of my past come to pass.

Differing circumstances of different times stirred up new memories and considerations each time I looked at it. But no matter what, this picture always made me smile. There is something wonderfully comical about growing old. And these folks are wonderfully embracing the comedy.

An embarrassment maybe to their Gen-X offspring, but I can tell, this duo does not care. They began to do their own thing back in the 60s and never let up. Dressed in their best party duds and after splitting a blunt to get in the mood, they mingled at some rehash of the past in some park with a thousand other aging hippies. An obviously nice warm sunny day meant Pop there could go barefoot if he wanted to. But like me, he has found barefoot not to be the pleasure it once was. So flip flops on his feet give them ole dogs the room they love and him the protection for the tired abused feet that happen after 60 years on the planet. Still uninhibited after all these years. Cool.

Critics of every age will look at this photo, tsk tsk, shake their heads, say something about making spectacles, embarrassments, and/or the 60s are over dude. Harshest judgements will likely be passed down from folks their age and mine. Seems as we get older, appearances mean more or are taken more seriously. I am not sure why the butt plug of propriety becomes more firmly engaged instead of less as we age.

After gathering a pile of years chock full of experiences good and bad, I would think the reins would loosen. I know now myself that most of Life is nothing but a great comedy. Especially this Kodak moment now preserved for as long as the Internet exists. So when I see folks being what they want to be instead of what other folks think they should be, I tip my hat and smile.
Posted by MRMacrum at 4:25 AM

Mr. Macrum, this is now one of my favorite posts by you, ever. I smiled, wide, from beginning to end.

I remember most of the 6o's and yeah twas a fun era----the pic you posted pretty much sums it up---that was then, today the game is all serious acting---and driven by the Me-Me generation. who I think are a lot more laughable than the 60's people.

I was born in 69 so I don't remember the 60's, but this couple certainly look to be having fun. Good for them.

At first glance, I thought the dude was YOU. When I was young, I was insecure no matter what I wore. Now, I'm not insecure....until I accidentally catch a glimpse of myself in a store mirror. That happened today, as a matter of fact. I was walking through a department store, secure in my belief that I was socially acceptable. Then.....*gasp* Is that ME!? I looked like I'd lost my trailer and both tires! Twenty minutes later, I'm in my car, in the parking lot, pulling off my T-shirt and putting on the new, socially acceptable shirt I'd bought. And I thought: "only a "child of the 60's would be stripping down in a parking lot"