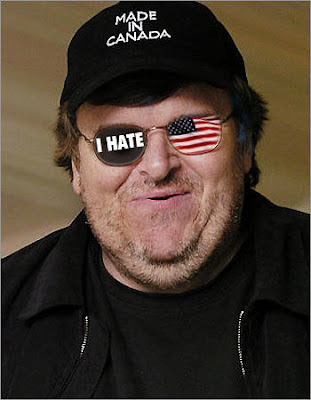 Among other things, I was called an "America Hater" the other day on a political forum I made the mistake of re-visiting after a prolonged absence. 10 plus years of abuse on forums and newsgroups have made me immune to these kind of troll like taunts. I only chuckle now at the lack of imagination shown by pulling these tired old insults out of that tired old bag of political discussion tricks.

But once again, something someone said got me thinking in a new direction. I thought about what kind of person would seriously consider this statement as representing my view of America. What kind of person would be so intolerant and stupid as to base their opinion of me on one view stated on a forum with no other knowledge about me. Unfortunately, there are many stupid and intolerant people out there on both sides of the political fence. And they are all way too eager to rush to judgement without even the slightest information to go on.

Many people are intent on forcing their idea of what America is or should be on others. They get on their high horses and spout off about what they think made America great and what made it great did not include me. I better get with their program or I am an America Hater, a pinko, or gasp - a liberal. To be fair, the other side does it also. If I even hint at being against some form of PC ness or voice an opinion that varies from the left wing sweetheart causes, I become a fascist, a lock step neo clown who is only in it for myself. Oh, and even some of them will pull out the "America Hater" tag now and again.

Seems no matter which way I turn, according to some I hate America. This is odd. If true, you would think I would have figured it out after 56 years on the planet. I am not the brightest star in the Galaxy, but I know whether or not I hate America. And so far I know I don't.

Okay. So now I have established that I do love my country. You may ask so what's your point?

My point goes something like this - Anyone who would call another American an "America Hater" is lower than the insult they hurled in the first place. They are proving they are "American Haters". People who hold their fellow citizens in low regard just for having a different take. They make snap judgements based not on the rights spelled out in the Constitution, but some arbitrary wish list of rights they have secreted away in some party platform or fringe group list of rules and bylaws. If anyone is un-American, it is these folks who would consider the differences between us to be unpatriotic instead of celebrating the fact that we are allowed to have those differences as a right of being a citizen. By using terms like "America Hater", they are inferring that given the opportunity they would gladly usurp the Constitution and throw our sorry butts out or in some prison just for speaking our minds. If that is not hating America, I do not know what is.

So to all you flounders out there who would scold me for not wearing a flag pin, having magnets on my car or calling a negro a black instead of an African American, I say you folks need to get a grip. You also need to re-think what America is really about. It is not here to meet your idea of what it should be. It is here to be what it should be for all of us. If you have no room for differences then maybe you should be the one to leave, not me.
Posted by MRMacrum at 9:40 AM

I agree with your overall point. What I hate is the angry words about this or that, always blaming "Them" or yeah "They are the problem"---and when I hear these broad brushed remearks, I almost invariably ask the speaker, "Ahh excuse me but explain to me who you mean when you say "They" whose "They'? I tend to ignore as worthless those people who can't be specific with their facts and with names---and hide behind vague terms, like "them", "those kind",or worse castigate entire groups, Muslims, Mexicans,blacks,irish,poles,democrats, republicans, etc, etc.

I have been the subject of abuse on forums. When ever you have a strong opinion that different from the norm you are going to be subject to abuse.

Your post really made me think today - thank you.

In recent years (like the last three and a half) I have been seriously considering a move to Canada. At the caucus this year, I got up and said so, and said that what happens in November will go a long way toward influencing my decision.

I love my country, but I fear my government and some of my countrymen. What I have seen in the past few years is really scary. I studied history a lot in college, and much of what I see happening in my country has happened before, somewhere far away. Like in the 1930s. In Germany. The nationalism. The "you're with us or against us" mentality. Spying on citizens. Encouraging citizens to report suspicious behavior. Prisoners being held without trial. Torture. And I am scared.

I had just this conversation one day last summer with an older couple in the local library. I had been ranting to the librarians about how I planned to move to Canada "before they put me on a cattle car for North Dakota." The elderly woman's head snapped around and her eyes were sharp with accusation.

I explained my thinking and my observations and my fears as a progressive person, a lesbian, and a writer. Her eyes never left mine, and they never blinked. Finally, she nodded in a way that seemed both emphatic and heavy, and with a thick accent said "I vas there. You are right."

I will never forget that moment. Yes, I love my country, but I reserve the right to save me and mine from its agents if I need to.

I vaguely recall, the discomfort of your basic bee sting----its not pleasant but its not mind numbing either. Unfortunately I am allergic to Bee Stings. On the Last occassion (I was 11yo), got stung while swimming at the local cement pond---within 30 minutes I was covered in watery blisters all over my body and semi-consciouse by the time I was unloaded from the ambulance at the local hospital. The doc gave me somekind of shot, I survived, but he told me and my parents that my reaction to the bee sting was so high, that he refused to even consider giving me allergy de-toxification shots ----and so today , outside, I kinda avoid bees if possible, and if one comes near---this boy turns into one stiff statue, til bee gets bored and goes away. I don't even want to think about what a hornet or a wasp might do for me----nice pics, you must have one hell of good camera.

Name calling serves no purpose. My own sarcastic idea for flag pins and candidates is this: the candidate wears a different flag pin each day and quizzes the press about it. Let's see: the Betsy Ross Special, a flag ribbon, a 48-star edition...the possibilities are endless. Just don't tread on me or myfirst amendment rights!