This is Going to Sting a Bit x Two 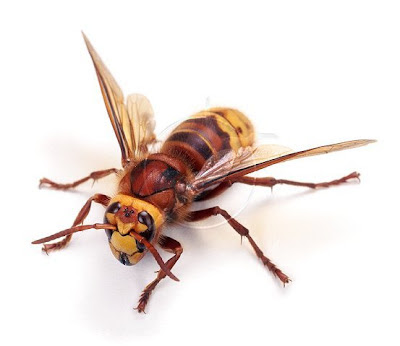 It has been several years since I have been stung by a bee, hornet, or wasp. At least that long because I cannot even recall the last time it happened. Other than hurting like Hell, a bee sting usually has no lasting effect on me. In my past doing the stupid things kids do I have been involved in many multi-sting incidents and been just fine after the initial pain dissipated. I usually would prefer a bee sting to a Horse or Deer Fly bite. Now those bastards hurt. And they are relentless. The mania they create in me every year is a story onto itself.

This lack of fear of all things bee like has enabled me to peacefully co-exist with them just fine. Even after they take their pound of flesh, I just blow it off as part of that wonderful outdoor experience. That is until this week.

Monday, I'm minding my own business trimming up some bushes in the front dooryard. Got the fancy Black and Decker electrified hedge trimmers going full bore. Suddenly two smallish hornets land on my left hand, both crowded on the second knuckle. In the instant I saw them, it looked like one was trying to elbow the other one out for the best spot to inject fire. Before I can shake them, BAM BAM, a double whammy of pain that definitely got my attention. Then they casually flew off while I cussed and fumed shaking my hand while almost dropping that fancy hedge trimmer on my foot.

This story would not even be worth mentioning if not for the odd aftermath. My knuckles swelled for an hour or so and then went back to normal. Pain was gone and I went back to whistling while I worked. Two days later I woke up and the top of my hand looked like the front of a catcher's mitt. Kinda freaked me out. No pain, but it looked awful. That has never happened before. As I write this 5 days later, the left hand still looks a bit odd and my second finger feels like it is in a tight but invisible bandage. And my feet tingle and itch. They have been since that second day. Are the two related? The feet and the sting? I ponder this every time I want to take some 80 grit sandpaper to the bottom of my feet. Just enough itch to slowly drive me bonkers as I cruise through my day. 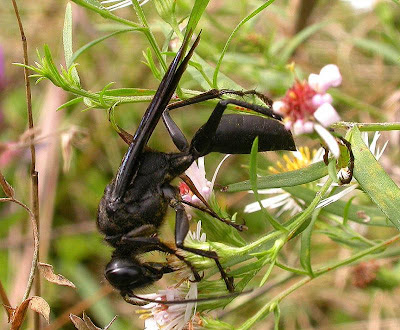 And then today I decide to stop while cycling home from the shop. There was a small open area of woods that some loggers had cut out to use as a landing to load logs a few years back. Trees had not really begun their comeback, but some nice wildflowers had. I decided to take some pictures.

Again within a week, I am minding my own business when my right ring finger gets nailed by one of these little beauties to the right. Now I have both hands not up to full capacity and I am beginning to nurture a complex about my relationship with the insects in my area. This Black wasp hurt more than the double hornet sting 5 days ago. Hurt so bad I wondered who in the Hell thought the word "sting" was a strong enough word to cover what this big bastard did to my hand. The word "sting" is a word the doctor uses just before he does something painful to my body. What that black wasp did was something more. Something deeper. Something very excruciating. I will have no problem remembering this one.

It has been a couple of hours now since the incident. Oddly, once again the swelling has gone down to almost normal. And my feet still itch. Do they itch more? The hypochondriac in me says "Yeah dude, your feet itch more fer sher".

The sensible Mike and down to Earth Mike says, "Nah brah, it's a fig newton of your imagination".

And the Mike who deals with the real life in front of him says, "Dudes, shut the Hell up. You both are driving me whacko."

So here I sit with busted mitts, trying to understand and break down the awesome idea of chance, luck of the draw, and how coincidences packed too closely together can give someone a severe case of paranoia. I will definitely not take my relationship with bees, wasps, and hornets for granted again for quite awhile.

Some of the photos I paid for with my flesh 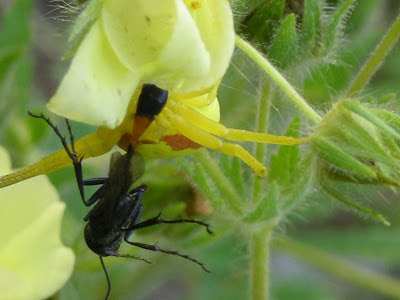 What is cool is I may have some satisfaction afterall. This first picture is of a good sized stylish spider sucking the life juices out of the type of wasp that nailed me. This picture was taken not 15 feet away from where I was stung. When I took this I did not identifiy the insect being sucked dry. I was after a shot of that spider wearing the cool duds. 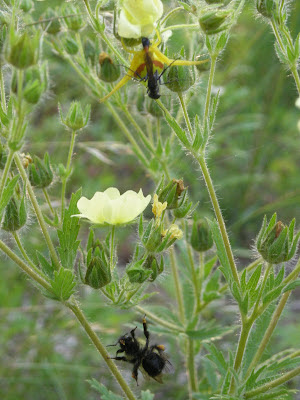 Apparently this bad ass spider favors bugs of the bee/wasp variety. Note the bumbly bee hanging drained at the bottom. I found two more carcasses on the ground. Given my current attitude towards wasps, this is one more reason to like spiders. 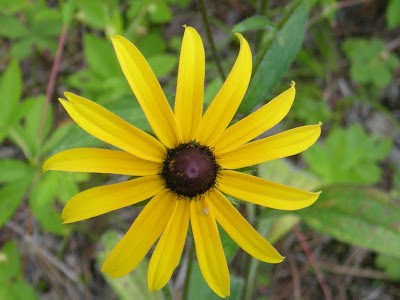 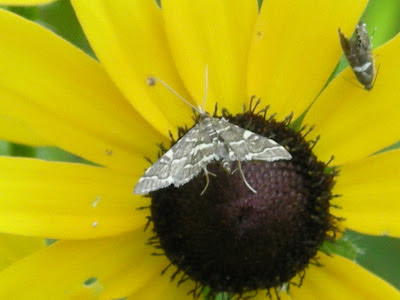 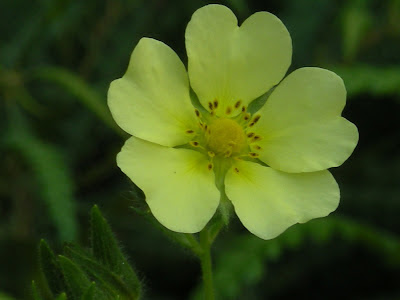 Dude, I hope you're sucking down Benadryl. That sounds like allergic reactions. Two stings that close together, followed by another, is throwing your system haywire. Your hands doing better?

Here is a solution to your stinging problem!

With the beginning of summer comes the blooming of trees, gardens and flowers, which in turn attracts bees and wasps of all kinds. But that is not the end of the worry of a sting. Many stings take place during the fall months. Reason being, bees and wasps are cold blooded insects and they linger around people in order to absorb the body heat of humans, therefore increasing the chances of getting stung.

Last week, I witnessed a 4 year old girl with her hand and forearm swollen to her elbow, from a wasp sting that she received to her fingertip the day before. The sight of her hand and arm brought tears to my eyes because I knew that if she had had Baker's Venom Cleanser available when see was stung, none of her discomfort would have elevated to that extreme point of swelling and discomfort.

Our web site http://www.BeeStingCure.com has under gone some new additions worth taking a look at. Old news commentary video footage from 1988 has been added to http://www.YouTube.com/BeeStingCure and the link is available at our site.

don't you dare laugh---having a senior moment here---okay you can snicker some------I posted my original comment to this post in error to the post preceding it. I then tried to cut and paste it here to the correct post---managed to somehow paste it about three times ---so went to delete the last two redundant entries, ended up deleting the entire post---and so your now getting this comment, and I don't wanna talk about it anymore---nice pics

GaryJay
GJG said...
I vaguely recall, the discomfort of your basic bee sting----its not pleasant but its not mind numbing either. Unfortunately I am allergic to Bee Stings. On the Last occassion (I was 11yo), got stung while swimming at the local cement pond---within 30 minutes I was covered in watery blisters all over my body and semi-consciouse by the time I was unloaded from the ambulance at the local hospital. The doc gave me somekind of shot, I survived, but he told me and my parents that my reaction to the bee sting was so high, that he refused to even consider giving me allergy de-toxification shots ----and so today , outside, I kinda avoid bees if possible, and if one comes near---this boy turns into one stiff statue, til bee gets bored and goes away. I don't even want to think about what a hornet or a wasp might do for me----nice pics, you must have one hell of good camera.

gjg - Can I snicker with my hand over my mouth? I cannot tell you how many times I have done the same thing.

My camera is nothing special. A midlevel of the low end Nikon. Tiny thing that fits comfortably in a pouch on my belt or in my pocket. It seems to do well for close up stuff. Not so good when the distance is greater than 25 feet or so. The trick I learned is to use it like I was shooting a gun. Be calm, take a breath, hold that breath while keeping the camera as still as possible. Then press firmly like squeezing a trigger. Then breathe.

Love the moth on the black-eyed Susan! And I'm with your other commenters: try Beneadryl or the generic equivalent. A little antihistamine right away can help prevent your body from overreacting to the venom.

I was going to suggest Benadryl as well. The feet itching is weird...my husband had that once as a bad reaction to a medication he was taking, and they said he was definitely allergic. I'm thinking that you've developed an allergy to these buggers as you get older. Blech.

My poor daughter got stung last year at a pool party. Some kids were teasing a bee, spraying water at it, and she tried to help it by moving it to a safer place. The bee, of course, did not understand her good intentions, and stung her. her first sting. She's so soft hearted, she felt bad because she knew that the bee would now die. Me? When I get stung, that's my solice.