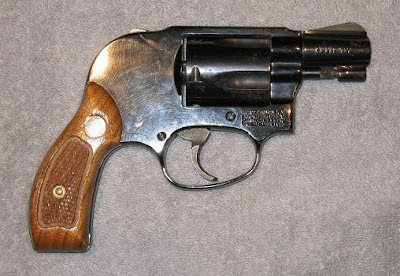 Well I guess it's settled for now. SCOTUS has spoken. With an overwhelming majority of 5 to 4, our boys in black robes have confirmed that according to the 2nd Amendment it is okay to own a gun.

What I don't understand is how this decision would have any affect on the reality of gun ownership in this country. According to Rense.com, there are 80 million gun owners in this country. From the sample population I have met over the years, not one of them would willingly give up their firearms.

This highly charged emotional issue is another perfect storm to illustrate the uselessness of laws that are doomed to fail before they get out of the gate. I have read, heard, or been telepathed that there are over 200 million firearms floating around in this country. With this many horses out of the barn already, it would be difficult to disarm these 80 million people without stomping hard on the rights of the other, what, 250 million people.

I have no opinion whether or not someone should own a gun or not. In my opinion, choosing to own a gun is like choosing to own anything. Individual perception of individual needs. If a gun helps someone make it through their day, well I guess it's okay. Personally, I have not fired a weapon or carried one in over 35 years. The instances when I was faced with possible physical harm by another would not have been made easier if I had a gun. And even though my life has not been packed with life threatening criminals, there have been moments. At least 2 times a gun or weapon was stuck in my face and once in my ear. I know in those instances, a gun would not have helped me.

I have not had a loved one die from gun shots. But I have had 2 friends (well they were drug friends) die from gun shot wounds. In both cases, they had placed themselves in the position and situation to get shot. As I also had the few times I was threatened. I lucked out. They did not. The lifestyle we were engaged in was a dangerous place. And any law for or against guns would have had no affect on our individual encounters. Laws were already being broken. A law against guns was not even on the radar.

Guns are a tool. Like any tool, how they are used dictates the outcome. A law against the tool does nothing to address the intent of the user. Murder is murder whether it is by gun, a knife, a blunt instrument, or a car. Making folks pay for the result of their tool use makes more sense than uselessly trying to preempt their actions by removing one of the tools.

A good example is the state I live in. Maine has one of the highest per capita gun ownership ratios, and regularly has one of the lowest murder rates. And of the few murders committed, guns are not the favorite tool for the job. Fists, knives and blunt instruments all hold their own against the gun. Seems Mainers don't like to waste good ammo on something they cannot eat.

Many people in this country on both sides have elevated the debate over guns to one of biblical proportions and religious fanaticism. And both seem to look at the words of the 2nd Amendment with different lenses. Both seem to think that a law, an amendment or arbitrary rule will either rid us of guns or protect our right to own them. In that laws are only strongly worded suggestions, it is up to each individual to determine what they choose for rights. We choose to go along with the rules or we don't. No matter what the law says now or will in the future, gun ownership will be a fact of American life. Guns are woven into our cultural tapestry. They are part of our national persona. Their existence is a forgone conclusion. No enforcement will change that without serious damage to the other privileges we have become accustomed to.
Posted by MRMacrum at 7:15 AM

I agree 100 percent with this opinion---and trite as it may sound its never the less true---"Guns don't kill---people do". and Like Mrmacrum points out----people who have every intention of breaking the law, are not going to worry about any other law that might get passed. Now if we could just get the police and courts to start penalizing drug USERS as much as drug sellers, we might see some progress in that area.

Great post Crummy ... and a wicked good money line, "Seems Mainers don't like to waste good ammo on something they cannot eat." Good stuff all around.

Looks like gig wants to put us all in the jail house though ....

Welp we better start locking up all the Drs. in this country because the bulk of drug abuse is from perscriptions.
To say they can't crack down on ownership... Remember when you could walk directly from the ticket counter to the gate to catch a flight? What's that part of the constitution about searches?
Warrents? Warrents? We don't need no stinking warrents.

What's wrong with allowing individual states or cities do decide for themselves if citizens should own guns.

But the Supreme court is a fickle group.

Onc court say abortion is illegal. Years later another court may come along and say just the opposite.

200 years ago the law supported slavery as an institution. Today slavery is illegal.

States and even cities already have local laws that govern themselves. Why not just let people vote on gun control, gay rights, prayer in school, etc?

"Seems Mainers don't like to waste good ammo on something they cannot eat."

Good god, I laughed out loud, all by myself at the kitchen table! Absolutely dead-on!

I think with Mainers, murder is too personal a thing than to be done with a gun. If we're going to kill you, we're going to get up close so we can see your face and you can see ours, so both parties will very clearly understand just how personal the exchange is.

I think you're so very right on every point you make here, and I confess that I had some initial concern when I saw the title. Hooo, boy! I thought. This is where the two of us will part ways. Not so at all. I am much impressed.

Laws are for people who are likely to obey them. Those who break the laws don't much care anyway. And you're right - 200,000 horses are already out of the armory.

I have to disagree with gig, though. I'd say don't jail drug users, make them work a few shifts in the morgue in New York City to see what drugs are really about. Make them work as aides in a treatment center for end-stage addicts and alcoholics for just a week or two. That would likely do more good than jail time.

gjg & dawn - I would have to side with dawn here. When laws obviously are not working and they basically are personal choice situations anyway, the Feds should stay the Hell out of it. Guns, drugs, who we marry, abortion. All these issues should be allowed to sort themselves out at the local level.

norris hall - Take the above as my vote to allow states to decide most issues for themselves. I am definitely an advocate for smaller de-centralized government wherever possible.

As to drugs and their illegality - as long as tobacco and alcohol are still legal then drug laws are nothing but a perfect example of the hypocritical nature of national policy. Make em all legal or make em all illegal. Anything in between just invites scofflaw attitude which then bleeds into the rest of our regulated activities. And if it matters, millionss more lives have been lost and or destroyed through the use of "legal tobacco and alcohol" than all the drugs combined. What a joke our drug policy is.

I agree with most of your statement, but

Just remember a "Privilege" can be taken away, a "Right" is guaranteed by birth.

tony - IMO, it is a common mistake to assume we have rights by just being born into the right circumstances. Breathing is the only "right" guaranteed at birth. Rights and privileges are all man made ideas. We have them because we gave them to ourselves. The only guarantee for any of them is our willingness to continue to offer them or our willingness to fight for them.