What Happened to Being Bored? 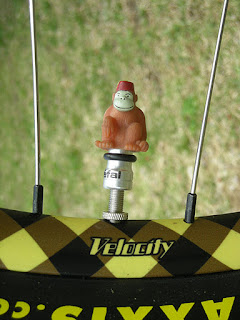 As it turns out, September, 2011 is now officially the highest grossing month of the year down at the bike shop. This is certainly good news as it helps to put me in a better position financially to weather the slack sales of winter. This is also a very odd turn of events in that September is traditionally the month the door to summer begins to close. My previous best September grossed only 25% of what I brought in this September.

What does this mean? My best months historically are April, May, June. September has never been more than a meet expenses and maybe pack a little away for October. I am a tad unsettled and mildly disturbed about this.

Being true to my nature however, I would not be happy unless I was able to find something about this month to bitch about.

For 20 years, this bike shop and the one I owned previously enjoyed or suffered a predictable flow of business over the course of a year. The season slowly winds up in late February, builds a good head of steam in March, and then settles into a dull roar for April, May and June. July is often a cruising month. Sales flatten out some, but business remains brisk. August is when the winter wind down begins. And by September, I am usually ready for a break. I got no break this September. Not one day at the shop this past month did the words,"I'm bored, would someone, anyone at least call with a wrong number or try to sell me some insurance?" No, every day in September was another high RPM day just like the previous 180 of 2011.

A man gets used to his life panning out in predictable ways. And while stepping outside of a comfort zone is one thing, being forced outside of it is a whole other matter. If this unpredictable flow of events continues, I may just have to find something other than boredom to whine about this winter. And I was so looking forward to it too.

Ain't it a bummer? Next thing you know Oct will out gross September. Any ideas why this Sept suddenly went over the top? Economy? Politics? Environment? Someone famous seen making out on a bicycle?

Perhaps people were upset and needed to "work it off." I used to jog to relieve stress. I bike also, and it has the same effect.

In trying times, people alter routines. It is human nature.

Glad to hear it seems you'll have some extra loot, and I think the previous gents have the reasons covered. The good news for you, and Mother Nature, is that with the continuing slide into economic fuckery, more folks will be pedaling.