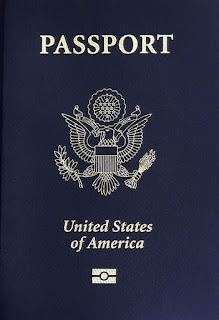 I was putzing around the Internet this evening when I came upon a teaser headline on the "Drudge Retort" - "Poll: What does GOP mean?" I found out that barely 51% of Republicans polled knew the answer. I chuckled and moved on. One site led to another and the next thing I knew I was on the Christian Science Monitor site taking a written version of the US Citizenship test given to eager immigrants wanting to become citizens in the land of the free and the home of the brave.

The test took awhile. Each question was on it's own page and well, I almost dropped it mid stream. I carried on til the end just to see if I had what it took to be a US citizen in the eyes of some bureaucrat hunkered over US facts and figures in some dusty cubicle over to Foggy Bottom.

Apparently I passed with flying colors. In order to gain a passing grade one must get 58 of the 96 questions correct. Using only my porous brain pan to find the answers I got 93 correct. One of the wrong answers I cry foul on. It was a trick question. Another one I just flat out blew. And the third, well, Not sure why I got that one wrong. I was thinking 1787, but I punched 1789.

So I could have passed the test. Does that mean anything other than I have a decent working knowledge of how our country was set up and has run since the beginning? No, not really. This test does not ensure that I am a good citizen or even a bad one. But I guess if I was a just landed immigrant, it would indicate that I have enough interest in this country to at least study for this test. A place to start.

I looked up some US statistics regarding the numbers of legal immigrants entering this country. I had made some assumptions that were not supported by the figures. I assumed that immigration was down, but lo and behold, we legally allowed 1,042,625 foreigners to move here in 2010. The World is still knocking on our door even though the mythical streets of gold turned to potholes many many years ago. I guess as bad as I sometimes think it is here, I could be someplace else and in a much worst life situation.

Which just reinforces the notion I should be grateful for what I have and not angry about what I don't have.

The World is still knocking on our door even though the mythical streets of gold turned to potholes many many years ago.

Yeah, well, those wanting to come here don't see the writing on the wall.

But we can be thankful that we lived though a golden age here. And some things will continue to be okay for many if they think out and do things right.

Hell, even in third world countries there are those that do well.

I tried. Just too much. I answered 41 of the questions.

I believe I'll wait on the citizenship test until I've had my first martini. This looks like something that's going to require sustenance. Your appreciation of living in America is the first argument I use when confronted by a sanctimonious, "self-made" jerk who refuses to acknowledge the role luck plays in your life. First thing. Something over which you have no influence or control... being born in America.

I think Randal may be onto something

I think Randal may be onto something