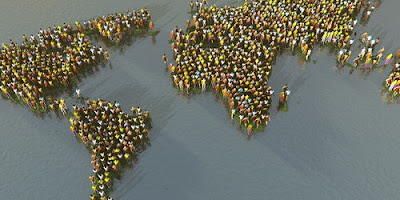 I ran across a link/story regarding the planet's dubious honor of now having 7 billion humans roaming around its surface. It is one of those interactive sites that will tell us where in the numerical order of humans inhabiting this rock one falls. According to the BBC article, I am the 2,615,064,392nd person born on this planet. When I was born in 1952, there were not even 3 billion people. Now, 59 years later, there are 7 billion of us taking up , taking over, and eating up space. The UN agency in charge of counting humans insists that by 2050, we will be dealing with 10 billion people.

Wow. 7 billion is a lot of people. 10 billion people is even more insane.

I will admit that this more than doubling of the planet's population since I was born pretty much went unnoticed by me for the most part. Oh, I knew we were crowding each other out a bit, but here in Maine, there is still plenty of room. Maine has a density of 41.3 people per square mile. Or to put it another way, every person in Maine has 15.5 acres of land around them. Or could have if we spaced everyone just so.

I am not even sure why I bothered to write about this. We all knew we have been creating humans faster than we destroy them for years. I thought it was whacked when we hit 5 billion and now that a couple more billion have been packed in, it is almost anticlimactic. So what if for every 33 deaths, 100 brats are spit out to take their place. What that means is somewhere in neighborhood of 400,000 people are born everyday while only 132,000 people die.

Regardless whether my math skills are up to the task, there is no denying we are going to stress our planet even more in the coming years. Of course, there is always that go to hope many secretly harbor and we could experience a species decimating event of some kind. A plague, a series of natural disasters, or maybe another war to end all wars. But barring that, I am afraid my daughter will have to get used to sharing more of her air and space with more people than I did.

The above link has some very sobering predictions about what Life will be like if we continue our wanton consumption. There is a crisis point coming. Or at the very least some kind of correction I am sure. Whether we instigate it or the planet does, Mankind is in for some rude awakenings in the not so distant future.

Yeah, I can remember reading years ago that there were over a billion people in China. Truly blew me away.

I read an article a year or so ago which dealt with computers and how considering the exponential growth of computers just in the last 10 years, that by the year 2050 we will have computers that can reason and function as do human beings. And the real question is, will they be human friendly, given all of our weaknesses, or will they do us in. Possibly the population explosion is moot?

It seems unreal, but then...

I can't remember where I read the article...old man brain farts at work. Sorry.

peoples just need to quit fucking..all there is to it.

Holy shit Granny...is this because the Rangers lost?

Everyone chill. Once we've dug too far, the hollow earth lizard men will rush up and take care of overpopulation right quick.

Graves, we want to be careful with the digging thing...we could end up in Chine and be inundated with all their shoddy consumer products...er, wait...nevermind.