The Decade of Odd 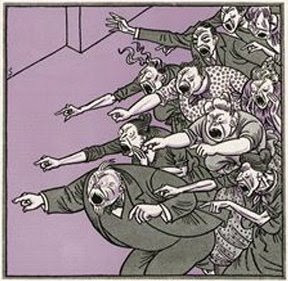 It has been an odd year, this year of our Lord, 2011. Odd for me and most likely odd for many others also. But then I should be used to odd. Life started getting seriously odd in my little world right after 9/11. Maybe it was just me, but I felt a change in this country, an unnerving if you will of this country's confidence in itself.

So with a decade of odd behind me, I should be used to it and not even bat an eye when another lunatic escapes from their fringe and makes some kind of impact on the rest of us. It is as if the fringes of our national personality have switched places with the mainstream. The average idiots like me are now not in charge. Nor are we what would be considered mainstream, but have now been expelled to the fringes. The extraordinary idiots have taken over control and now their agendas are pushing ours out of the way.

But have the whackos from our fringes really taken over? Or have we allowed the fringes within ourselves to take control? For whatever reason or reasons, have we begun to let some of our inner demons out into the real world?

Cycles. It is all about cycles. And right now is the end of one and the beginning of another. How we handle this unsettled time between the two will define where we go from here. Will reason catch back up with us? Or will we continue to beat each other senseless by forcing our personal fringes onto each other? Will this decade of odd turn into a generation of odd?

The Doomers and the Gloomers tell us this is it. It's all over in a short while. Or in the case of some, it was supposed to have happened already. But so far, the end has not happened contrary to many unfulfilled predictions in our recorded past. No matter what comes at us, somehow we have dodged the bullet. Given our historical tendency to screw up a good thing and then recover, I would say the odds are in our favor. That somehow, we will figure things out and move on into the rest of this century.

In the meantime, maybe we should all try to cut each other some slack again. It works for the most part. What doesn't work is what we are doing now. But then every society has to blow off some steam on a regular basis.

But you are NOT a free society and are getting less free all the time. The permitization of freedom of assembly and speech that Naomi Wolf wrote about is exactly the same as Putin's Russia. Political parties can be recognized they meet the rules; protesters can gather IF they meet the rules. If they don't like you you will never meet the rules. America plays at democracy. Russia doesn't play. It manages democracy.

This year of our Lord? Hey, where is that motherfucker anyway?

It hasn't been all that odd of a year for me, but it's been interesting.

So do we, well, the rich and powerful here do, the rest of us are just pawns on this chessboard.

Most people are too busy trying to survive to really pay attention to what's happening with the country. They don't realize the system is rigged against them.

It is "odd" that a handful of crazies are dictating policy in this country. We need to rein them in, but most of the politicians are not working for the people, not the 99% at any rate.

I'm with you Crumb. Frankly, I'm just tired of the BS and I'm too old to get in there and fight it. Time to focus the rest of my life on what's really important, at least to me.

If I had your attitude, Mr. Charleston, I would overdose on oreos.