Discontent in the GOP Playground 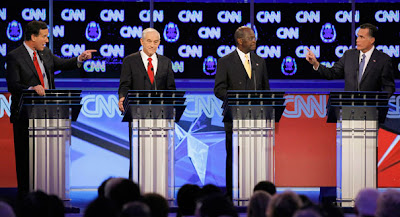 It has to be tough to be a Republican these days. The internal strife, the back biting, the lack of any leaders with a clue must be driving the few "good" Republicans bonkers. It used to be the GOP would not allow it's members to go after each other like siblings in the back seat during a long trip across country. The best the GOP has to offer are acting like, ....oh my Gawd,.....Democrats. Everyone knows Democrats are loose dogs and have no self control. The GOP was above the fray. Republicans always offered up a united front. They could disagree with each other, but only behind closed doors. Solidarity above all else.

But it has all changed. Just watch a couple of minutes of any GOP debate. Close your eyes and they sound like Democrats.......... Okay, maybe evil Democrats. The tempo and pissing on each other shoes surely is the same standard Democrats jump right into when they debate each other. It used to be Democrats wore their feelings on their sleeves and Republicans kept them in the closet. Not anymore. The GOP is now proving to be whackier than any Democrat I know of. I never thought I would see the day. I am positive my mother, her father, and any dead relative from the black Republican side of my family are turning high RPM circles in their respective graves about now.

Every day, the front runners hoping to capture the Republican privilege to go head to head against Obama open their mouths and shove not one foot, but sometimes both feet hard into their mouths. And what is even funnier, many of them have not even a glimmer of a clue they have done it. But when caught and forced to acknowledge their mistake or conflict of ideology, they weasel out by lying, claiming their words were taken out of context, or that what they meant to say was not what came out of their mouth that day. And then quickly, they spew forth a statement that completely reverses the position they had taken sometimes not even hours earlier. They are so desperate to capture the favor of their base, they will say anything and not even realize what they are doing.

This internal girl fight would be true comedy except for the fact that the GOP has lost any interest in actually helping this country out of its current situation and are focused only on defeating Obama, no matter the cost. They are acting like toddlers in the throes of the terrible twos where no matter what mom says, all they have to say is "No". And in the meantime, the rest of us pay for their self absorbed focus on defeating Obama no matter what.

The current state of the GOP illustrates perfectly what I have said all along about the leadership of both parties. The interests of the party come way before the interests of the nation. They only care about us when it comes time for them to ask us for our votes.

It's a changing world and our folitics from all parties are bullshit.

Tanya and I were talking about politics in Ukraine yesterday and the squabbles here. Very much like USA. Neither is a good example to the world. Faulty constitution is the big problem in both countries but at least they try to follow it. Somewhat.

Tanya prefers Putin, Nazarbayev and Lukashenko style "managed" democracy which I think we are likely to get here in Ukraine too. These guys just ignore their constitution.

By the way, Stalinist Russia had THE most modern, liberal, progressive constitution ever written.

Funny how different perspectives can do that, eh?