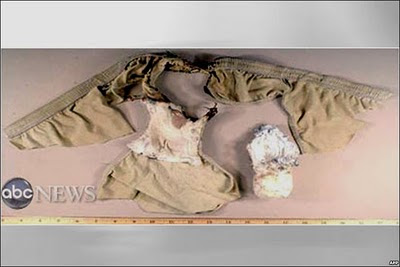 I know this is serious business - This terrorist who had a mind to set off his whitey tighties and take out another Jet here in America. And I have tried my damnedest to take it so very seriously as the terror alert aficionados would have me take it. But I am sorry, this picture of shorts packed to explode but didn't is funny. And I feel guilty about it too. What if they had exploded? Would I feel or even know the comedy that laid in wait inside this guys britches? No I most likely would be pissed off and angry all over again at an enemy that has no reason to exist than to destroy the life I have.

So as I work through this war of emotions inside, I noticed on Fox Spews this morning (Yes, I am guilty of tuning into Fox Spews on occasion. Just to be fair and balanced you know) Anyway, so I am watching the vacuous cast of Fox & Friends take on this aborted terrorist attack in the skies over Detroit. Well, they were all over it like stink on shit. In their Fair & Balanced way of course, they brought on the one expert who would offer the most objective take on this issue based on the question, "Is Al Qaeda stepping up attacks because we have a new president?" This former CIA clown immediately tee-d off on "the new president", squarely placing the blame for this attack and the recent shootings at Ft Hood on Obama Man's shoulders. According to him Obama has muzzled the worldwide efforts of the terrorist hunters. If this is the case, then why has Al Qaeda apparently moved to Yemen?

Hmm. Seems to me whatever network we have working in the background, no matter how flawed, must be doing something right if these guys are resorting to wearing bombs inside their shorts. And was not the response on the plane exactly what we would have hoped for? Passengers did not sit idle and allow this clown to complete his mission. Several jumped him.

What struck me though was during the Q&A of this talking head, Yemen was an obvious talking point that popped up. How Yemen may now be the new Al Qaeda central. Lost in, or was it just brushed over, was the fact that two of the primary Al Qaeda leaders that have emerged in Yemen were once detained at Gitmo. Their release in 2007 happened during Dubya's reign was not given more than a cursory mention. That their release to Saudi Arabia for "rehabilitation" was mentioned and focused on some but not condemned outright was interesting also. Obama is the man we should blame. Believe it.

Damn, I just love the irony of Fox Spews and their "fair and balanced" take on things.

What fries my ass about the crap surrounding current terrorist madness is this country's insistence on wasting time trying to place blame on one side of the aisle or the other. Al Qaeda does not care what party we belong to. Al Qaeda does not even care if their efforts fail. They care about terror, creating internal divisiveness and making us afraid. They are the enemy. Not the Democrats. Not the Republicans. They are. Any blame for a rise in their terrorist activities is on them and their backers. Anyone who considers Obama "soft" on terrorism should be ashamed of themselves for playing into Al Qaeda's hands so easily.
Posted by MRMacrum at 4:05 PM

I had the same reaction to the exploding underwear. I laughed my ass off, then wondered if I just cursed my next trip by air. I remember Woodie Allen in Bananas, when he somehow became a rebel leader who overthrew a government somewhere in S. America. One of his first proclamations was that everyone must wear their underwear on the outside. We will soon have to take off our shoes and drop our drawers to get on an airplane.

I've decided not to care about it all, I don't fly anywhere so if others want to blow up planes let them, it's actually a decent way of population control, to many of us monkeys on this rock anyway.

Hell, even if someone doesn't blow a plane up plenty of them still come down anyway. Like a man in aviation once said.

"We've never left one up there."

"We've never left one up there."

I am not sure if it is news overload or something else (opinions appreciated), but I have had developing in my mind and soul over the past several months a "I don't really give a damn about news in any way, shape, or form anymore." sort of mindset.

I am not proud of the above statement in any way. I used to be vehemently passionate about news and all sorts of various issues politically. I still hold views of what I feel would be the "right" choices, but there is little passion to express them and even far less interest to hear the Fox/CNN/ABC/CBS/NBC/PBS folks spew on about it in whatever fashion they choose night-after-night.

The point of this message? I do not really know if there is a point. I just find it so very odd that I don't really care about news anymore. And, I truthfully do not know why. The last issue I actually had any real passion for was a few months ago when I thought Obama would be able to actually get real health care changes (including a public option) into existance. That, unfortunately turned into a vapid pipe dream.

For truly balanced news The Economist and BBC World News websites are excellent. BBC is free and some articles on The Economist, though a subscription is about a hundred bucks. I never read or watch American news channels.

How can you pack enough explosives in your shorts to blow up a plane and get through security? Does this mean that shorts full of drugs routinely get through too?

The new security rules, if what I read is true, are a joke. I hope they only apply to planes traveling to the USA. If I can't go to the can when I need to, then MY shorts will explode

I've read a great deal about this incident on the websites of a number of news organizations (to be fair and balanced, etc.). This is not a failure of anyone at the top, so it's stupid to blame President Obama (even if I think he is too soft on terrorism). The problem is a failure within the bureaucracy, whose job it is to prevent shit like this from happening. Good for Obama for demanding a review and putting a short deadline on it. I'd love to see him kick some TSA ass on this one.

One of the things that came up in my reading yesterday is the point that putting this dude through one of those screening machines that blows the strong puff of air onto the passenger being screened might have detected the explosives. The machines are not in use everywhere, but I've seen them in Tampa, for example. But not everyone gets directed through them.

I'd personally like to see the approach they use in Israel, where they care more about who gets on a plane, rather than what gets on a plane. In other words, a semi-paralysed granny with an extra large nail clipper is allowed on and doesn't have her preening instrument confiscated. But Iqbal from Karachi with a scar from here to there, and burn marks on his hands, who behaves nervously when questioned by the security folks, is told to go to the ticket counter for a refund, because he ain't flyin'. Even if he doesn't have anything on his person.

The turrists won eight years ago. But I'm sure getting involved in Yemen can only help the situation.

Sometimes it pays to not have any loot to go anywhere.

North Country Liberal - Some things are funny no matter how serious the situation.

BBC - Your sensitivity overwhelms me.

Blog Fodder - I Check out BBC quite often. Especially when I want minimum spin.

El Cerdo Ignatius - Something tells me his political orientation means Obama man starts in the negative for you. And that's fine. You are certainly more fair in your criticisms than most folks I run into on the Right.

All in all though, whatever might be escalating, we have definitely made it more difficult for the assholes to try anything. If we expect 100% success rate in thwarting bonehead plays from away, we are living in a fool's paradise.

Randal Graves - Lack of money never stopped us before.

El Cerdo Ignatius - Something tells me his political orientation means Obama man starts in the negative for you.

Probably a fair and accurate point, but I do try - honest! - to react to what the president does as he does it, and not assume an attitude in advance. So please believe me when I say that if Obama gets a report on his desk about this security breach, and after reviewing it, fires a few people and orders the CIA to get on the stick when it comes to sharing information with TSA, I'll be cheering him on, because I think he'd be doing the right thing. As opposed to, say, doing a talking heads TV interview and accuse him of "faking a tough stance", or whatever.

You get the general idea.

As for the difficulty in achieving 100% success, I might point out that the Israelis have had 100% success on airplane flights originating in their country since 1969. Just sayin'...

BBC - Your sensitivity overwhelms me.

Because I think that if others are stupid enough to fly it isn't any sweat off my butt if they die?

Every second on this rock someone is dying, and not even when doing stupid things like flying. That's life on this rock and I'm not inclined to be a bleeding heart about every dying soul.

Not even mine. Shit happens, deal with it. Besides, at the spiritual level this is just one silly body so death isn't a concept to me in that respect.

Good post and this enter helped me alot in my college assignement. Thanks you seeking your information.