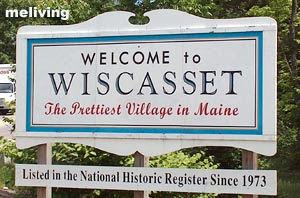 A blurb on a local news show caught my eye tonight. A woman author was being interviewed about her recent book. I have no clue what the book is called or what it is about, but it is set in Wiscasset, Maine. What caught my attention was when the host of the show asked her why she set her story in Wiscasset. I assume this woman was from away. Her answer gave me that impression.

Hmm. I have been to Wiscasset many times. I have been through Wiscasset many times. I never gave much thought about how pretty it was. Just another Coastal Town in Maine that unfortunately sandwiches the hated and deservedly maligned US Route One. Route One in the Summer is the Tourist Road from Hell at least 4 months of the years. The rest of the time it is just a pain in the ass. So in my humble opinion, Wiscasset is not anything special. But then I don't live there. I have not set a story there. I have nothing invested there other than the hours wasted in bumper to bumper traffic, all of us just trying to get through it,past it, see it in our rear view mirrors.

Yeah, the coast is pretty I guess and many of the towns sitting on the Atlantic are classic old villages with crusty lobster boats in the harbors. Old Farts in foul weather gear hang out and look cool. Low tide smells like low tides most everywhere. But the best thing I like about the towns on the coast is they keep most of the flounders from away, away from my part of Maine.

Where I live has a sizable summer population, but the folks who come here from away are usually old timer visitors. Been coming here for years. I don't have to answer dumb questions that tourists over to the Coast ask. Most folks visiting the Acton area know where they are going, where they are staying and who they need to know to make their visit trouble free. I can't remember the last time I had to say, "Ayuh, you just can't get there from here." 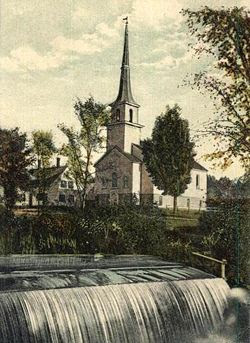 All of this reminded me of a tee shirt the Acton Trading Post sold for some years to folks from away who were va-kaying on the numerous lakes in the area. The Tee Shirt sold for $10. Silk screened on the front in an arc - " Acton, Maine" and then in a reverse arc under it - "God's Country". For some reason that Tee shirt always tickled me.

The image to the left is a post card once sold locally back in the day. This church is now known as the Covenant Baptist Church. When I played softball for them in the 1980s, it was simply the Acton Baptist Church. Regardless, this image is from around 1920. It is a view as seen from across the Maine, New Hampshire border looking over the Salmon Falls River in Milton Mills, New Hampshire. This view is now blocked by trees, but the church looks the same.

Idyllic, with classic New England looks, Acton is as nice a town as any in the state. But hardly anything special. It is no more God's Country than Wiscasset is the prettiest village in Maine. But if meaningless claims bring in more dollars, hey, I say go for it.

In case I don't post til after Xmas, please have yourself a Merry one......
Posted by MRMacrum at 7:10 PM

Email ThisBlogThis!Share to TwitterShare to FacebookShare to Pinterest
Labels: Maine

Thanks, MRMACRUM. Merry Christmas to you and yours too. Someday I would like to visit Maine. I will try not to ask dumb questions but no guarantees

I don't think I ever made it even near Acton during my time in Maine, but I recognize the image in that old post card as quintessential New England.

I did get to Calais and Eastport. I thought the coastal country was very scenic and nice. It was certainly a nice contrast to the vast rolling prairies of so much of Aroostook County, where I was stationed. The fishing village aroma does follow a person home, though. :)

Merry Christmas to you and yours as well.

Even the non-exotic is exotic to an outsider, or at least compelling for some reason. Providence, R.I. is probably nothing special (it ain't Paris or Vienna, in other words) but I'd like to visit to walk the same streets as HPL.

Do you know where I can buy a lobster?

Merry Christmas to you too Mike! I'm so glad that I had the opportunity to get to know you this year. :)

Merry Christmas to you and yours ... XX

And remember: all of Maine is God's country.

I once drove into Maine by accident. Turned around and left. Didn't want to add to the throngs of dumb tourists but I was working in New Hampshire at the time.
Funny how you can live in a place and not really see it after awhile.

Have a Merry and stay warm.

Mike, I intend to get over to your neck of the woods one day.

Merry christmas tou you and yours.

All the best, David.

Your description of coastal Maine reminds me of Cape Cod during tourist season.

UP on the Tundra there was one town that had t-shirts that said, "It's not the end of the world, but you can see it from here."