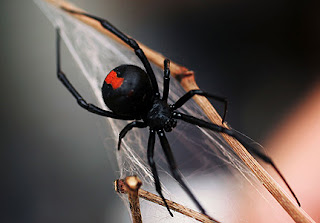 She was always threatening to punch someone in the face, but this time she meant it. Who was she fooling? At 4 foot, 11 inches and packing barely 100 pounds soaking wet, certainly not the assholes she threatened. Not the many strangers who stepped in her way, slammed the occasional door in her face, or the unwashed clerks short changing her at the local bodega.

Betty had even once threatened Al, her on again off again drunk of a live in boyfriend. He didn't laugh, nor was he fooled. After she got back from the hospital this last time, she never threatened him again. Not to his face anyway.

"Betty! Get me a beer goddammit." Al sat on the stained couch with his feet propped up on the coffee table comprised of an old door set up on four stolen unmatched milk crates. Holding up his empty Papst bottle and shaking it impatiently, he roared again. "Dammit Betty, get me a fuckin beer here. I'm empty."

Still in her grimy Burger King uniform stinking of grease Betty sat at the kitchen table. In front of her, a local community college catalog open to pictures of smiling young adults pursuing goals and making something of themselves. Her shoulders slumped when Al placed his order. For a moment she hesitated. For a moment she considered doing nothing.

Betty knew not to force it. She pushed her chair back and stood up. "Sure Al, be right there."

She opened the fridge and looked in. The four six packs she had seen before she went to sling burgers ten hours ago were mostly gone. Only three long necks left. He must be shit faced she thought. She grabbed a beer and slammed the door shut.

Betty delivered the beer to Al. "While you're up, take care of this." Al tossed the empty bottle at her. Betty moved out of the way. Flinging foam, the empty bottle sailed into the kitchen and crashed against the sink cabinet.

"Jesus Christ Al. Next time get your own fucking beer."

Al was just tipping up the beer to take that first belt. He stopped in mid tip. His eyes focused on her. "Now Darlin, you know I was just foolin around." Al smiled. His eyes did not.

Betty regarded him. For once she did not drop her eyes. Unconciously caressing her unhealed swollen cheek, Betty turned and headed to the bathroom. "Al, I'm taking a shower."

"Whatever." Al returned to trying to make sense of the next Ultimate Fight match on the TV.

Four days later, complaints of an awful smell brought local constables to 409 Chelsea. Officer Reed pounded on the door of Apt 3. Officer Reed knew right away, he was going to be calling in a stiff. The hall reeked of rotting flesh. From behind the scarred six panel door, "Yeah, Who is it?"

"Police! Is this the super's crib? Smells like you have a stinker."

"Yeah. Just a moment." Several deadlocks unlocked and the chain lock slid out of engagement. Eddie Larazco, the super, opened his door just enough for him to slide out into the hallway. "Uh, yeah officer. Upstairs." Eddie scooted up the hall towards the stairs fumbling with a huge collection of keys.

Officer Reed smiled. The cloud of pot smoke that fell out of Eddie's apartment was a welcome respite from the overwhelming stench of meat left out for too long. He pulled out a handkerchief.

Eddie opened the door of Apt 2A. The foul air that had previously just wafted out of cracks, under doors and through walls was but a tease. A putrid and fetid death musk rushed out into the hall. Immediately Eddie vomited. Officer Reed pushed past him just as Eddie got into a righteous round of dry heaving. One hand with the hankie over his face and the other resting on the grip of his Glock, Officer Reed cautiously worked his way towards the sound of a TV or stereo left on for four days.

In the living room, Officer Reed found Al sitting on the stained couch with his feet propped up on the coffee table comprised of an old door set up on four stolen unmatched milk crates. His head was tipped back. Protruding from his mouth was the last 2 inches of a Papst long neck. Tipped up against Al's leg, a bat leaned gently. Al's favorite Easton aluminum softball bat. Attached to the bat, stuck hard with some scotch tape a note declared, "I told you I meant it." 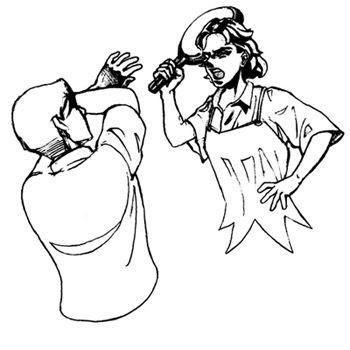 Maybe I should explain the spark for this piece. If not for you, then for myself, should I ever decide to revisit.

I took an incident of normal Mom payback and turned it ugly. My oldest brother had mouthed off to my mom. At over six feet and many years younger, he was able to avoid the weak swing of a mom 12 inches shorter and many years older. He should have known better. A week later she asked him to straighten a picture on the wall. Just as he stood up on the step stool, she cold cocked him and knocked him off that stool. Standing over him, "That's for giving me guff last week."

As my grandmother whom I never got the chance to meet, had said, "you'll never be so tall that I can't reach up and knock you down." Allegedly she always kept her word.

Only Graves could think of something like that.:) Nice piece. Welcome back. Just got back into the mainstream myself after a training hiatus.

Well, I got along good with my grandmas and never talked to a mate like that and expected her to fetch things for me, but my wife sure did get pissed a lot when I stayed after work for some beers with the crew.

Never mind that she was home getting soaked in her own booze.

Cormac - I never met either of my grandmothers. Dead long before I came along. Odd, but not many family tales centered on them.

Constantly maintaining a cheery demeanor even here in blog world can be more than I can handle. Time outs do come in handy when grumpy gus guy takes over.

BBC - Sadly there are more monkeys that do sit and expect to be waited on hand and foot.

Pardon my roaming mind but as I read your story all I could think of after were the hot CSI babes doing their work dressed in low cut blouses and tight jeans.

What can I say, I'm a pig and the story was that good.

Sincere compliments, Crum. I rarely read these FFF posts, but I have a feeling that I've been missing out. Very, very well done.

My mother tells of growing up in Nova Scotia and visiting her great-grandmother on weekend afternoons. "Granny" had given birth to ten or eleven children, had a lousy husband who left her and the kids in the early 1920s, but then managed to make a very comfortable living as a bootlegger. She was less than five feet tall, and everyone went out of their way to be polite and helpful around her. My mom says that no one ever dared cross her: deep down, everyone was terrified of her.

Great story! I loved it. I'm glad that bastard met his deserved ending..

Yes, you did a great job with the smelly descriptors, including the greasy Burger King uniform.

My only question is where do you find Pabst in bottles?

Beach Bum - We males cannot deny our genes can we?

El Cerdo Ignatius - Glad you caught this one. And thanks for the shoulder pat.

Now that is cool. Having a bootlegging mammy in the family tree. You should write down and document as much as you can.

sunshine - women in general do not conjure up fear. Not sure why. When they get pissed, no matter how big, watch out.

ubermilf - Papst long necks are out there. Mostly though I assume they are sold at bars.

This writing thing is interesting. Each time I figure to focus on one thing over wverything else. This time I wanted to work on th esetting with as few words as possible. The smell was a large part of it.

A very interesting take on the sentence that has similarities to what I attempted. Yet, your boyfriend seems to be the more angry in the couple.

Great write, MRM. Totally enjoyed it.
All the best, David.