What follows is a meme of a kind I have yet to participate in. Awarded to yours truly because I know he secretly hates me, Cormac has cursed me with this story I am expected to continue for a time and then pass on to five other unlucky souls to keep it going. This meme was started by I, Splotchy. Head there or over to Cormac Writes who tagged me for a better explanation.

The glass landed on the main concourse floor and the strung Christmas lights around the mall made the floor glitter like a field of glittering gems. Out of Hot Topic came a huge tasseled-shod foot and the glass cracked like ice under the foot's immense weight. Above that antiquated shoe was a massive muscular leg, clad in green tights.

The elder Mrs. Hajba knows what this creature is and she screams out its name, yet no one understands her. Mostly because everyone else is too busy screaming, but also because the only person would understand, her daughter Anastasia, is across the mall at T.G. McFunster's...trying to find husband number four, lest her, and her mother be deported.

This being that apparently is unknown to America, stands some sixteen feet tall in bright green and red clothing that would be more suitable to the Renaissance. The brute is muscular and misshapen, with veins that bulge and throb at a preternaturally speed. Its skin is bright white, and its teeth silver and black like tinsel. The eyes of the beast have no pupils or irises to speak of. They could best be described as giant red, opaque Christmas ball ornaments.

Mrs. Hajba summons every brain cell that American TV soaps haven't manged to destroy yet and she yells at the security guard, "It's Ghost of Kreestmass Disappoint-ted!" 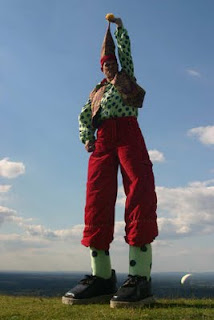 Christmas was especially hectic here at the largest Mall in the Universe. Jenkins had been temporarily transferred over from his normal eight hours of checking doors at the local high school to double shifts here at the mall. On any given day starting in November, as many as 1,ooo,ooo shoppers a day flocked here to drop their credits in one or more of the 3000 shop til you drop stores found inside it's ten story 5000 acre complex. Increased traffic meant more shoplifting, assaults, and an uptick in the usual run of the mill bag thefts and purse snatchings. Jenkins definitely did not consider the quarter an hour raise to be enough compensation for what he had to put up with here. Nodding off sitting on a hard chair at the high school seemed like heaven about now.

"Jenkins, that you? What's the problem? Jeezus guy, hold the mic away from your mouth some. I thought we went over that. The feed back is terrible."

"Uh, well okay, gotcha Base. Seems one of those new Tron androids got loose. Looks like the big one in the window display as a matter of fact. He's headed for food court 23."

"Jenkins, that display cannot move. They promised us that it was completely non-functional. Get your shit together and check it out."

"Base, that display maybe is supposed to be inoperative, but I tell you something big has just made a helluva mess from Hot Topic to the big tree display here on floor five. I see some woman up ahead waving at me. Maybe she has a clue. Jenkins out."

"Lady, lady." Jenkins shook the woman on the floor. She turned her head in Jenkins' direction. Panicked shoppers continued streaming by them in the opposite direction of the commotion closing in on food court 23.

And that's it for me.

I only tagged four folks. Why? Because Splotchy bogarted so many when he tagged basically the whole blogosphere, I did not want to do a repeat tagging. That would be so gauche.

Email ThisBlogThis!Share to TwitterShare to FacebookShare to Pinterest
Labels: Blogging, fiction, Pop Culture, Tag You're It

Yes, thanks for that. I haven't even had chance to read all the FFF from last week yet to leave comments, I've submitted a starter sentence for this week so will be going for that challenge, I'm trying to finish a christmas story for Thrillers, Killers 'n' Chillers and now this. The only thing is, I have a really bad problem....I can't say no!! I will attempt something.
All the best mate, David.

Now I'm going to have nightmares of giant Hop Topic-ized robot emo teenagers striding across the land. Thanks a lot.

MRM, my little piece is up. I think I took the get out clause, made something up and let someone else take it further. Hope you enjoy.
All the best, David.

Me tagged? Totally cool and awesome, will get on it this weekend.

I see you was wise enough to not tag me, knowing that I would tell you to go to hell, ha ha ha

Crap, I have too many things to do now that I don't keep up with.

I am jealous of the awesome picture you found.

Very nice! There's nothing that sprinkles wonderment on a story more than androids! Thanks for being infected!

Thanks for following up, and...

"I did not want to do a repeat tagging. That would be so gauche."

cormac - my comment was a kind of inside joke to myself. One of my first taggings, I brain skipped or was it more that I had not a flippin clue, but anyway I tagged exactly the same people the person who tagged me tagged. Not just one or two, but every single one excluding myself.

Terrific job. Terrific site. The graphics alone are worth the visit.
Thanks from number nine.