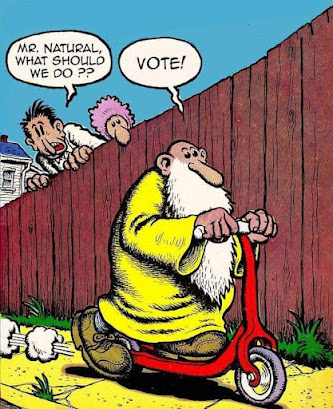 Now that I have participated in many election cycles over the years, I would think I would be immune to the campaign rhetoric that does its best to scare me into voting a certain way. Both the Democrats and the Republicans do it. Only the Republicans will probably definitely utilize baseless fears supported by bald face lies and then  will predictably not live up to any promises they make to the 90% of the country that really needs their help the most.
With the Democrats there is at least a snowball chance more of us will benefit, as has been the case in the two years since Biden was elected. The Democrats are the most likely of the two parties to work in bipartisan ways. The GOP only wants bipartisanship if they can dictate all the rules. They have become the party of no program, no sense of direction, the party that only knows how to say no. Their goal is to disrupt and control. Nothing else, contrary to their claims otherwise.

I know, I know, the Right would have us believe the world started falling apart once Biden and his evil cabal of socialist pinko commie pedophile liberals stole control of this country from the only God fearing patriots in the country, the GOP.

They know for certain if God is on your side, the other side must be wrong. It matters not that many on the Left go to church also. God is a selfish god, a Caucasian god and an American god who only likes white people because they are most likely the people to have deep pockets.

The Wingers blame Inflation and high gas prices on Biden. They still insist that he stole the election. Yet, many of them contend the Jan. 6 traitors were but overzealous tourists. It matters little that they are all either, knowingly lying through their teeth or are so stupid they actually believe their leaders' lies.

The Right's consistent and conscious movement away from using truth in their messaging has done what it came there to do; convince a sizable number of citizens that their lies beat any facts that may be used in rebuttal. Alternate Facts and Unfacts rule, Honest Facts drool.

In the meantime, the Left still seems to be in a daze. They are not focusing well. The Roe decision is an important motivator, but not as high on the list as bread and butter issues like inflation, immigration, gas prices. Yes, these issues are not any one person or organization's fault. But the Right has succeeded in convincing their minions and now some others, that Joe Biden and his democrats are the sole reason it costs $120 bucks to fill up that pickup with the duallies and the bull balls hanging from the hitch. No, the Left seems to have no answer for this campaign of hateful lies gushing out of the dankest, lowest sewers of the Right. It is hard to debate the truth of something when one side only pushes lies.

The media is no help either. They help feed the fires by allowing blatant lies to fester and go mainstream through local advertising and by just regurgitating the falsehoods on the evening news like they have some weight. They don't care. They toss us polls that hint that one party or the other is overtaking or being overtaken by the other party. The fact that polls have become wildly unreliable in forecasting the finishes in recent years, again, they just don't care. Stirring the pot  of Anxiety is what it is all about. They want to create the accidents we all have to look at no matter that we shouldn't. Controversy based on hate and discontent sells and who cares if that controversy is based on lies? Lining the pockets of the oligarchs who own the medium is the first priority.

With just over a week to election day, there are not going to be many minds changed at this point. I gave up trying to change minds six years ago. I rant and rave against the stupidity of the sanctioned falsehoods fostered by the Right and then vote against them wherever there is a box to check off.

No matter how it turns out, on November 8th I guarantee when a Right Winger loses, claims of cheating will follow. They have allowed their pitiful excuses of leaders to poison their reality and twist it into some bizarre notion that suddenly Democrats are incapable of winning without cheating; even though most cases of recent voter fraud have come from the Right.

The only light at the end of the tunnel I think is the prospect for a huge early mid term turnout. If this is what happens, historically this favors the Left. Keep your fingers crossed.

Tom Petty provided the tune for today's post pick. "I won't back down" pretty much sums up my attitude about any cooperation I may be inclined to offer the Right. A reminder of sorts that they have given this country nothing but lip service for over 40 years. 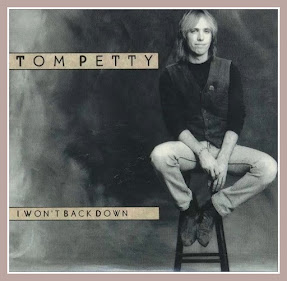