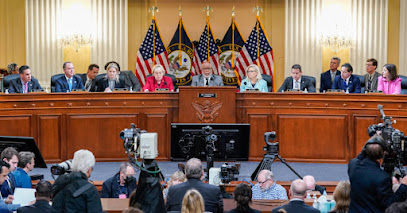 I just finished watching the most recent session of the January 6 Committee from two days ago. Damn compelling television that beautifully and succinctly created a strong, almost unbreakable case for placing the blame for that day of Treason totally on Trump's shoulders.

I am guessing few minions of the Winger kind watched the two hours of evidence being piled sky high against their champion. And That's okay. I long ago gave up caring what they think. What I saw this evening was a wonderful illustration of how our country can work for everyone if it puts its mind to it. ....... Damned if watching this didn't restore some of my lost faith in my country. Maybe we can survive the idiots who would tear us down.

At the end of the wrap party, they put forth a resolution that indicates their work is not done, just done for now. They resolved to subpoena Trump.

Watching the committee members offer up evidence of Trump's culpability in such damning ways, well, it was just awesome is all. ............. Just awesome.

It ain't even close to over yet. Stay Tuned. 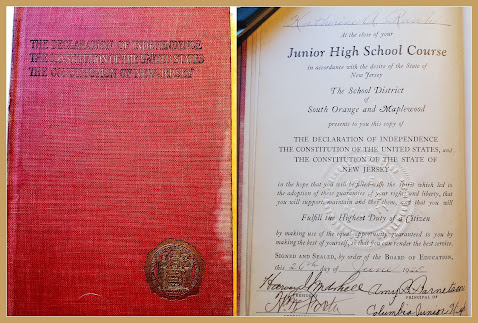 On another note kinda, sorta related to what I saw on MSNBC this evening is regarding an odd book I found earlier today among the shelves that hold the many history, geography, economic and math books my father and I had collected over the years. It is an odd little red book published in 1925 that contains without comment or instruction:

~ The Declaration of Independence

~ The United States Constitution (with all amendments up to that year)

~ The Constitution of New Jersey

Inside is a certificate that points to this being a textbook for a specific course in civics or social studies issued at a junior high in New Jersey. I have no clue how it ended up in our book collection, but I thought it was a wonderful snap shot of what education in the 1920's expected of its junior high students.

The certificate is signed off by local mucky mucks of the South Orange and Maplewood school district in New Jersey; with a seal punched conspicuously into the page noting officially that Katherine R??? was successful in her efforts to learn about these important documents.

I have have re-read the Declaration of Independence. I will get into the Constitution tomorrow. With just the Declaration read, I am reminded that these great documents form the foundation our system of government is based on. To not at least have a general knowledge of their content is probably one of the reasons we are in such dire straits today. Too many people call themselves patriots, yet many have no clue how to really be one.

It has been years since I just sat down and read them. I am surprised at my reaction given my somewhat jaundiced view of late regarding America and its citizenry.  Watching the January 6 committee actually utilize parts of these documents to address the egregious and treasonous actions of one man trying to destroy our system of government was the best recap of the civics I learned in school as a kid.

I sit here humbled and sad about my recent lapse in belief in my country.

Okay, Okay, got kind of sappy there, but that's what today's experiences did to me.

There are apparently more rock songs about America than there are stars in the sky. I had no idea there were so many patriotic Rockers and Pop idols out there. Cool. It just made zeroing in on a song for the post a bit harder to accomplish. I settled on what I consider the song that should replace our current anthem. And no one does this tune justice like Ray Charles does. Here is "America the Beautiful", as only Ray could sing it. 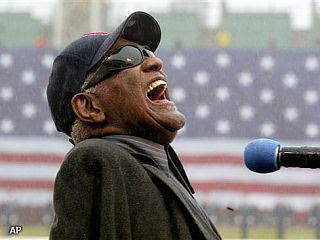 Email ThisBlogThis!Share to TwitterShare to FacebookShare to Pinterest
Labels: Events that turned me into a Progressive, FB, Music, Politics

after I watched it I sighed real big and said 'ain't it grand?'...and Ray..omg Ray singing that song makes me weep.