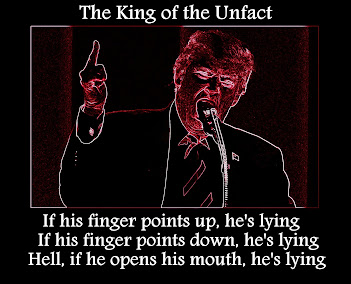 Unfacts are defined in the online dictionary of Merriam-Webster as;

: a deliberate falsehood made to pass as fact (as for partisan or propagandistic purpose)

Why the use of this word has not caught on, especially now, is beyond me. It is a more accurate description of the kind of lies masquerading as truth being pushed by, well, almost everyone it seems. It beats "Alternate Facts" hands down. There is no equivocation that might lend the term even the smallest amount of dishonest interpretation. The word "unfact" is clear, concise and accurate when trying to be polite while calling out a liar. It has been in existence since at least 1895.

Calling someone out as a liar often leads to heated verbal exchanges becoming exchanges of blows, bullets, and/or rocks. Liar is a trigger word that liars particularly take offense at. Much chest thumping and other buffoonish behavior can result when a liar actually is called a liar. To avoid the violent responses as much as possible, we have come up with many different words that mean liar. They all are less likely to create the fury that being called a liar does. I do not know why. A liar is a liar and they should be no more offended than when hearing themselves called fibbers, prevaricators, or perjurers. To call someone a liar to their face seems to be the worst only surpassed by adding my favorite adjective and calling them a Fucking Liar.

All in all, there is really no nice way to call someone a liar. And as a rule it is always safer to call someone a liar from the safety of a computer screen based miles away from the targeted liar. It has been my personal experience that liars seem to be the most indignant when called out and the most likely to behave unpredictably.

A lie is the verbal equivalent of stealing. Both are dishonest and despicable actions that can cause much pain and anguish long after the initial offense. The effects can last for years, yet, our human culture does not seem able to live without lying, cheating and stealing. Dishonesty has a place in our culture whether we want to admit it or not. We will often get huffy when the lie affects us personally; yet often we will ignore the same effect in others over our lies.

Nowhere is the use of the Unfact more prevalent or obvious than inside America's Politics. Both the Right and the Left are experienced and often overly enthusiastic users of the unfact. And sadly, the Right seems to have given up on facts altogether and are now relying on the unfact to fit their needs in filling the heads of their minions with exactly the kind of fear that will drive their agenda the best. They are the masters.

While it appears the Right has more bald faced lies floating around than the Left does, the Left is still more than capable and eager to push unfacts when they feel the urge. And I seriously think that many on the Left are jealous of just how good the Right has become at spreading false information and accusations. An example of the Left's effort to match the Right when it comes to lying is this image Meme that passed through my Facebook page a few days ago. 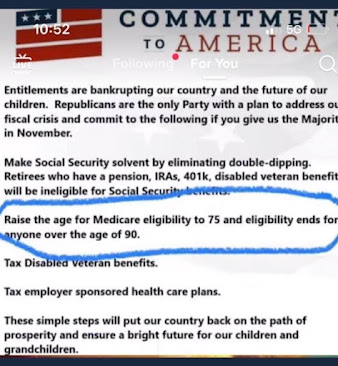 It pretends to be a bullet list of GOP goals for the future. It is a fake, but a much slicker lie than what the GOP usually comes up with. The usual lies from the Right are on the surface bald face lies. They don't even try to hide them anymore. Regardless it is wrong no matter who came up with the lie and was doubly wrong to be allowed any oxygen at all.

I have no right to call out people who spread meme's containing false information, uh, lies on social media platforms. I have missed a few. I am more careful now about what I do share online in the way of facts. This meme to the right for instance; I caught before I posted. It offers up talking points that have been bounced around on the Right for years. But in this configuration pretending to be official GOP policy, it is a lie no matter that some would consider it only misleading. In my opinion, misleading is lying and sometimes even worse than a straight out lie. It should not have been allowed to be posted.

I think all of us who spend time on Facebook or any other social media site need to be more concerned and cautious about spreading fiction versus being used to spread lies that in the end do none of us any good.

A world based on lies seems like it already has one foot in the grave.

Musical choice today is "Lies" by JJ Cale, an artist whose life was music. Much of his time was spent in the production booth, not in front of a mic. But he still managed to publish over 30 albums in his lifetime, all the while doing everything he could do to limit his exposure in the limelight. 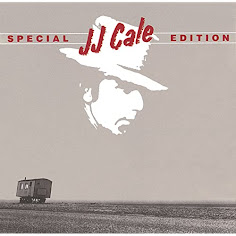 I calls a spade a fucking shovel...so yeah, I calls them liars.