It's a Dirty World 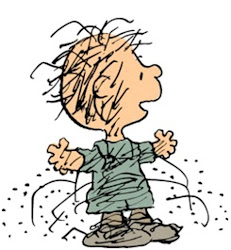 Like the character Charles Schultz highlighted in Peanuts, no matter where I lived, I held the title as the local Pig Pen. No one could find dirt, muck or mire as well or as fast as I could. If a group of us were out playing, I'm the one who found the mud hole to fall in. If we climbed trees, I climbed the tree covered in sap. Wearing anything new always ensured it would not be in an hour or so. My mom often did not dress me for those spiffier occasions until minutes before my entrance. And even then, I would find something to smear, spill, or rub onto that new Easter suit she had hidden until 5 minutes ago.
It always irritated me that my apparent magnetism for all that is dirt was beyond my control. I would consciously try to come home at least recognizable. But 4 out of 5 days, I couldn't. At some point, I just gave up. Destined to be a slob, I resigned myself to a life in slob-dom, I no longer worried about the mess I brought home after a day out there in the unforgiving world. I became used to stripping in the garage or out on the back porch before setting foot inside.
I gave up wearing anything that would be considered going out clothes. Any new clothes I would wear found me anxiously waiting for that inevitable moment of defilement. My favorite pieces of clothing became my ripped and stained jeans, overalls and Tees.
Even with overalls on, I still found ways to defile the duds underneath.  Once I floundered with a small detail paint brush while attempting to hit a spot above my head.  I dropped it.  It fell inside my overalls.  By the time I managed to extricate it, it had traveled down my belly into my left pant leg.  I had white paint all over the inside of the overalls and on the outside of the clothes under the overalls.  I ended that painting session with paint on all my clothes, on my hands, in my hair and I think I might even had some paint drop in my mouth as the paint brush passed my mouth on its way to the top of my boot.
And now that I am retired and not as vulnerable to the evils of the Dirty World, my pigpen tendencies continue unabated. Instead of paint on my pants, grease stains on my tee shirt, I now employ the many and varied ways food can pollute my finery. Spilled coffee, dripping cheeseburgers, and soup running down my chin are all co-conspirators in the campaign Dirt has waged on me in my past and will continue to til the end of my days on this planet.
It's a dirty world out there. I better get used to it.
_______________________________________
Music for this post became a case of  "settling" for a tune, any tune , that insinuated some kind of connection to dirty, sloppy, or anything in between. I picked "Dirty" by Grandson, another new group I found because of my policy of tagging music to my posts. Solid lyricist, good pounding music. What more could I ask for? 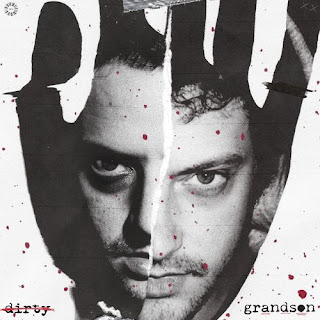 So glad there are other people like that. You are a comfort to me.
Eating is a disaster for me as no matter how hard I try, I always drip something on my shirt. I need a bib.
Dirt and grease were always present on a farm and were expected but my school and church clothes suffered too.
When I was a grown ass man, the crew and I were cleaning corrals. I was on a pitch fork, clearing stuff that was too close for the loader to scoop. When I went home for lunch, I had to strip naked in the garage and run across the lawn (we lived in town) hoping no one saw me.

I'm clutter person.
Coffee is on and stay safe