The Gates of Love 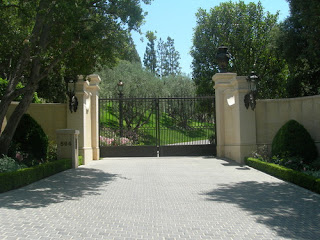 " Their gated mansion is not just a testament to affluence, it is a house of love. "

I read this phrase I paraphrased in an article about an aging Pop star who had amassed a pile of money her heirs will have trouble spending.

I found the phrase odd.  Maybe it is just me, but the first thing I think of when passing a gated anything is not love.  Gates and Love, well ..... it seems Love can only exist if gates are left open in some way.  Physical and/or emotional.

So when I pass a gated mansion or community, the notion of Love is not even on my radar.  That isn't to say Love cannot exist inside this gated area, but the notion of gates and walls seems almost antithetical to the grandness of Love.  It would appear to me the only love that could really exist inside a gated house, community, etc would be a very narrow beam of it.  Love would stop at the fence, the guard house, not to be shared with those who pass by.  As it turns out, that gate also seems to keep a large portion of the Love available outside it's perimeter from getting in,  Both sides lose.

They love themselves, not the rest of us.